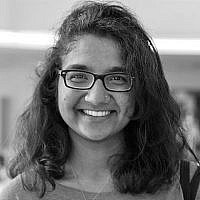 The Blogs
Amna Farooqi
Apply for a Blog
Advertisement
Please note that the posts on The Blogs are contributed by third parties. The opinions, facts and any media content in them are presented solely by the authors, and neither The Times of Israel nor its partners assume any responsibility for them. Please contact us in case of abuse. In case of abuse,
Report this post.

A few weeks ago, soldiers hung notices on the doors in Al-Walaja, announcing their intent to seize the land for “public purposes.”

My first experience in the occupied territories was in Al-Walaja, a village partially in East Jerusalem and partially in the West Bank. It is surrounded on most parts by the separation barrier, which cuts off many villagers from accessing their agricultural lands. Ir Amim, a group of Israeli activists and advocates who oppose the occupation, organized trips for those interested in going to help the Palestinian farmers in Al-Walaja cultivate their lands. Most farmers had stopped going since the barrier was constructed, knowing that settlement expansion was coming; they had seen the seizure of their land and the establishment and expansion of the settlement of Gilo just next door. I decided to go.

It was in Al-Walaja that I first heard the stories of Palestinians who were trapped in a village where neither the Jerusalem Municipality nor the Palestinian Authority completely took care of them. There I met Yasser Halifa and Abu Nidal, men in the village who welcomed us and spoke about the challenges of providing better lives for their children. Abu Nidal’s son shared stories of his struggle to find work in a community where people are not even given permits to enter Jerusalem. Getting a job through the bureaucracy of the Israeli civil administration was difficult. People with families are given priorities for work permits, but as a young man, how was he supposed to start a family without a job?

It was in Al-Walaja that the sheer human cost of the occupation, and the effects of the settlement enterprise, first became painfully evident to me.

Watching young Palestinian children race around against the backdrop of farmland, olive groves and rolling hills, a few feet away from the Green Line itself, I felt pleasantly calm around their mischief and laughter. The political reality these children will grow up in shattered that calm, however, when an Israeli activist turned to me and said “It’s a shame, this will all probably become a settlement.”

The activist then explained to me how the takeover of Al-Walaja was most likely to happen; the land would seized for a national park, established by the Israel Nature and Parks Authority. This would prohibit Palestinians from entering their own agricultural lands, and declare it for Israeli tourists and residents of Jerusalem only, making it Israel-controlled.

Now, that is exactly what has happened. Haaretz reported that soldiers this month hung up a notice of intent on the doors of houses in Al-Walaja, announcing that the land would be seized for “public purposes”- to continue building the separation barrier that will further isolate Al-Walaja from their agricultural lands and enclose them, in tandem with the establishment of the park.

What is happening in Al-Walaja follows a trajectory that has become all too familiar. It is through slow but steady actions like this that the realities on the ground in Israel and Palestine get altered. While this land may be declared for a park, it won’t be long until tourist attractions are established and the Palestinian presence diminishes, until finally it is gone for good.

Settlement expansion is bureaucratically protected in a myriad of ways, but it often happens through gradual, often below-the-radar measures like this, which can be easy to miss or ignore. Families are evicted and houses are demolished a few at a time until whole communities are devastated. Illegal “outposts” become official, and are connected to larger settlement blocs by roads and power lines, until they become almost indistinguishable from the blocs themselves.

We cannot continue to be willfully blind to these acts designed to obstruct the two-state solution and erode the Palestinian presence in key areas of the West Bank. No longer can they fly under the radar. We have to stop looking the other way and bring these destructive acts into the light of day. Only public condemnation and attention can help put a stop to them.

Real people’s lives are at stake. There is a moral responsibility for all people invested in a two state solution, in peace and democracy for both peoples, to stand up in cases like this and oppose these seizures designed to change “facts on the ground”.

It’s vitally important that supporters of Israel in the United States and around the world officially recognize the Green Line, and insist that it is part of how we teach and talk about Israel and the Israeli-Palestinian conflict. It will remind everyone that the line serves as a basis for negotiations, and that there is a need for solution for contested, occupied territory. It will also highlight the kinds of actions that erase it: barrier construction, land seizure, evictions.

Last summer, I spent my last day in Israel and the Palestinian territory with two J Street U students, driving along the Green Line and through winding roads to go see Al-Walaja, and talk to the people who live there. Abu Nidal took us in warmly and spoke to us about his family, his life, the need for a two-state solution. He desired peace, but was pessimistic. We have a responsibility to do everything we can, with the support that we can give, to help make it happen.

Amna Farooqi is a senior at the University of Maryland, College Park, and the president of the J Street U National Board.

About the Author
Amna Farooqi, a senior at the University of Maryland, is president of the J Street U national board.
Comments