“I am not very religious.” Azur Cenudioglu said, whose family has been living in Antakya since antiquity. “But I do my part. I pray in the morning and say the evening prayers and we do what we can.” After all, “we have been here for 2300 years!” he added.

Antakya once boasted a large Jewish community, the Talmud tells us about Rabbi Gamliel, Rabbi Akiva and other great sages who visited the city. But there is no Minyan in Antakya anymore. There are only 14 Jews left, 7 of them are men “At least 500 people lived here.” when Olga Cemal came to Antakya from Damascus in the 1970’s.

Azur, Olga and 12 others are the last members of the Jewish community of Antakya – the seat of power of the Seleucid Empire, and of Antiochus IV Epiphanes who is responsible for our Hanuka holiday – and they are not about to give up on maintaining Jewish life! 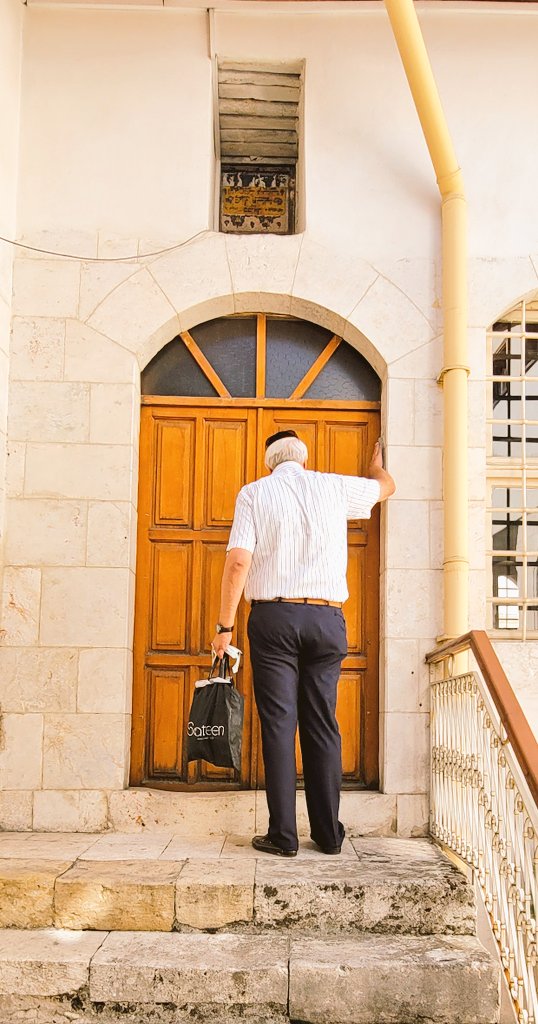 Olga came from Damascus (where her brother, one of the last 6 Jews, just recently passed away) some 35 years ago.

In Damascus, she was a teacher in the Jewish boys school. A traveling Antakyali businessman came through Damascus introduced her to her husband, and she remained.

According to Olga Antakya was a very strong religious community who was linked to the scholarly center of Aleppo (we spoke about it yesterday). “They studied in Aleppo and then came back here.”

Azur, who is also a cousin of Olga’s husband, is worried that without a Minyan. He won’t be able to hear the Shofar on Rosh Hashana, “do you have a shofar here? Maybe we can hear it now, in month of Elul!”

We have a shofar, which we took with us from Istanbul – and we blast off.

Olga then wants to hear the Shofar as well.

There is a small room for daily prayers. It looks like it hasn’t been used for a while. The bigger hall is used regularly.

The holy Arc, where the Torahs are kept, is a small niche (such as we saw in Kilis and Gaziantep).

And we take off our shoes when we walk in to this holy of holies.

The Torahs are very old. One has a an inscription from 350 years ago, which carry the names of donors and scribes. Other scrolls are even older. They are hand written written on deer skin, and the script still looks fresh, as if it has been written just recently.

Without a Minyan the Torah isn’t read from the scroll, but technology fills in the gap – Azur listens to the Torah being read live in Jerusalem… “Hazak Ubaruh”, may you be strong and blessed, he utters towards his iPhone, in the usual manner one would say to the Torah reader.
But look at what hangs all around the synagogue.
(The music is from Azur’s phone. Apparently, he is watching a Bar Mitzva celebration broadcasted live from Jerusalem.)

These thin looped metal hangers are surrounding the synagogue – hundreds of them! These are cup holders, some loops have cups filled with oil and cotton wicks.

Olga explained: The evening before Kipur, we fill them up – on Kipur eve at 3 pm. They come and light them all.” she said. “It is so beautiful!” and her eyes lighted up.

Lighting candles, or cotton wicks in cups of oil is a big deal in Antakya. It is the first thing Olga did when she came to the synagogue. It is also what Azur did immediately after he prayed.

Advertisement
Lighting candles is done in many Jewish synagogues in Turkey and elsewhere. But I have never felt it so intense as I did here in Antakya.
Perhaps it is the power of 2300 years of Jewish spirit…

Speaking of spirits we can’t part without prayers for the deceased and blessings for the ill.

When Olga heard that we were on the #TurkeyJewishRoadtrip, she immediately sent a message – “Don’t forget to bring a knife, we need chickens!”

It has been 6 months since a Shochet was in town to provide Kosher chicken relying on fish for the Shabbat meals instead.

I am glad I was able to be of help!

We did ‘Kaparot’ (I’ll speak about that in a future thread). We covered the blood and we now have Kosher chickens, which Olga will salt and rinse at home as customary for Rosh Hashana and the upcoming holiday season.

2300 years of history in the making and this Jewish community is not about giving up. Not at all.
“We read Tehillim. Daily and weekly. We eat kosher”. 3000 years of tradition and they are going strong. “Çok Sükür” says Azur.
Thank God. Baruh Hashem.
Shabbat Shalom!
About the Author
Mendy Chitrik is the Ashkenazi Rabbi of Turkey and Chair of the Alliance of Rabbis in Islamic States. Follow me on twitter at @mchitrik
Comments