Just over a month ago, I returned from a long overdue trip to Vilnius. My last time in Lithuania was eight years ago, in the summer of 2013, when I was quietly researching material for my book The Nazi’s Granddaughter: How I Discovered My Grandfather Was a War Criminal.

I had been invited to present a seminar about my findings on Jonas Noreika by The Olga Lengyel Institute, a nonprofit organization based in New York that instructs teachers how to introduce, clarify, and deepen a classroom discussion about the Holocaust.  About thirty high school history and literature teachers from all across Lithuania had attended the five-day seminar. I was left with the impression that they appreciated hearing my story. At the end of the program, one of the teachers confessed that it’s hard to believe that Jonas Noreika, whom she thought was a hero, had participated so deeply in the Holocaust, but she is working on integrating this new information.

During the trip, I met with American Ambassador Robert Gilchrist, who said he has been spending half of his time in Lithuania attending to the Holocaust. This past year was the 80th anniversary of the Holocaust in Lithuania. Between June and December 1941, most of Lithuania’s Jews had been murdered, even before the Wannsee Conference when Hitler decided to implement the Final Solution across all of Europe. Part is the conference’s inspiration came from how quickly Jews were murdered in Lithuania. Lithuania has about 200 killing sites in its forests where 220,000 Jews lay.

I also met with Emanuel Zinger, chair of The International Commission for the Evaluation of the Crimes of the Nazi and Soviet Occupation Regimes in Lithuania, as well as Ronaldas Racinskas, its director. This commission was appointed by the President of Lithuania, Valdas Adamkus, on September 7, 1998. This group responded to the Genocide Centre’s handling of the case in defending my grandfather against Holocaust distortion on April 19, 2019: Response to The Statement of The Genocide and Resistance Research Centre of Lithuania of 27 March 2019, “On The Accusations Against Jonas Noreika (General Vėtra)”

The Ninth Fort in Kaunas

This commission had organized 80-year Holocaust memorial events across the country, and during my recent visit, I had attended the last event held in Kaunas at the 9th Fort, where Nazis and local collaborators killed more than 45,000 Jews from Lithuania and other parts of Europe. The Lithuanian killing machine was so strong and efficient in 1941 that other European countries shipped their Jews to this country.

The seminar’s teachers and I drove on a bus from Vilnius to Kaunas and gathered at Democratic Square. Eighty years ago, all the Jews in Kaunas were rounded up and brought to this square, then marched to the 9th Fort, where they were lined up along pits and then slaughtered by bullets. We took the five kilometer walk, in memory of what the Jews suffered on their way to their death. It was a chilling recreation as I tried to imagine what the Jews must have felt on their march toward their own murder. Several dignitaries had attended and gave speeches, including President Nauseda. 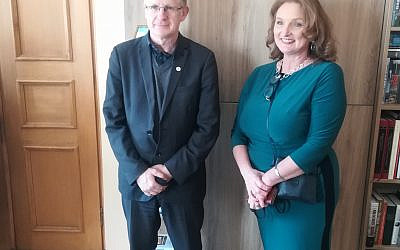 During the trip, I also had a meeting with the Genocide Resistance and Research Centre’s director Arunas Bubnys, as well as historian Alfredas Ruksenas.  Andrius Kulikauskas, researcher for Grant Gochin’s lawsuit against the Genocide Centre, had organized the meeting. A representative from my Lithuanian publisher Kitos Knygos had attended, as well as my aunt who was able to verify the story that my grandfather had appropriated a home formerly belonging to Jews during the Plunge massacre in July 1941. We are currently in discussions about the Genocide Centre writing a forward for the book.

I am so privileged to have this book translated into Lithuanian and released by Kitos Knygos, which translates into Other Books. This publisher is known to publish books off the beaten track to present a viewpoint different from the mainstream. They have taken a courageous step in bringing this book forward.

For most Lithuanians, discovering their country’s role in the Holocaust is distressing and traumatic, but during this trip, I saw and felt that it is possible to discuss this openly and carefully, and I returned with much hope.

The Nazi’s Granddaughter: How I Discovered My Grandfather was a War Criminal is available. The book will be released in Lithuanian by Kitos Knygos in February 2022 under a new title: Storm in the Land of Rain.