Topography is history.  As long as there has been a Jerusalem, there has been an ascent to Jerusalem, and that ascent begins at Latrun.  Latrun is a hill in central Israel where the plains meet the mountains.  Whoever holds that hill holds the road to Jerusalem. Today Latrun is a battlefield museum and memorial.  The site contains an out-door display of tanks dating from World War I through to the present.  It is also home to the Wall of Memory, listing the names of soldiers of the tank corps (but not their rank) who died in Israel’s wars.   Looming above it all is the bullet-pocked British fortress that itself sits atop the ruins of fortresses of every empire that has sought to hold this strategic spot.  Even the name Latrun is a corruption of La Toron, Medieval French for “The castle”.   As a tour guide, I often bring visitors to Latrun to take in the beautiful views from the top of the fortress, let the kids climb on the tanks for photo ops, and pay respects to the fallen soldiers.

But last week I was there as a father, watching the ceremony in which my daughter marked the completion of her training as a non-commissioned officer.  My slight, sweet, cheerful youngest, who has never raised her voice in anger to anyone, is going to be drilling new recruits in the Israeli Army.

It was a raucous affair, with thousands in attendance, a bizarre combination of sporting event, award ceremony and mass picnic.   Many of the families brought specially made t-shirts, banners, and hats celebrating their son or daughter.   I was not so well prepared, and while I shared in the general sense of merriment, and brought a basket of goodies and a van full of friends and family, I could not escape the gravity of the moment.  The large outdoor stage on which the 350 newly-trained officers were awarded their stripes has as its backdrop the massive fortress.  The British had handed over the fortress to the Arab Legion in May of 1948 and the Israeli Army tried and failed five times to conquer it.  Among the soldiers who were sent into those battles were survivors of the holocaust, newly minted Israelis straight off the boat from the D.P. camps of Europe.  They spoke a Babel of languages, and could not always communicate with each other. They knew very little Hebrew and often could not understand their officers during the fighting.  In this catastrophe, men who had miraculously survived Auschwitz died on the field of battle in the newly independent Jewish state.  This too is part of the story of the birth of Israel.

While I take pride in my daughter’s accomplishments as a soldier, I wish more than anything that she did not have to do this at all.  It would give me great joy if she had the luxury of studying literature at some liberal arts college instead of running around with an M16.  But she has grown up in a time and a place where that is not an option.  Not yet and not here.  There is much work to be done in this country.  Peace, social justice, education, dialogue with our neighbors, dialogue with each other, becoming a “light unto the nations.”  Someday my daughter will be a soldier in these battles as well.  But last week she stood in the shadow of the fortress where others lost their lives so that she could have a home, and swore allegiance to the Israeli Army.   I am not a big fan of military pageantry or nationalistic symbols, but at that moment, I choked back tears.  Many of the soldiers memorialized at Latrun were as small and as sweet as my daughter, and some were even younger. She is, in her own way, carrying on their mission, and I am certain that she will continue to do so long after she has ceased to wear a uniform.  As the event drew to a close, I stood and sang the national anthem, “Hatikva” (the hope) as loud as anyone there.  I was not embarrassed.  My hopes for my daughter and my hopes for this country were one and the same. 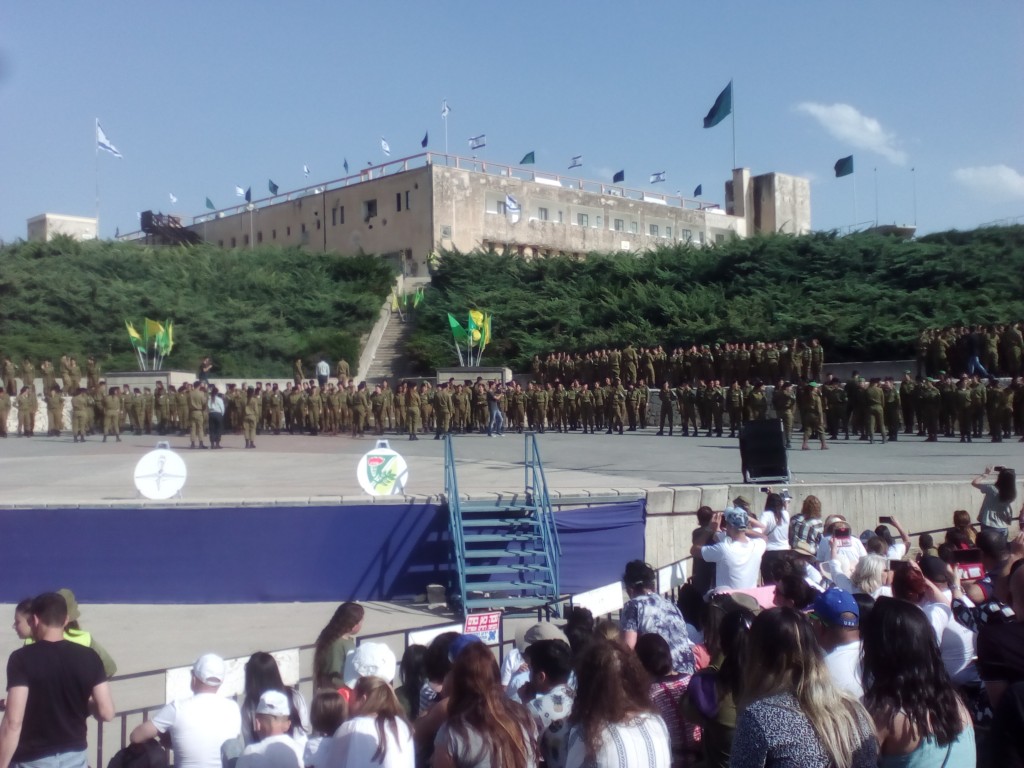 My daughter’s ceremony at the foot of the Latrun fortress
About the Author
Bill Slott is a licensed Israeli tour guide who has hiked and biked the length and breadth of the country. Bill is a member of Kibbutz Ketura, where he has lived since 1981 with his wife and three daughters.
Comments