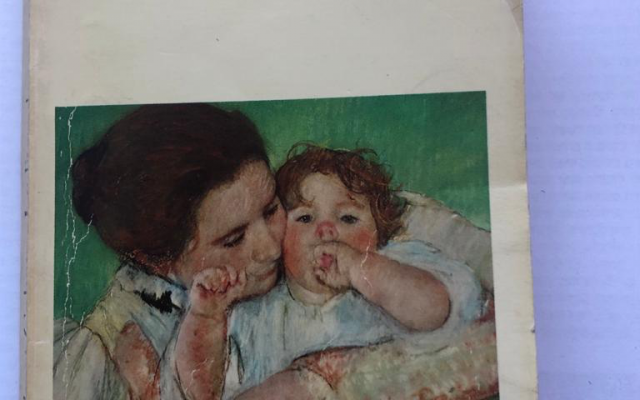 Albert Cohen wrote (or at least published) this book when he was about sixty years old. I don’t know when his mother died, but – as its title implies – the book is about his late mother and her devotion to him, embellished by his evidently deep-rooted sense of guilt at not having been as kind to her as he felt should have been in her lifetime.

Near the beginning the book we read about the burial of the author’s mother, with a graphic description of the scene at the cemetery, focusing primarily on the coffin and the hole in the ground into which it is lowered.

Chapter by chapter the author gradually unveils his mother’s character, appearance and habits. He describes the way his mother would prepare the house and herself for the Sabbath, wait to greet her husband and son as they returned from synagogue on Friday night and focus her whole being on seeing to the welfare of the two men who comprised her entire universe. The family lived in Marseille, where his father was a not-very-successful businessman and his mother tended to be isolated from the society of other people, largely because of her own feelings of inadequacy.

Scenes from the author’s childhood describe the utter devotion with which his mother attended to him, cared for him, depended on his happiness, and altogether appeared to be totally absorbed in making him the centre of her world.

A large part of the book recounts over and over again that the author was living in Geneva, first as a student and then as a member of the diplomatic corps, and from time to time (approximately once a year) his mother would come to stay with him for a few weeks. He describes in exquisite detail the image of his mother descending from the train, a somewhat pathetic and dishevelled figure, her clothes crumpled and her hat slightly askew, and how her eyes would light up when she espied him waiting for her on the platform. He describes her embarrassed little laugh when he pointed out some grammatical mistake she had made, and her complete desolation when he chided her for phoning one of his lady friends at four in the morning to ascertain that no harm had befallen him. He chides himself repeatedly for his behaviour towards her.

The reader is given several detailed accounts of those and other scenes, which evidently continued to haunt the writer. He describes the battered suitcase from which his mother would extract the various treats she had prepared for him in Marseille, many of which had been beloved by him in his childhood, and how she delighted in his joy upon receiving what she had brought him.

Above all, however, the author reiterates his guilt at not having shown sufficient appreciation for his mother’s love and devotion to him, and the indifference he had occasionally displayed towards her, to the extent that on one occasion he had even been three hours late for a meeting with her somewhere in Geneva. It is with painful honesty that he describes his youthful preoccupation with a certain young lady that caused him to keep his mother waiting for him for hours.

Towards the end of the book the author’s grief (or guilt) becomes virtually unbearable, and at the end of every sentence describing his mother we find the refrain ‘She is dead.’ The sense of overpowering anguish seems to transcend everything, extinguishing all other emotions. In one of the last few paragraphs the author acknowledges that we are all destined to end the same way, all bound to lie in a dark hole in the ground as our bodies decay and decompose.

As the book comes to an end the author admonishes young people everywhere, rebuking them for not appreciating their mothers enough, for not showing them that they love them, for neglecting to pay them the attention they deserve. Somehow, this becomes a homily, likening all mothers to saints, and even to the mother of Jesus.

I hope that by writing this memoir the author managed to assuage his conscience and allay his guilt. Without going into too much psychological analysis, the association with Oedipus cannot be dismissed out of hand. For me, however, it has been clear for a long time that it is guilt rather than love that makes the world go round. And it would certainly appear to be guilt that impelled Albert Cohen to write this book.