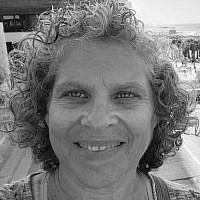 The Blogs
Laura Goodman
Apply for a Blog
Advertisement
Please note that the posts on The Blogs are contributed by third parties. The opinions, facts and any media content in them are presented solely by the authors, and neither The Times of Israel nor its partners assume any responsibility for them. Please contact us in case of abuse. In case of abuse,
Report this post.

Apparently, I can be judgmental. Since I was told this by my adult daughters, I need to decide what to do about it. If anyone else were to tell me this, I would wonder why they were saying it and what it says about them, more than about me because, surely, I’m not judgmental. But to discount these wonderful individuals, who I raised from my core to their core, would be like discounting my own observations.

It seems that as open-minded as I thought I was, I have facial expressions and make off-hand, slightly snide comments (which I thought were witty and insightful) that apparently attest to my judging people who are not exactly like me. People who spend their time differently than me. People who dress differently than me. People who drink more than me. You get the idea. I compared, often unfavorably, their behaviors to mine as if I’m the paradigm to which all others should aspire. (And I had also, clearly wrongfully, thought that my ego was a small one.)

As I think about this, I realize that it’s natural to notice that people aren’t like me. What’s wrong is the comparison hierarchy. I am me. You are you. Done. I certainly shouldn’t consider everything I do—or, depending on my mood or who I’m looking at, everything you do—as better (dare I say, best). Seems to me that herein lies the problem. It’s not about being open-minded and acknowledging differences, it’s about thinking that one way of being or behavior or belief is better than another. Acceptance is the goal and the true sign of inner strength and confidence.

Going beyond my personal experiences, I thought about the book I’m currently reading, Jewish Pirates of the Caribbean by Edward Kritzler. He talks about the reasons why Jews became pirates in the 16th and 17th centuries—about their trying to stay one step ahead of the Inquisition to find someplace where they could live openly as Jews. Which made me think in general about Jewish history and how Jews have been continually oppressed (a catchall word for so many horrors) for praying, or gathering, or eating, or speaking differently. Turns out that what I thought was a minor personality flaw to work on is really the basis of so much pain and horror over the centuries.

This demand that everyone be the same has surely killed millions of Jews (and others) over time. I know that there are many reasons for antisemitism, but in this moment, I’m focused on this attitude—this looking down on those who are different—and the unfortunate demand that they change so as to eradicate all differences.

Why this need to stop people from being different? What voracious inner voice demands appeasement when you see someone not do as you do? Is it a need for validation; a way to overcome or silence one’s own doubts? Is it a fear of being identified as different, in some way, themselves? Why is it not okay to believe or behave differently, to be other, to not be like you—to be fully oneself?

The danger in this type of thinking, this insistence on one’s way as the right way, the superior way, is not a small thing. It’s the stuff of so much harm.

Perhaps a way forward to a future that is not a repetition of the past is not to be constantly sitting in judgment, but to aspire to be like the parents of adult children: knowing that your job is done and that now it’s time for you to accept each child for who they have become. To honor and accept that they are distinct individuals. To be grateful that they are not identical models of us. To even think that they are an improvement. To be in awe of the differences and to respect them.

About the Author
Laura Goodman grew up in Queens. After college, she went to Israel for six months—which became 18 years. When she and her family relocated to Virginia, she got an MS in Conflict Studies, which she used as an English teacher and a mother. After recently retiring as a high school English teacher, she moved to Florida. As a volunteer, she translates Holocaust survivor testimonies from Hebrew to English, and writes for Israeli non-profits. Laura writes about being Jewish, Israel, and the work of being retired.
Related Topics
Related Posts
Laura Goodman