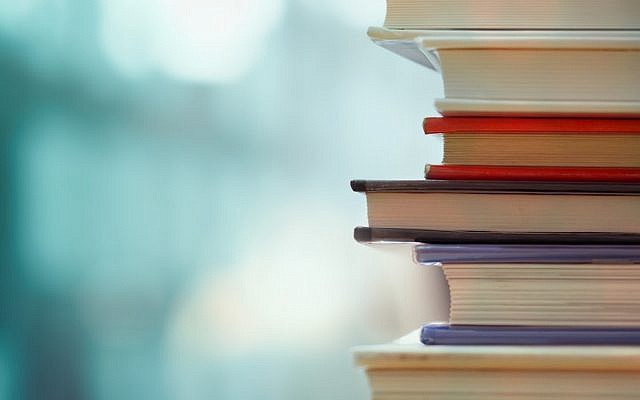 Illustrative. A stack of books. (iStock)

A few months ago, my brother gave me a well-worn pocket siddur, which he had recently discovered mixed among the books in his own library.

“Look at the inscription,” he said.

I opened the prayer book to the inside front cover and found an inscription from 50 years ago, written to me in Hebrew by my fifth-grade teacher, Mr. Lilienthal. Apparently, I was awarded the siddur as a prize for winning the school’s Bible contest that year.

I honestly do not remember winning the contest (a Bible scholar I am not!). And I’m still not sure how the siddur fell into my brother’s hands.  However, it was nice that I was able to retrieve the book with its personal inscription, and it made me wonder about other books in my library that also may have been personally inscribed.

I own a lot of books. One of the things that I like to do whenever I hear a speaker who has published a book, or when we have a scholar who has written a book over for Shabbat, is purchase one of his or her books — and get it personally autographed. So over the years I’ve accumulated quite a number of these keepsakes. However, I rarely go back to them once they are placed on the bookshelf. Perusing my library and rereading some of the inscriptions on these books was a fascinating journey through time.

I found a beautiful inscription on a book written by Rebbetzin Esther Jungreis, whom we had once hosted for dinner and who passed away about two years ago.

There was a book on my shelf written by Sen. Joseph Lieberman, who was kind enough to sign a copy of his book when I asked him.

I own all 11 books of one of my favorite Jewish writers and thinkers, Erica Brown, and given our friendship, I had asked her to inscribe each book as it was published. Looking back and rereading these inscriptions, I realized that each one was meticulously tied to the message of the book, which makes these inscriptions even more special.

There were two inscribed books on my shelf that were written by major Modern Orthodox thinkers whom I had greatly admired — and who each were unfortunately involved in a major scandal. How the mighty have fallen. Ironically, they were placed right next to each other on my bookshelf.

One of the autographed books that I treasure was written by a rabbinic hero of mine, Rabbi Yakov Horowitz, who had asked me to review his book and offer comments before it was published.

Then there is a book written by Rabbi Lord  Jonathan Sacks, whose wisdom I cherish; I heard him speak in New York City several years ago, brought a copy of one of his many books that I owned to the lecture and stood in line close to an hour to get the book personally inscribed. It was worth the wait.

Some of the inscribed books that I found in my library go back a very long time. I discovered a Birnbaum Rosh HaShanah machzor that I received as a bar mitzvah gift, inscribed by a family friend — and which I had used for many years to lead the High Holiday services. (In addition to the written inscription, the machzor also still contains the many notes I had written to myself with instructions about the services.)

I also discovered my high school yearbook, untouched for decades, but with many of the inscriptions next to individual photos still clearly visible. Most of the messages from my classmates were silly and mundane, but there were a couple of inscriptions from teachers who had a major influence on my life. And it was wonderful to read their kind words of appreciation and encouragement once again, decades after my graduation.

In an age of Snapchat, where images and messages magically disappear in a matter of seconds, and word processing, where words and sentences can be eliminated with a simple press of a button, there is something wonderfully comforting about inscriptions in a book, written with real ink, that you know will last for generations.

As we celebrate the High Holiday season with a sense of awe and reverence to the Almighty, let us hope and pray that the ultimate Author inscribes our names in His book — the Book of Life.