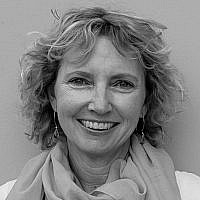 The Blogs
Orli Gold Haklay
Apply for a Blog
Advertisement
Please note that the posts on The Blogs are contributed by third parties. The opinions, facts and any media content in them are presented solely by the authors, and neither The Times of Israel nor its partners assume any responsibility for them. Please contact us in case of abuse. In case of abuse,
Report this post.

Some people plan their vacations way ahead of time. Like, a year in advance. Like, way before you can even imagine yourself sitting in soemone’s safe room with a rabbit at 4:00 a.m. My L.A. cousin, his wife and their three kids landed in Israel last Wednesday, and it was only as they were standing in line at LAX that someone emailed them a scary message about what’s going on at their “vacation” destination. But by the time you pack suitcases for a family of five, your are just too tired to do anything but get on the plane and go. Unfortunately, five minutes after they walked in from the airport and heard my downplayed summary of “the situation”, saying it will all be over soon and emphasizing there’s probably no chance of us actually getting bombed all the way out here, there goes the siren. The guests were not happy. But I have to say to their credit, they did keep smiling and stayed as calm as can be expected. The next day, after visiting the local pool and eating ice cream, it started feeling like a normal visit again. But too bad for us – we decided to make a stop at the market on the way home. As we’re getting out of the car, with three kids in the back seat, two sirens go off, one right after the other and when you’re outside you can really hear the booms. At that point, we decide to forgoe restocking on fruit and yogurt and just order pizza.  A wake-up call later, at 4:00 a.m. (another siren), is followed by a discussion in pyjamas on our bed: me, the husband, our seven year old (who kicks when she sleeps but evidently feels a need to join us) and my cousin’s wife. She wants to know if the Arabic cries we hear out the window are the Hammas, standing at our doorstep. No, I say, in my new roled as military spokesman, its’ just a recorded “Muezzin” morning prayer from the neighboring Bedouin village, that we hear every morning. Its’ all good, I say in my most reassuring voice. She is not convinced. Later that morning, our cousins repack their suitcases, reroute and leave for a slightly more relaxing vacation in Turkey. As fun as it was, they say, enough is enough.

And I for one, don’t blame them. The fact that this is our country and our home doesn’t mean that our visitors have to stick it out right along with us. The fact that we’re “used to it” doesn’t make this situation normal, it just means us Israelis are crazy for letting it happen again and again, for not insisting that our leaders find a real and viable solution. We’ve just got to make sure this is not our reality forever. Praying for a ceasefire. And then, let’s get to work.

About the Author
Orli is a Texan-born writer who moved to Israel at age 10, is now raising four kids in the Negev, loves swimming and pilates and is trying to get her zen back. She is also one of the leaders of the Southern Chapter of Women Wage Peace.
Comments