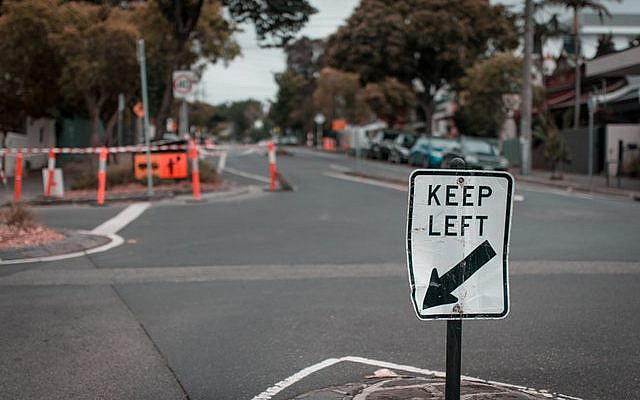 Is This The Right Way? (Free for Use Photo from Pexels - Thanks to Connor Forsyth)

Come on, Kid, come on, Kid Let’s hit him with a left and a right
But how were they to know it was the Kid’s last fight.

“The Kid’s Last Fight” by Bob Merrill was first recorded by Frankie Laine in the early 1950s so he has left the stage and his rights have long expired.

Let me say right off, we have been hearing a lot lately about the struggles for voters’ attention, both here in Israel and in the United Kingdom. As I do not want my readers to be left out, I will try to set you right.

So, if you are feeling left behind, just read right on. And, if you want to pass this message on, I will grant you publication rights.

We would do well to listen to Left, Right, & Centre. This weekly radio program, out of Santa Monica right in the heart of California gives a “civilized yet provocative antidote to the self-contained opinion bubbles that dominate political debate”.

And thinking about centre brings baseball to mind. Centre is used as a short form of centre field. Interestingly, baseball has its own concept of the English language. For everyone else, the past-tense of the verb fly is flew. But in baseball, if a batter hits a ball that is caught by the right fielder, they say the batter flied out to right.

Not that long ago, Jews in Canada were actively discouraged from visiting vacation areas like Victoria Beach. At the height of the Second World War, the Victoria Beach Herald published a front‐page editorial, “Unwanted People.” This proclaimed the exclusive nature of the community and advocated the exclusion of “undesirables”.

The editorial did not need to say who these “unwanted people” were. In 1940s Canada, with antisemitism being a part of Canada’s culture, everyone would have understood.

From the early 1880s to the early 1960s, anti‐Semitism was a part of Canadian society. While it was acceptable to use a Jewish tailor or frequent a Jewish‐owned shop, Jews would not be your neighbours or colleagues at work. There was no way you would meet a Jew at a private sports or social club.

Right down to the present day, not much has changed. In a not unexpected insult to Jewish rights, the government of Quebec has announced plans to allow family gatherings, in a COVID-19 world, for Christmas, but not for Hanukkah. A local rabbi, who should be familiar with Canada’s record of antisemitism, was left rightly bewildered “that the government would prize one faith community over the other.”

He had every right to be angry, a recent study has left no doubt that Canadians are among most active of online right-wing extremists. And a Canadian far-right politician, Travis Patron, the leader of the Canadian Nationalist Party, has gone as far as to call for the removal of Jews from Canada.  “What we need to do, perhaps more than anything, is remove these people, once and for all, from our country.”

With thanks to readers who kept right on to the end of the read. I apologise if you have learnt little about voting here and in the UK. I seem to have written the wrong blog!