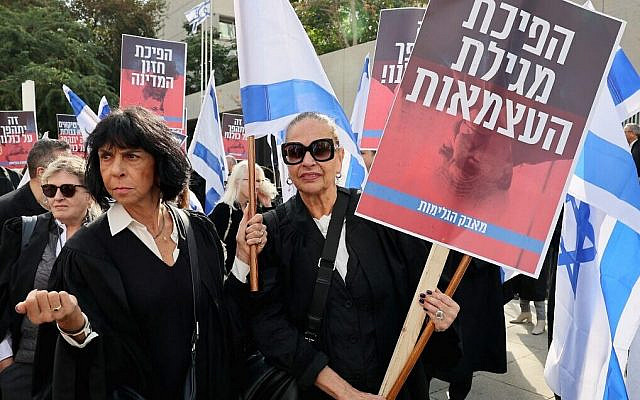 Perhaps the most ill-advised of the reforms to the judicial system that the present government is promoting involves the cancelation of the independent status of Israel’s general counsels — known locally as “the legal advisers” — who play a central role in Israel’s government ministries. The long-held practice is that these dedicated civil servants are professionally beholden to Israel’s attorney general and not to the minister or director general of their ministry. Practically this means that when decisions are made, they represent the law and ensure that politicians and their ministries conform to the statutory guidelines.

These days, the Knesset Judicial Committee is holding hearings about an amendment to paragraph 32A of the Basic Law of the Government. Ostensibly, it is a small revision, but its implications are enormous. Indeed, it is detrimental. The proposed amendments reads like this:

“C – Legal advice given to the prime minister or to any of the government ministers will not bind them and will not change the legal situation for them.”

If this isn’t enough, the next sub-paragraph D removes all doubt that Israel’s legislation will no longer bind government ministers who will essentially be above the law: “The prime minister and all the government ministers are entitled to reject any legal advice and act in contravention of it.”

The historical role of the legal advisers in government ministers is to be the voice for the rule of law in the executive branch. They have been doing this from time immemorial professionally, with dignity and when needed: stubbornly. Perhaps most important of all, they do this in real-time, sitting as gatekeepers in meetings when decisions are being made, making sure that government agencies act in accordance with the law. It is unthinkable that their critical role would be canceled.

It is important to emphasize that in practice, legal advisers do not decide on policy. Rather they set the boundaries for ministerial decision-making. This happens every day, sometimes dozens of times a day. And the thing is, the interventions are almost always in the public interest and in the interest of Israeli citizens. Here are a few examples:

When a government tender calls for proposals on a government contract and a minister would like to lend a hand to an old friend or a political ally (a common phenomenon among ministers of all stripes: right-wing and left-wing) the legal adviser reminds them that there are clear criteria for choosing a winner. Flouting them constitutes a very steep slippery slope in the direction of full-blown corruption. It’s worth mentioning again the importance of the immediacy of the legal advisers’ involvement. They aren’t involved in cleaning up a mess, but rather in preventing it.

If the amendment to the Basic Law of the Government being proposed goes into force, in the rare cases where some intrepid individual or NGO notices that there has been a fundamental flaw in an administrative decision and actually appeals the decision, she faces a very slow-moving legal system. By the time the decision is invalidated, it will have little meaning because the project will have been completed, the appointment made and the minister probably have a different job.

Government ministries typically have a publicity budget to promote public awareness in different contexts. It might be designed to let people know about their disability rights with the National Insurance Institute; it might be to discourage littering on the beach; or about not leaving a child behind in a car. These are important messages. Until now, legal advisers guarded such public funds and made sure that they were used for the public good.

The problem is that sometimes a minister feels a need to publicize himself and sees an opportunity. In such cases, the job of the legal adviser is just to say “No.” That was the situation a while back when Transportation Minister Israel Katz got carried away in a public campaign that gave himself excessive credit for the highways that his ministry had financed. Ultimately, a legal adviser was forced to explain that not only was this not dignified, but also, illegal.

Legal advisers draw up the “conflict of interest” documents for their ministers and senior staff that determine those areas and institutions with which the minister should not be engaged due to present or prior personal involvement. The documents are designed to essentially say: “Sorry but you can’t just go out and hire your sister or your cousin.” Will a legal adviser appointed under the amended law, who receives the position due to personal fealty to the minister, really be able to intervene and forbid involvement in the prohibited areas, where conflicts of interest exist? After all, he knows that his intervention is not binding.

Make no mistake: when legal advisers prevent a minister’s illegal action, it is hardly a comfortable decision. Obviously, it would be easier to go with the flow, keep silent, nod and allow the minister to pursue whatever agenda she wants. But until now, Israel’s legal advisers understood very well when they applied for the position, that their job requires them to ensure that decisions are made professionally, fairly and in accordance with the law of the land.

It is also worth clarifying that making legal advisers a political appointment will not necessarily improve a minister’s ability to promote his vision. There are plenty of tools available at present to that end. But if the amendment passes, for the first time, a minister will be able to promote his personal interests without interference.

Take for example allocation of funds to municipalities. Many government ministries transfer significant funds to local authorities. It is fair to assume that a minister, who needs to face voters in her party’s primaries will be interested in helping an influential mayor from her party who can help her maintain her position of power. As of now, ministerial legal advisers would not allow allocation of resources that is not grounded in specific, transparent criteria. But if the amendment passes, it is fair to assume that a legal adviser (appointed with the understanding that their job is to enable the overseeing minister) will keep their mouth shut and wink when the pork is handed out. Thus, a well-run country becomes a banana republic.

There is yet another danger that exists in the many ministries that over the years acquired authorities to enforce relevant laws — who in practice constitute an extension of the country’s law enforcement system. For instance, the Ministry of Environmental Protection has a Green Police force and a prosecution team of its own. Other ministries are responsible for enforcing, occupational health standards in factories, applying laws against illegal immigrants etc. If the new reform passes, even if he is warned that “it’s a bad idea,” ministers are free to exploit these systems to persecute whoever they want. After all the amendment specifically states that they are “entitled to reject any legal advice and act in contravention of it.” The same minister can determine plea bargain conditions, cancel legal actions unilaterally and generally be unfettered by any normative requirements.

During the recent debate, there have been supporters of the amendment who claim that it would only return Israel back to the good old days before Justice Barak violated the balance among the different branches of government. Really? Some 35 years ago, when I was a clerk in the office of Israel’s attorney general after law school, Meir Shamgar led the court with great competence. It was long before Aaron Barak became the chief justice. Shamgar and Barak enjoyed great mutual respect, but Shamgar surely did not agree with Barak on my issues.

On the independent status of the legal advisers in government ministries, however, there was full consensus. Because the issue has absolutely nothing to do with the authority of the Supreme Court and everything to do with ensuring good governance. Arguments claiming that canceling the independent status of legal advisers simply restore the situation that existed prior to the “constitutional revolution” lack even a teaspoon of empirical truth. It’s demagogy, pure and simple.

The government’s insistence on enacting the “override clause” that would weaken the Supreme Court’s role in ensuring the constitutionality of legislation is a serious mistake, a mistake likely to lead to violations of human rights and empower a tyranny of the majority. But traditionally, the Supreme Court is extremely cautious about striking down legislation for constitutional reasons – and does so on average less than once a year. It seems likely that this frequency will not change, with or without an override clause. By contrast, every day, legal advisers in agencies and in city halls throughout the country cancel thousands of illegal decisions. In other words, if we evaluate the dangerous, proposed legal reform in its entirety, canceling legal advisers’ status is a much more serious blow to the rule of law.

There are those who may want to start considering the answers that the country will need to give to international agencies, who will want to lower Israel’s credit ranking due to the drop in the governance and democratic criteria that play a central role in their grading system. I am more concerned about what we are going to tell our children when they explain to us why their motivation to stay in Israel has dropped, given their aversion to living in a corrupted country where elected officials are not subject to the law or the public interest.