President Joe Biden delivered a September 1, 2022 address in Independence Hall in Philadelphia, PA.  It will forever be known as his Red September speech. It was so shocking and over-the-top, it is being slow walked on mainstream news and social media.

He stood at the lectern and read the jumbo teleprompter in front of a backdrop of blood red lights aimed at a brick wall beside which stood two uniformed Marines. He snarled, shrieked, threatened, raised his closed fists and attacked MAGA, Republicans and former President Trump.
The people in this country had never seen anything like it in American politics. He looked like a cross between Lucifer and Hitler.
Biden’s speech came days after another Pennsylvania speech in which he said that “insurrectionists” (it was a riot, not an insurrection) were in “Parliament” (we have a Congress, not a Parliament and congressional employees opened the doors and let them in) and “killed six policeman” (no policemen died as a direct result of the incident) and that Republicans were “semi-fascists”.
A day or so later, the White  House Press Secretary, Karine Jean-Pierre, dropped a few bombs of her own. She said, “No one enters this country by walking across the southwest border” (4.9 million illegal aliens have crossed the southwest border since Biden took office according to the Federation for Immigration Reform).
The country has made “historic and life-changing economic gains” during President Biden’s term (we are in a recession). Democrats wanted to re-open schools while Trump insisted that they remain closed. (“Trump Wants Schools to Re-open. Americans Worry It’ll Happen Too Fast.” (New York Times, 7/2420)
Biden’s speech was billed as a “Soul of the Nation” address. “MAGA Republicans,” he said, ”  … embrace chaos. They live not in the light of truth but the shadow of lies.”
When Biden was away from public view (he has been away from White House 234 days out of 589 days since he took office) his poll numbers crept up. Now, that Americans have had a chance to look at him in all his scarlet splendor, that may change.
Now that his divisionary and despotic speech has cratered, it’s back to the 1/6 Committee whose one function is to find evidence linking Trump to the protest at the Capitol. The Democrats will keep giving the never-ending Commission transfusions until they find something, anything. Another whistle blower? Trump’s tax returns?
The Congressional midterm elections are November 8. 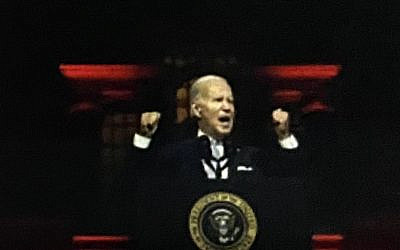 Voters who saw Biden’s narrowed eyes and corpse-like face, do not want to be told to hate their neighbors and are tired of being demonized will go to the polls and vote accordingly.
About the Author
Elaine Rosenberg Miller writes fiction and non-fiction. Her work has appeared in numerous print publications and online sites, domestically and abroad, including JUDISCHE RUNDSCHAU, THE BANGALORE REVIEW, THE FORWARD, THE HUFFINGTON POST and THE JEWISH PRESS. Her books,, FISHING IN THE INTERCOASTAL AND OTHER SHORT STORIES, THE CHINESE JEW. THE TRUST and PALMBEACHTOWN are available on Amazon and Kindle.