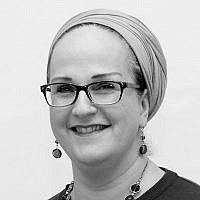 The Blogs
Judy Silkoff
Apply for a Blog
Advertisement
Please note that the posts on The Blogs are contributed by third parties. The opinions, facts and any media content in them are presented solely by the authors, and neither The Times of Israel nor its partners assume any responsibility for them. Please contact us in case of abuse. In case of abuse,
Report this post.
Embed from Getty Images

With school still very much in lockdown mode, and Shavuot fast approaching, my husband thought it would be a good time to study a bit of Megillat Rut with our 10-year-old daughter.

She was reluctant, he tried to coax her a bit. “What do you remember learning about it last year in school?” he asked.

“Dunno – she was really modest, or something?” she replied hesitantly, with a disinterested shrug of the shoulders.

What my daughter was dredging up from the recesses of her brain was, of course, the famous midrash that states Boaz first noticed Rut working in the fields because she was particularly modest, sitting down to glean so that she didn’t have to bend over in an immodest fashion, or hitch up her skirts, as the other women were doing. It’s a midrash that I too learnt many times in school and was often the primary lesson that we were encouraged to take from the sefer.

My daughter’s eye roll and shoulder shrug did worry me though – they reminded me of myself at her age, and of her sisters too – and cynicism when it comes to Torah study is the last thing I want for her. It’s only recently that my own interest in textual learning – having been long relegated to dusty memories of school and Sem – has been revived.  I decided it was time to return to the text and see for myself whether Rut’s modesty was as a central a theme of the story as I remembered – and whether there were other lessons and concepts that my daughter could take away that might pique her interest rather more.

In Rut 2:5, Boaz leaves Beit Lechem to go out to one of his fields, to observe the reapers. He sees Rut gleaning, and asks the man in charge “לְמִ֖י הַנַּעֲרָ֥ה הַזֹּֽאת” – “whose girl is that?”. In his commentary on the pasuk, Rashi asks whether it was usual practice for Boaz to ask questions about the women gleaning in the fields. Rashi concludes that it was Boaz’s curiosity about Rut’s modest and wise behaviour that provoked his question – he noticed firstly, that she was cognisant of the law and only collected the sheaves to which she was halachically entitled – and secondly, that she gleaned while sitting, rather than standing, echoing the midrash in Rut Raba (4:6) that I have already touched upon.

A wider look at the commentaries, however, reveal that Ibn Ezra (an 11th century Spanish commentator) has a completely different, quite prosaic explanation for Boaz’s question. He writes firstly that Boaz may have thought Rut was married – hence his use of the phrase ‘whose girl is that?’ – meaning whose wife. Alternatively, he continues, Boaz may simply have been asking where the young woman had come from – he noticed Rut was dressed differently, in foreign clothes, which furthermore may not have been suitable for the climate.

Even more interestingly, in my perusal of the pesukim describing Rut’s first meeting with Boaz and her subsequent re-telling of the encounter to Naomi, I came across a different midrash in Rut Rabba which implies the complete opposite of the one I began with.

In 2:8, Boaz invites Rut to continue gleaning in his fields, and tells her to “וְכֹ֥ה תִדְבָּקִ֖ין עִם־נַעֲרֹתָֽי”, to stay here with my young women – with the female reapers. However, just a few pesukim later, Rut tells Naomi excitedly that Boaz had told her “כִּ֤י תֵֽצְאִי֙ עִם־נַ֣עֲרוֹתָיו” to go out with his ‘young men’, using the masculine form of the word נַ֣עֲר, youth. The midrash picks up on this: ‘“She really was a Moabitess, considering he said, “you shall stay near my maidens” And she said instead “You shall keep fast by my young men“.’ She did not realise that this was considered, according to the standards of her new residence, to be inappropriate behaviour.

Although these two midrashim appear to be saying the complete opposite of each other, it occurs to me that they aren’t, despite everything, mutually exclusive. Rut was still feeling her way in Jewish society, to be sure – but her innate sense of refinement and modesty of character was evident regardless. And there is a plethora of other lessons to be found in this beautiful text that young women of today can surely relate to and draw inspiration from.

Leadership and Courage: The midrash tells us that when Rut uttered the famous words כִּ֠י אֶל־אֲשֶׁ֨ר תֵּלְכִ֜י אֵלֵ֗ךְ וּבַאֲשֶׁ֤ר תָּלִ֙ינִי֙ אָלִ֔ין עַמֵּ֣ךְ עַמִּ֔י וֵאלֹהַ֖יִךְ אֱלֹהָֽי׃ – “wherever you go, I will go; wherever you lodge, I will lodge; your people shall by my people, and your G-d my G-d”, Naomi took the opportunity to attempt to rebuff her, telling her about the many difficult restrictions she would become bound to by effectively converting to Judaism. But Rut was not swayed – she had recognised the truth and beauty in the religion and would not be returning to the idolatry of Moav. It was her strong sense of conviction that allowed her to forge a very difficult path.

Resilience and Initiative: Rut is a woman who has lost everything; wealth, spouse, a position of respect – and arrived in a foreign country where she and her mother-in-law are objects of curiosity and very likely derision, living in dire poverty, and yet this has not deterred her. Later, when Naomi instructs her to bathe, dress in her finest clothing and lie down at Boaz’s feet in the dark, she is, according to Rashi, concerned that people will mistake her for a prostitute. Rather than balk at the difficult task though, she adapts it, taking her clothes with her and changing into them only when she arrives at the threshing floor.

Personal Potential: Megillat Rut leaves us in no doubt as to the origins of its protagonist. She is repeatedly referred to as a ‘Moabite woman’ – born into a nation that was the sworn enemy of Israel, her first husband had entered into a prohibited marriage with her and had not gone unpunished because of it.  And yet the sefer concludes with a recitation of the direct lineage that leads from Rut to her great-grandson, David Hamelech, King David. Rut is rewarded on her own merits, her ancestry irrelevant. The message could not be clearer, cliched though it might seem – you make your own destiny.

One reason that we read Megillat Rut on Shavuot is because of the mirroring of one woman’s acceptance of Torah and mitzvot with the kabbalat Torah of all of Israel at Har Sinai. It might be too much to hope for to banish all eye rolling completely – but surely, it’s also a genuine opportunity to encourage our daughters to find the beauty in Torah for themselves.

About the Author
Judy Silkoff is a Jewish Community Professional and writer. Director of Operations at the Board of Deputies of British Jews, Judy has a regular column in the Jewish Chronicle newspaper and has contributed to Radio 2's Pause for Thought programme.
Related Topics
Related Posts
Comments