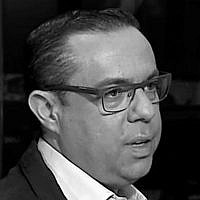 The Blogs
Barak Bouks
Apply for a Blog
Please note that the posts on The Blogs are contributed by third parties. The opinions, facts and any media content in them are presented solely by the authors, and neither The Times of Israel nor its partners assume any responsibility for them. Please contact us in case of abuse. In case of abuse,
Report this post.

Operation Guardian of the Walls began as Hamas opened a massive rocket launch towards the Israeli capital, Jerusalem, followed by the south and the center, culminating with Tel Aviv and the Sharon district. Hamas referred to the riots on Jerusalem’s Temple Mount and in Sheikh Jarrah as its excuse for this calamity. Throughout the operation, Hamas made use of a very sophisticated media system in order to convey its doctrine, both to the international community (global and Arab), and internally to the Israeli population (Arabs and Jews, as well). Although it is a terror movement, it operates formal TV and radio channels (Al-Aqsa), according to the newest technologically innovative new media tools: Twitter, Facebook & Instagram, in order to publish newsflash announcements and short clips.

As the riots in Jerusalem erupted, Al-Aqsa TV began live coverage from the Temple Mount, while relaying messages from formal spokespersons such as Abu-Obeida, who serves as the spokesman of the unified war room for all terror movements in Gaza. Abu Obeida began giving a series of ultimatums to Israel, as the initial one was a vouge proclamation made by Hamas on May 10, according to which Israel was given a few hours to pool out its security forces that day from Jerusalem, “Or else”. His following announcement specified that rockets would be launched towards Jerusalem as the deadline expired. This pattern of ultimatums continued throughout the operation. The Israeli media relayed them while Israelis responded accordingly, and thus, Hamas achieved what it intended — fear and influence! Yet, towards the end of the operation, some of the ultimatums were not carried out and they were solely a media proclamation.

Hamas tweeted on May 12, via its formal Twitter page of Al-Aqsa TV, reports of cries of joy by local Ramallah residents (under the PA’s authority), while challenging Abu-Mazen’s leadership. Yet, on the other hand, its media reported casualty figures as were counted by their health ministry, in order to gain global and Arab support. On May 11 Hamas tweeted a number of 25 dead civilians (among them nine children and one woman). Yet one of the comments to this tweet, noted that three of the casualties were high commanders of the Al-Quds brigades. This comment practically (probably unknowingly), strengthened the IDF’s spokesman’s proclamation that the attacks were aimed primarily at Hamas terrorists…

Hamas also used its media system to appeal to the internal Israeli Arab population. Its live coverage of the demonstrations across the country, as seen in a tweet from May 12 on the local Gazan website “Gaza Now”, made use of the definition of “Historic Palestine” as a title to a picture of 20 cities and villages inside Israel where local Arab populations rioted (culminating in Jaffa & Haifa). 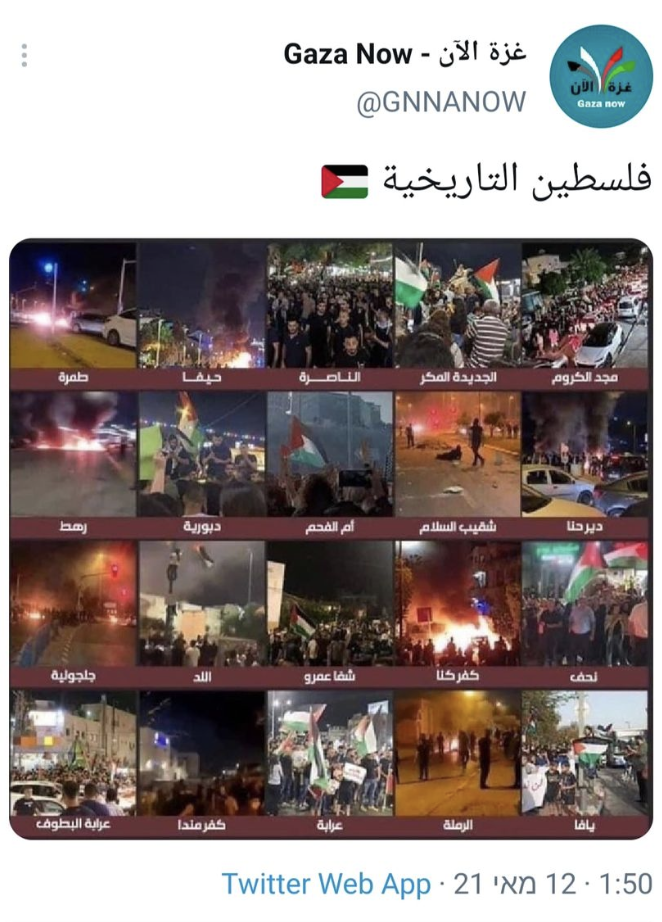 Hamas also quoted (as it does frequently) numerous reports by the Israeli media of rocket attacks, and their consequences in casualties and damages. It relates to any criticism or commentary in the Israeli media that promotes its agenda. On May 12 it presented as early as 5 am the front page of “Maariv” — “The Country is Burning” (this tweet received 110 likes by 9 am). 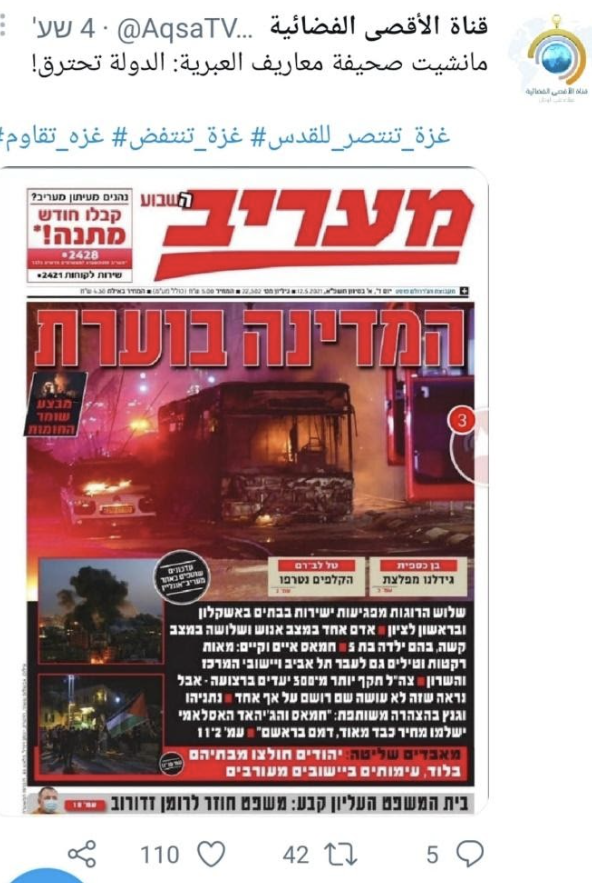 As the discussions over a potential ceasefire advanced, Al-Aqsa TV tweeted on May 20 at 10:45 pm, prior to the formal ceasefire agreement, that “a ceasefire will be official at 2 am” (the early hours of May 21).

If we try to foresee the future, we can only learn from parallel test cases. In July we will commemorate 40 years of the ceasefire agreement between Israel and the PLO in Lebanon: At the beginning of July 1981, a series of Katyusha rockets were launched by the PLO towards the Galilee. They were retaliated by aerial attacks by the Israeli Air Force aimed at PLO bases in Lebanon. It deteriorated into a period of five days in which there were 88 launches of 1,230 Katyusha rockets towards the Galilee, leaving three dead and 59 injured Israelis from Kiryat Shmona in the east to Naharia in the west. Israel retaliated through a series of aerial attacks on Lebanon, killing 100 PLO terrorists and injuring 130 (200 Lebanese citizens were also killed and 800 were injured). Throughout this mutual war, the PLO nearly collapsed, yet the Israeli Air Force could not locate all of the hidden launchers. A ceasefire was agreed upon, yet it served as an accelerator to the formal entrance of Israel to Lebanon in June 1982, Operation Peace for Galilee for the following reasons: Each side interpreted the meaning of the agreement differently. While Israel proclaimed that the PLO would not continue to operate against any Israeli or Jewish targets, the PLO noted this agreement was valid solely on the Israeli-Lebanese border. In addition, PLO leadership decided to accelerate its purchase of weapons and prepare itself for an upcoming war (as there was no clear victory on any side), under UNIFIL’s protection from any Israeli intervention (which was already banned by the ceasefire). It became clearer to the Israeli government, that sooner or later, this infrastructure would have to be terminated.

One can only draw parallels to Operation Guardian of the Walls and future Hamas actions (or media proclamations).

About the Author
Dr. Barak Bouks is a senior researcher at Bar-Ilan University's Europa Institute, and lecturer at the University's Department of Political Studies, School of Communication and International BA Communication Program. His research focuses mainly on terror and religion, the Middle East and security (particularly in Lebanon), and the Arab media, with special concentration on the Middle East.
Related Topics
Related Posts
Comments