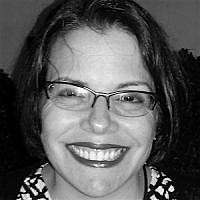 The Blogs
Robyn Fryer Bodzin
Apply for a Blog
Advertisement
Please note that the posts on The Blogs are contributed by third parties. The opinions, facts and any media content in them are presented solely by the authors, and neither The Times of Israel nor its partners assume any responsibility for them. Please contact us in case of abuse. In case of abuse,
Report this post.

This year, we practically skipped Sefer Vayikra, the book of Leviticus. Most Jews did not join together physically as a community for the entire time we should have been reading Vayikra each week in synagogues around the world.  For this third book of the Torah, we were not able to see each other’s faces except through a screen, or give each other hugs, which I miss very much.

I find it ironic that Jews were not permitted to join together in sacred space during the weeks when we learned in the Torah about how to live with centralized sacred space as a focal point. So much of the Sefer is about the Mishkan (Tabernacle) and its accompanying sacred duty  which could only be done in that one particular place.

While we missed Vayikra, we know the holiness described in Vayikra.  We know how to lead holy lives because we inherited a different kind of Judaism where communal gathering is but one focus.

This Shabbat we pivot and begin Sefer Bemidbar with parshat Bemidbar. It is the book of the Wilderness.

The Israelites had a destination. They were going to the Promised Land.  It is a bumpy ride, but they get there every year. This destination was promised to them by God, as it was part of the covenant.

Unlike the Israelites, in COVID-19 time, we don’t actually know where we are going.  We don’t know what to expect on the other side. I am not convinced we are going back to where we were before and of course that makes most of us uncomfortable.

It could be that for some of us, it feels like we have already been wandering aimlessly for 40 years since COVID-19 began impacting daily life here in Toronto.  Days never end when you are isolated with young children at home or when you don’t or can’t work, and can’t currently figure out your purpose or meaning.

If we look to the Israelites as examples, we know the journey will be bumpy, and we also know that most of us will survive along the way. While the journey was sometimes arduous for them, the Israelites make it to their destination.  But us? We are living in undefined terms and most of us know at this point that it is going to be a very long journey.

There is so much that we thought we would need on this journey. While we were caught off guard and unprepared back in March,  many of us have discovered that, actually, we need very little and we can adapt. Manicurist? Hair Stylist? Car? Big box shopping? Continuous gastronomic tour of  vegan restaurants? Apparently I can do without all of those.

God? Meditation? Daily exercise? Check-in texts and conversations with friends and loved ones?  Those I need and value deeply.

One of the lessons of these last two months is that as much as we may be missing and yearning for our pre-coronavirus lives, we actually can live much more simply than we might have thought, before our world turned on its head and the words isolation and quarantine were inserted into every single conversation.

In the wilderness, the midbar, the people did not know what each day would bring. The only thing they knew for sure was that the sun would rise in the morning and would set at night. So too for us.

I doubt we will be physically together again before Sefer Bemidbar ends. So for the next 10 weeks as we read Sefer Bemidbar, we will accompany the Israelites as they go into survival mode. But this year we will follow the weekly adventures in the Torah as examples of how to survive.