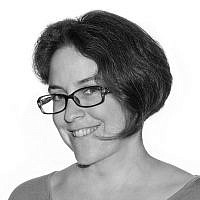 On the occasion of the last Tishrei holiday (salvation is near!) — here’s the last article in my New Year trilogy.
Now that we’ve realized we’re basically celebrating the same holiday over and over again and the myths and customs are different costumes of one another — let’s talk about numbers.

First article: It’s all about Rosh Hashana! (on my personal website)
Second article: All holidays are High (on this blog)

The critical days, not only in Judaism, are the 10th day and the 13th day. In the Book of Esther, Haman casts the lots on the 13th day of the first month, and the date chosen is the 13th of the last month. Jesus’ last supper is on the 13th of Nisan (which was the Thursday before the Seder), and the Iranians go out to the fields for a great national picnic on the 13th day of the New Year. The usual explanation is that they go out of home on the 13th because it’s an unlucky number: the demons may come into the house, so everyone has to escape. In Modern-day anti-Semitic Iranian propaganda, this day is linked to the “Iranian Holocaust” on the 13th of Adar, when the Jews went out and massacred Iranians by the order of Esther and Mordechai. Some take it seriously. 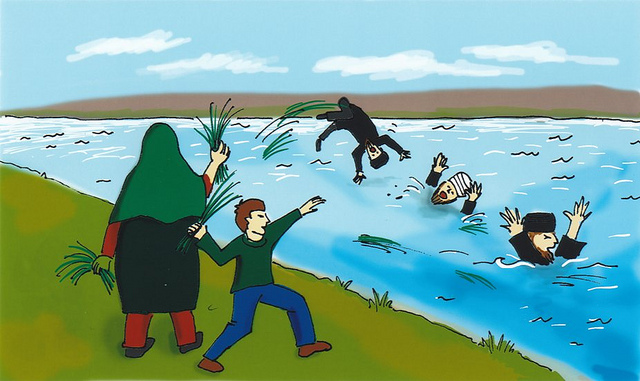 Sizdah Bedar upgraded. Image: Noure Azadi (light of freedom) cc-by.
Usually only the dry sprouts from the holiday table are thrown into the river and wishes are made for the New Year. This image shows the greatest wish of all – a free Iran.

In Judaism, the tenth day is Yom Kippur – the holiest day of the year, when our fortunes for the New Year are finalized. Now that the temple no longer exists, we have to atone for our sins by davening all freaking day, but when the temple did exist, thus tells us the Mishna, the girls would wear white and go to dance in the vinyards (and probably get drunk, because) they would shamelessly make moves on the boys (that’s a check for sexual promiscuity).

In Shiite Islam, the tenth day of the New Year is the Ashura, commemorating the great battle of Karbolla in the year 72 AH (After Hijra), which marks the split between Suni and Shiite Islam, where the great Imam Hossein was killed (great massacre – check! A dead representative of God – check!). On this day Shiites beat themselves with iron chains until they bleed, and the mehadrin also make their little children bleed using a knife (these images are too graphic for my own blog). Others wear costumes and reenact the Ashura. 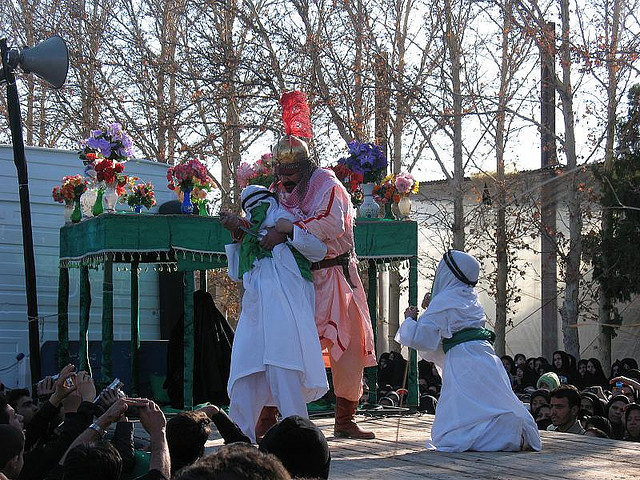 The 10th day of Tishrei in 521 or 522 BCE was also a very important day: the ascension of Darius (Ahasuerus’ father) to the throne. The details are in the link, so let’s just complete the checklist: It happens on the 10th day of Bagayadi – which is equal to Tishrei (check!), Darius and 6 of his friends, killed the impostor king (check!). A girl who married the king plays a crucial role in the story (she slept with the impostor king, which she shouldn’t have, so that’s a check for sexual promiscuity, just like Esther and the gentile king). Herodotus says the impostor was a Mede (from Media, and pervious empire), which put the Persian sovereignty in danger (check!). And the great massacre (check!) of all the Medes that followed, was commemorated by a holiday (check!) that was celebrated until at least the 4th century CE.

We don’t know how many of these events are real, and if they are – to what extent the details (especially the date) have been changed in order to fit the paradigm of the martyred God. The holidays are now distinct – in each one we eat something different in order to remember that they tried to kill us and we won – but the underlying paradigm is one.

I must admit all this occupation with numbers and equinox months made me a bit too sensitive, and there are two recent calamities that I can’t explain without resorting to conspiracy theories, astrology or God: September 11th, 2001 and the 11th of Tishrei this year.

This trilogy of articles brought only the ancient Near Eastern tip of the iceberg, but apparently this paradigm appears in other cultures throughout the globe. Exploiting the primeval fear of the imminent destruction of the world, while providing an organized and controlled opportunity to break social rules, seems to be an effective tool for controlling people around the world.

Thamar E. Gindin is a faculty member in Shalem College in Jerusalem, researcher at the Ezri Center for Iran and Persian Gulf research in Haifa University, lecturer and author of The Good, the Bad and the World, a Journey to Pre-Islamic Iran (Hebrew) and The Book of Esther, Unmasked (Hebrew, English and Persian). This article is based on the 9th chapter of The Book of Esther, Unmasked.

About the Author
Thamar E. Gindin holds a Ph.D. in Iranian Linguistics. She is a lecturer, teacher and researcher, and author of The good, the Bad and the World, a Journey to Pre-Islamic Iran (Hebrew), and The Book of Esther Unmasked (Hebrew, soon English and Persian). Photo: Tom Langford
Related Topics
Related Posts
Thamar E. Gindin
Comments