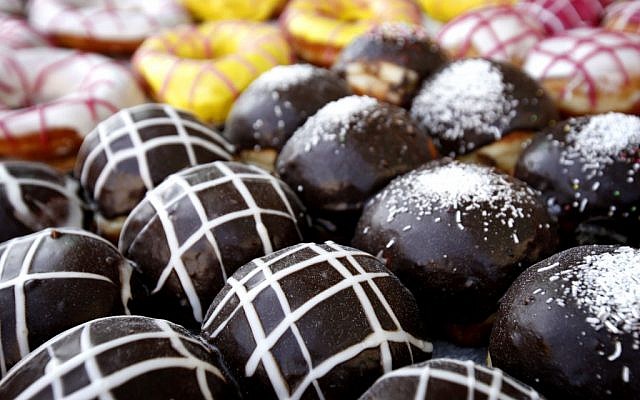 Hanukkah is the holiday of donuts here in Israel. Yes, we traditionalists also eat potato latkes, but donuts are the national food of the holiday, and everyone knows it. School Hanukkah parties always end with the distribution of classic Israeli jelly filled donuts, and every family in this country probably has at least one photograph of a child with a powdered sugar dotted nose. Walk into a mall during Hanukkah, and you will see (and smell!) trays upon trays of artfully decorated donuts of all different types and flavors beckoning to you from the entrance of the bakeries. Some bakeries sell the filling separate from the donuts, and you can inject your own donut with a cream or custard filled syringe. Every year, it seems that there are more and more flavors to choose from. In recent years, even American style donuts have made a welcome appearance. You can’t be in Israel and experience Hanukkah without encountering donuts.

Any child in Israel can tell you that we eat donuts on Hanukkah to commemorate the ancient miracle of the small, sealed jug of oil that was used to light the menorah in the re-dedication of our Holy Temple in Jerusalem. This jug of oil should have only been enough for the flames to last for one day, and yet the menorah burned brightly for 8 full days. To remember and celebrate this miracle, we eat foods that are fried in oil.

Of all the Jewish customs that a political official could have messed with, Israeli Health Minister Yaakov Litzman decided to decry donuts. It seems that nothing is sacred anymore. Health Minister Litzman called on the Israeli public not to eat donuts during Hanukkah because they are full of oil. He said that we need to find alternatives to donuts, since they don’t line up with the healthy nutritional values that we want to promote. As if his call to arms against donuts will motivate us to eat some fried kale instead.

The health minister urging the Israeli public to stay away from donuts this Hanukkah bothers me on several different levels. A government official telling people what they can and can’t or should and shouldn’t eat is not even close to being the answer to Israel’s obesity problem. In fact, this approach will most likely cause a counterproductive backlash. I don’t think that negative messages or negative solutions will produce any positive results. I also think it cheapens the Ministry of Health by trivializing something which is serious.

Methods to promote better nutrition need to be intelligent. Telling people not to eat donuts on Hanukkah, especially when you know they will eat them anyway, is not my idea of intelligent.

I am not sure that Health Minister Litzman’s other proposals to improve our nation’s health are any more promising, though they are methods that are currently being used in other countries. Banning food deemed unhealthy from schools and using a “traffic light” labeling system on packaged food with red, yellow, and green color coding to indicate the degree to which food is considered healthy or unhealthy (based on the amount of sugar, salt, and fats) are definitely more on-track ideas than telling people not to eat donuts, but the evidence so far isn’t indicating that these methods are all that effective in reducing obesity.

I understand the school of thought that any action seems better than no action, but is it? Budgets have the potential to be wasted on programs to reduce obesity that aren’t giving returns instead of being spent in other areas of health which desperately need funding, like eating disorder treatment for example. I seriously hope that Health Minister Litzman reads the same evidence that I do and is looking at current research before sinking money into public health programs to reduce obesity that have no proven efficacy, because the evidence that I have seen is strongly against focusing solely on nutrition without addressing physical activity and other social (and possibly biological) issues. In addition, I am concerned that getting people more obsessed and rigid about food will create a whole different set of problems, and it won’t solve the one at hand.

I don’t think that we can make any significant strides in reducing the rates of obesity without engaging the public in a way that motivates them to change their behaviors. Any methods which seem punitive, induce guilt, promote shame, or don’t address the issue of obesity in a sensitive manner are doomed for failure.

I wouldn’t advocate eating donuts all that often, but that’s the point of a holiday treat–it’s occasional, and it’s meant to be savored and enjoyed. Donuts are our Hanukkah thing here in Israel, and Israeli bakeries continue to step up their game year after year and create culinary masterpieces that bring smiles to the faces and stomachs of kids and adults alike.

The health ministry should be focused on developing and implementing evidence based programs to reduce and treat obesity and make our country healthier. Making frivolous sweeping statements about donuts isn’t at all what I had in mind.

About the Author
Judy Krasna is an event planner in Israel. She is also the mother of four children, including a daughter with an eating disorder, and is an eating disorders parent advocate. She offers free support and advice to parents of kids with eating disorders. Judy is an active member of the Academy for Eating Disorders and F.E.A.S.T, and advocates both in Israel and globally. She can be reached at judy@feast-ed.org.
Comments