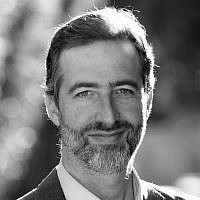 The Blogs
Saul Singer
Apply for a Blog
Advertisement
Please note that the posts on The Blogs are contributed by third parties. The opinions, facts and any media content in them are presented solely by the authors, and neither The Times of Israel nor its partners assume any responsibility for them. Please contact us in case of abuse. In case of abuse,
Report this post.

We first met 30 years ago when, as Israel’s ambassador to the United Nations, you spoke movingly at the shloshim for my brother Alex z”l. From your heartfelt words then, I know how much you care about the strength of this country, morally and every other way.

Just now at AIPAC, you spoke eloquently about how much we have to be proud of on Israel’s 70th birthday. For our size, we have the most largest and most vibrant startup sector in the world. We are proud not just of this economic success, but that so many startups are solving real problems for millions of people around the world.

Innovating for good is part of the Israeli spirit. As one of our top entrepreneurs put it, “you’re not just trading in goods or a finance person. You are doing something for humanity. You feel like a farmer of high tech.” Startups are “the new pioneering … the Zionist narrative is about creating things.”

For two millennia, we have dreamed of a Jewish state. Theodore Herzl painted a utopian picture of a country that would dazzle the world with its science, technology, art, and culture. Israel, of course, is hardly a utopia. It could not be otherwise. As Amos Oz put it, “The only way to keep a dream perfect and unsullied is never to live it out.”

But we can only imagine Herzl’s amazement if he would have seen the leader of the largest democracy on earth, Prime Minister Narendra Modi of India, visiting Israel and then hosting you in India with a welcome befitting a great power of strategic importance for his country.

And it is not just India. China and many other European, Asian, South American, and African countries have been reaching out to Israel to partner on innovation. Senior business and governmental delegations have been arriving in a steady stream to engage with Israel’s startup scene. Israeli innovations are already making a difference throughout the developing world, and these new ties will help us do more.

Yet it is precisely all this good that Israel is doing that makes a moral failure more painful. At this writing your government – our government – is issuing expulsion papers to some 35,000 illegal immigrants, mainly from African countries.

The arguments for doing this are not trivial. Many of the migrants do not fit the definition of refugees fleeing a “well-founded fear of persecution.” Israel, like any other country, is not obligated to absorb “economic” migrants. South Tel Aviv is unfairly bearing the main burden of a migrant community living under a legal cloud.

Perhaps the strongest argument has been that, as much as we would like to help these desperate people, if we do it will just attract more illegal immigrants. A line must be drawn somewhere. But that’s exactly the point. The line was drawn when Israel closed the porous border with Egypt and the flow of immigrants stopped. The people here now came in before the border fence was built.

Many Israelis support the government’s move to expel these migrants. At the same time, tens of thousands have marched in the streets of Jerusalem and Tel Aviv to oppose their expulsion. The question is a fair one: why should Israel go beyond its international obligations and condone the violation of its immigration laws?

The answer gets to the heart of what it means to be a Jewish state. The most common definition is a state with a Jewish majority that is a refuge for the Jewish people. But to me, this definition is unsatisfying. We didn’t come all this way as a people just to survive. Survival is not a purpose, it is a prerequisite to a purpose.

The Jewish purpose is to make the world more ethical. According to the great Jewish thinker Eliezer Berkovits, this mission cannot be just talk. It requires “acting in history.” This is what Jewish peoplehood is for: to act in history as a people, not just as individuals. And the ultimate agent of action of the Jewish people is the Jewish state.

The idea that being a Jewish state requires holding ourselves to a higher standard is not new. It underlies the concept of “purity of arms.” We do not always live up to this standard but it has led us to knowingly sacrifice the lives of our soldiers to minimize civilian casualties on the other side. No other military has more systematically held itself to this standard. Why do Israeli military leaders back this policy? Because they know that our military strength depends on our moral strength.

So too in this case. We have every right to act like other countries that would have no qualms expelling illegal immigrants. But should we? Should we expel people who do not fit the international definition of refugees, but who walked for weeks or months and risked their lives to reach Israel and seek a better life? We should not. Not everything that is legal is moral, and if we are immoral we forsake our mission as a people and weaken ourselves.

In 1977, Menachem Begin’s first act as prime minister was to grant Israeli citizenship to Vietnamese boat people who were rescued by an Israeli freighter. These refugees were reportedly refused entrance by Japan, Taiwan, and Hong Kong.

Begin explained his decision, “We never have forgotten the boat with 900 Jews [the St. Louis], having left Germany in the last weeks before the Second World War… traveling from harbor to harbor, from country to country, crying out for refuge. They were refused. Therefore, it was natural to give those people a haven in the land of Israel.” Perhaps Begin also had his spiritual leader, Ze’ev Jabotinsky, in mind. Jabotinsky deeply believed that a Jewish state must treat “all people as free and equal” and “a king who is equal among kings.“

The daughter of one of these refugees, Vaan Nguyen, is now a poet and actress living in Tel Aviv. She was born in Israel and writes and performs in Hebrew.

We are a strong, wealthy, innovative country of 8.5 million people. Surely, we can absorb a small number of people in a way that does not overly burden one part of the country and will allow them to become productive citizens. If you made the call, there would be no shortage of host families willing to lend a hand. We are a country of immigrants, so we know that immigrants and their children are often the proudest Israelis.

Doing the right thing is not always easy but Israel does not shy away from hard things. Israel has sent IDF rescue units across the world, from Haiti to Nepal, to help disasters victims. This time, we don’t have to move mountains to help those in need. They are right here, strangers among us.

I know that you are conscious of Israel’s place in Jewish and world history. You still have the opportunity to use Israeli ingenuity to give us another reason to celebrate on Independence Day. I wish for all of us that you can channel your inner Begin and Jabotinsky and let these people stay and start a new life in Israel.

Saul Singer is co-author of Start-Up Nation: The Story of Israel’s Economic Miracle.