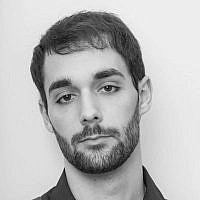 The Blogs
Giacomo Comincini
Secretary General, Foreign Friends of Catalonia
Apply for a Blog
Advertisement
Please note that the posts on The Blogs are contributed by third parties. The opinions, facts and any media content in them are presented solely by the authors, and neither The Times of Israel nor its partners assume any responsibility for them. Please contact us in case of abuse. In case of abuse,
Report this post.

The starting point for any political proposal should be a ruthlessly realistic analysis of the forces at play. Since material progress is built on contradictions and molted into the very sand of the arena in which it occurs, it is essential to look at reality as it is, moving away from idealism for a moment, id est, observing the actors and their prospects for action in a historicistic key. Please do not look at this intellectual exercise as an abdication from the duty of criticism and of taking a stand. Especially given that it is so hateful that the inability to empathise with the oppressed or to lean towards the oppressor is often masked behind equidistance. Allow me, instead, to sketch a picture that appears to me, in 2022, as honest as possible.

My thesis is that, contrary to what we might be led to believe, the one state solution is nowadays the most realistic way out of the territorial problem of Palaestina.

Let’s go into details. On the one hand, the State of Israel has all the institutional scaffolding to take on a plurinational transformation, on the other it is precisely the insufficient numerical and social strength of the Arab population in Israel that makes full equality of opportunities and of lifestyle still unrealised. In other words, Israel is not yet the rule of law country its Constitution promises to be because there is literal, demographical shortage of people willing to vote in favour of such a project (Arabs, Christians, secular and left-wing segments).

The Israeli conservative movement, especially in its religious variants, dominates politics – even when in opposition, considering the intact strength opinion polls keep attributing to it – because it is capable of mastering the narrative of otherness (“we” against “them”) and making it dominant among some key constituencies of Israeli societies. Assuming the rupture of this block of power as unlikely within the current correlation of forces, it is plausible that a structural upheaval in Israel can only take place in the face of a profound change in the balance of power in Israeli society. And that change, in democracy, often occurs through demographic shifts.

Although witnessing the birth of a different Israel does not appear to be imminent, the revitalisation of the Palestinian state remains an even more unrealistic project. The West Bank’s system of self-government – very limited and inefficient – suffers from the defects of clientelism and corruption, even if it undeniably gives way to successful experiments of welfare policies and involvement of minorities in political leadership (through Fatah). What also needs to be said is that the Palestinian state barely controls 40 percent of the West Bank territory, which is mostly in the hands of Israeli colonization through the Area C institution. Gaza, since the 2006 election, remains a corpus separatum that is difficult to reintegrate within the Palestinian territorial order, so I will not be able to involve it in my reasoning.

As I just mentioned, Israel already controls the majority of the West Bank. The one-state solution is already in the making, put into practice because of the Israeli colonization push and the fragility of the counterpart. The process is execrable, but the result can indeed be beneficial to the plurinational cause. Undoubtedly, the definitive annexation of the West Bank – which seems to be coveted by the madmen of the right-wing and within reach in the medium term – would have the unintended consequence of increasing the revolutionary social cohort, that is to say the young, Arab (and in many cases secular) population. These people would find themselves in a position to exercise the rights conferred by the newly acquired Israeli citizenship, primarily the vote. And guess what kind of political-institutional project they would vote for. In 2015 (with the Joint List exploit) and 2021 (with Ra’am becoming the kingmaker) we witnessed the strength of the Arab lists in Israel and their ability to be decisive in the current political framework of the Jewish state. Just imagine what could be achieved with the introduction of 2.5 million new voters within the political arena, inside a polity that makes the choice to be the only territorial entity in Palaestina, and therefore accepts to be ethnically and religiously diverse. As I often put it when debating with my dear friend Yahia Almimi, political theorist and author, “Fatah would become the first Israeli party”.

The relative strength of Israeli institutions and the weakness of the Palestinian alternative suggest that only one of these states has all the strength needed to reform in a plurinational sense. The annexation, which is already underway, would facilitate a change in the balance of power: the left and the secular forces could aspire to build a political hegemony aimed at a substantial reform of the state. A state with no ethnic character, no national religion and no essentialist exclusivity can only arise through a South African-style struggle for an end to segregation and for full equality, led by the progressive forces. Let me elaborate on the South Africa simile. Working on the two-state solution means placing one’s bet on the chances of the National Party regime and the Bantustans coexisting peacefully. Working on the one-state solution, instead, means preparing the political and demographic conditions for a Palaestina ANC to arise.

It is self-evident that such a state would cease to bear a quintessentially Jewish character and would become a civic nation. In such a context, names, flags, symbols and state policies on language and culture ought to be reviewed. By the way, my continued reference to the possible single state for Jews and Arabs as “Palaestina” (both name and adjective) will have been noted. I am inclined to use the Latin name of the region with a cautiously provisional character, being aware that, if it is a question of imagining a political entity for the area, even the name of the state has to be invented. Hence the title of this piece, which is nothing more than a quote from Genesis. It comes from chapter 11, when humanity was already created, but languages ​​had not yet fragmented its unity. “Come, let us build ourselves a city, with a tower that reaches to the heavens, so that we may make a name for ourselves; otherwise we will be scattered over the face of the whole earth.” Hence the name of Palaestina too, which constitutes a reference to the land, not the aspiring dominant ethnicity.

As can be taken for granted, so many traits of the state should be negotiated on the grounds of plurinationality, plurilingualism and secularism – and even in this South Africa, with its flag and its concept of a Rainbow Nation, with 11 recognized languages, has a lot to teach. This mission should not scare anyone, given that nation-building is a process that can be referred to by every human society and always involves mechanisms of negotiation and socio-cultural confrontation. Identity is a historicistic object, therefore artificial and changeable: for this reason, let us not consider it as something insincere.
Here, as is evident, the analysis stops and the suggestion takes over. I think that the most useful service that a friend of progress can provide is to imagine proposals to make the accommodation of the populations of Palaestina in a single political entity more likely.

My modest proposal is that a future plurinational state choose Esperanto for itself as the polity’s lingua franca. Experience (from republican Turkey to red China) tells us that the best way to break with the past – and, in our case, with sectarian and ethnic sectarianism – is to cut ties with the language used by the ancestors (or to radically reshape it). I do not suggest eliminating Hebrew and Arabic, of course. Instead, by politicizing Esperanto, that is, by making this language the tool for political, social and cultural claims, we would allow Hebrew and Arabic to survive as tools of beauty, and not of conflict between communities. Moreover, the history of Esperanto is undeniably linked to that of the Jewish diaspora as much as to the reform movements of the Middle Eastern world.

Thanks to its simplicity and similarity to other languages, Esperanto offers itself as a versatile tool and an effective bridge between cultures. Not being the language of any national group, it seems fit to become the language of a state that does not distinguish between peoples. It would be a unique, unprecedented case in history. A clean slate, a restart from scratch. A source of pride, a medal of merit, a cultural experiment of sure daring. Isn’t that what we all wish for this land?

About the Author
Giacomo Comincini, 22, is a student of East Asian Studies (MA) at Collegio Ghislieri and IUSS Pavia (Italy). He is currently serving as Secretary General of the transnational advocacy group 'Foreign Friends of Catalonia'. He identifies himself as progressive and Raumist.
Related Topics
Related Posts
Comments