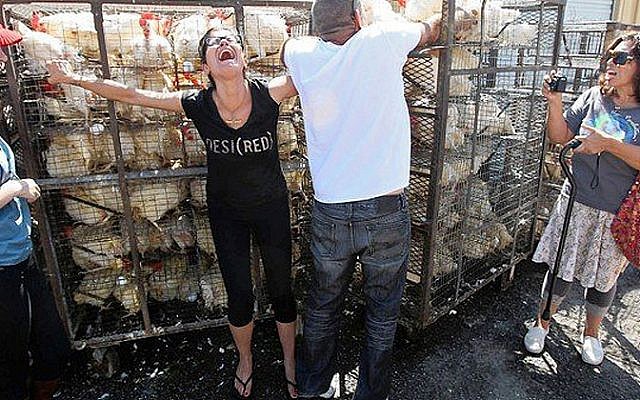 Chickens being killed for a so called "good cause."

First off all, just so we’re on the same page, let’s say the definition of Kapparot is, “The tradition of atoning for your sins on Yom Kippur by swinging a chicken above your head while it’s still alive.”

Why do I bring this up?

Yesterday I was walking through one of the religious neighborhoods in Brooklyn.

While I was walking, I happened to pass by people who were doing the Kapparot ritual.

I was seriously disgusted and traumatized.

Even though I wasn’t brave enough to see exactly what they were doing to the poor chickens, it was impossible to ignore the horror of what the these animals had been through.

These so called “religious” individuals were stuffing the chickens into extremely small cages.

The chickens were squawking and the men were kicking the cages to shut them up.

You could tell from the looks on the chickens faces that they were suffering badly.

But the problem is, these chickens are too vulnerable and unimportant to be saved.

I am so disgusted with these individuals who are able to abuse animals.

I simple cannot relate to it.

So many questions pass through my mind watching these atrocities.

I really want to ask, “Do you honestly not feel deep pain when you are putting those chickens in such small cages?”

“What about when you are swinging them above your head like they were yo-yo’s?”

“It doesn’t bother you at all when you are kicking and slaughtering them?”

“You’re doing all this to those poor, innocent chickens who did no harm to you so you can allegedly have your sins or whatnot taken away from you?”

But of course, these “devoutly religious” individuals are going to come up with stupid excuses such as, “Well, it says in this religious book or in that religious book that you’re supposed to do this.”

Or they’ll probably say something like, “It’s part of Yom Kippur’s rituals.”

Well, here’s my answer to y’all, “Don’t hand me that baloney!”

In this or that religious book it says a lot of things.

These books say you’re not supposed to gossip.

They say you’re not even supposed to wear wool with linen.

(But everybody wears that no matter what!)

Don’t go around saying it’s because of Yom Kippur.

You are torturing innocent creatures.

I repeat, you are torturing innocent creatures.

If you insist on looking at it from a religious perspective, then you must know that all animals were created by God.

You wanna be a good Jew on Yom Kippur?

How about going to all of the people that you hurt and telling them how sorry you are?

Of course, that takes much more effort than torturing chickens, right?

Maybe being a good person means feeding a hungry animal.

Maybe it means getting your head out of of religious texts and understanding that this is 2018.

Again, don’t tell me about books saying that’s the way it should be.

If you do I will come right up to you and ask, “Did you ever lie?”

“Have you ever gossiped?”

“Hurt yourself or others, etc. etc.?”

The answer will probably be “Yes” to at least some of the above.

However, for some reason, you are obviously very selective on what you choose to follow.

So, for anybody who performs the Kapparot ritual, you really need to do tshuva and see a therapist because something is definitely wrong with you.

You’re really bent if you can just torture innocent animals to death instead of stepping up to protect them.

I say the real definition of Kapparot is, “Giving a religious excuse to animal cruelty.”

I can assure you that God is unhappy when you torture his creations.