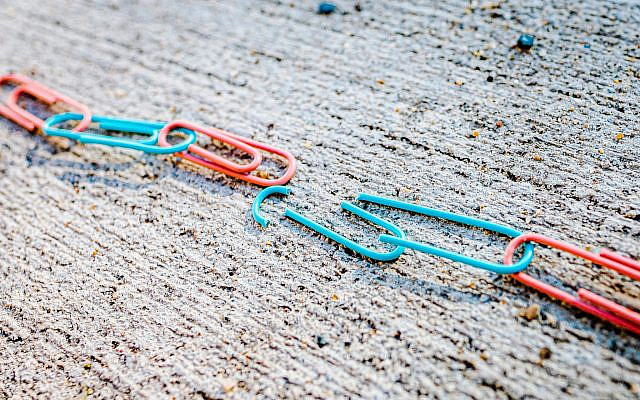 Unchained. Peers are urging colleagues to back a domestic abuse bill which would free women from gets. (Photo by Jackson Simmer on Unsplash via Jewish News)

More than a century ago Emmeline Pankhurst formed the Women’s Social and Political Union. Women got the vote in 1928 as a result of her leadership of the Suffragettes, but the battle for equality is still not won.

For their part the government want to see more women in senior positions in commercial companies. Our spiritual authorities are still trying to solve the problem of husbands who won’t give their wives get.

A lack of equality, though, is ingrained in British history and, for instance,  attaches to one of our finest customs. What could be more admirable than the Queen sending a personal card of congratulation to any married couple who have achieved a Diamond Wedding? A card to be treasured.

Who is it sent to, though? Logically, it should go to Abraham and Sarah Cohen. In fact, it is addressed to Mr. & Mrs. Abraham Cohen. Sarah has never been considered equal in this regard.. Of course, if anybody actually thought about this for a moment, the rule could be changed, but inequality is too often taken for granted unless somebody makes an enormous row.

Let’s move on to the approximately 250 British women who want a divorce, a get, but their husbands won’t give them one. The argument is that only the husband can give a divorce and if he doesn’t, then the marriage remains intact. The children of any second marriage, without a get from the first, would be illegitimate.

Can the law be changed? The Orthodox will tell you they believe it can’t, but in this instance this is factually inaccurate. Up to 1,000 years ago, if a husband gave the wife a get, she had to accept it. Rabbi Gershom ben Judah in Germany held that she didn’t, and Rashi said of Rabbi Gershom that every rabbi was a student of that famous Talmudic scholar. His ruling was accepted. Today – as for the last 1,000 years – if a Jewish wife wants to reject a get, she can do so – anywhere in the world. Rabbi Gershom had changed the law. And there are husbands who find their wives equally as obdurate as the men. and reject a get.

In 1910 the Chief Rabbi, Hermann Adler, was cross examined on the Jewish law of divorce by the government’s Divorce Commission. He died the following year but he insisted over a long interrogation that only the husband can give a get.

The position is surely also complicated by an even older ruling; third century; Dina de malchuta Dina – the law of the land where you live, is to be the law of the Jews  as well.

Now, for example, British law excludes shechita from the necessity of stunning the animal before slaughter. But it is specifically excluded and it has been reiterated in the House of Commons on a number of occasions. It doesn’t alter Dina de malchuta dina.

The Beth Din can insist on a get in a number of cases. Among them are if the husband doesn’t provide for the wife, if he beats her and if he has a serious illness. Now the Domestic Abuse Act 2015 and the new one coming into force in April 2022 can insist on a get. It can be judged a criminal act, punishable by up to five years in prison, not to give one if a civil divorce has been granted.

The Beth Din would have to consider, however, the law that a get has to be given voluntarily by the husband to be valid. One way of ensuring this is by a pre-nuptial agreement which both parties sign before marriage and promises to give and receive a get if the situation arises.

The problem here is who wants to deal with potential divorce when they’re in love and getting married. The solution would be if it was accepted as a pure formality, but that’s a difficult attitude to expect.

It is possible to penalise a husband who won’t give a get by effectively throwing him out of the community. Where the Beth Din suspects his motives, such pressure is sometimes brought to bear, but the pressure can be resisted.

The most dangerous aspect of this whole situation is that the children of a second marriage might be made illegitimate because the Charedi consider the get invalid – where it was held not be voluntary – and the Chief Rabbi considers it acceptable.  They may be a long time at the drawing board.