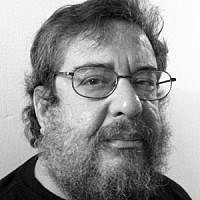 The Blogs
Carl Hoffman
Apply for a Blog
Advertisement
Please note that the posts on The Blogs are contributed by third parties. The opinions, facts and any media content in them are presented solely by the authors, and neither The Times of Israel nor its partners assume any responsibility for them. Please contact us in case of abuse. In case of abuse,
Report this post.

Okay people, here’s the situation. Egypt is in turmoil, and they’re jailing journalists. Lebanon is a basket case, with everyone busy killing everyone else. Syria is in the midst of an apocalyptic civil war. Iraq is crumbling. Meanwhile, an army of sociopathic killer zombies—variously referred to as ISIS, ISIL, and now simply as the Islamic State—is trying to take over both Syria (which is having a civil war) and Iraq (which is crumbling). And Iran is, as always, Iran.

What’s the point of even mentioning Turkey? Their president, who older readers might notice bears a striking resemblance to former US TV host Ed Sullivan, is at any moment either violently cracking down on peaceful demonstrations or vilifying Israel, often simultaneously, conclusively refuting the theory that men are unable to multitask.

And as if all that weren’t enough, rockets are raining down on us from Gaza, and we’ve had a couple of really horrific weeks on the West Bank, with more likely to follow. Let’s face it, people: we live in a crappy neighborhood, and it’s time to move to the suburbs.

Stated simply, I am talking about ripping Israel bodily out of the Levant, towing it westward through the Mediterranean, out through the Strait of Gibraltar, down the coast of Africa, round the Cape of Good Hope (aptly named for this endeavor), eastward across the Indian Ocean, and then out into the vast Pacific, until we come to rest in the Northern Mariana Islands, just a little to the east of Saipan. Two good-sized tugboats, one with a rope attached to Haifa, the other with one tied up at Ashdod, should do the trick.

Why the Northern Marianas?  Well, there’s the soothing tropical climate, for one thing. Gentle sea breezes, clear blue water, and summer all year round. Also, like Puerto Rico, the Northern Marianas have U.S. Commonwealth Status. We could pop over to Saipan, Tinian, or Rota anytime we get a craving for KFC, Taco Bell, or Krispy Kreme Donuts.

But the most important advantage of anchoring the State of Israel near the Northern Mariana Islands is that nothing ever happens there. Trust me on this; I’ve been to that charming archipelago. Nothing ever happens there. Absolutely, positively nothing. Nada. Nil. Nichts. Niente. Bupkes. Not a single goddamned thing of note has occurred there since World War Two passed through the place 70 years ago. Nothing. Really.

Towing the country away from the Middle East and over to Micronesia should not pose much of a problem. No packing, no movers, no schlepping. No buying plane tickets, no fiddle-farting around with travel agents or online bookings. No deciding what to take, no deciding what to leave behind. No tearful farewells, no sorrowful sighs, nobody singing “Anatevka, Anatevka,” as the loaded wagons go rolling off into the sunset. No wagons. No muss, no fuss. Everybody will simply go about their business and get on with their normal lives, not even needing to worry about becoming seasick as our country gently sails through calm tropical seas, passing mile after mile of sleepy tropical coasts.

That’s not to say that the odd, unexpected glitch or snafu won’t crop up. Some of our dear countrymen from South Africa, for example, might try to jump off and swim “home” as we round toward Cape Town on our way to the Indian Ocean. Well…whatever.

Nor have I figured out yet exactly how we’ll detach Gaza before we go, or places in the West Bank like Ramallah and Jenin that we also might not want to bring along with us. But, hey, do I really have to think of everything here? Work with me, people.

About the only thing left up in the air is whether we want carry on calling ourselves the State of Israel after we are settled in the waters east of Saipan, or seek inspiration from our new locale. Fortunately for all of us, I’m already thinking about this. I propose we adopt the name ISIP—The Israelite State in the Pacific.

I am, however, open to other suggestions.