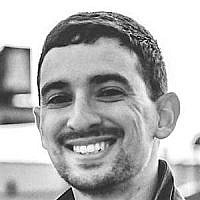 The Blogs
Jason Horowitz
Apply for a Blog
Advertisement
Please note that the posts on The Blogs are contributed by third parties. The opinions, facts and any media content in them are presented solely by the authors, and neither The Times of Israel nor its partners assume any responsibility for them. Please contact us in case of abuse. In case of abuse,
Report this post.

On a recent trip to Israel, I met with a friend who I had not seen in nearly a year.

Naftali (not his real name) is smart, passionate, and thoughtful, especially when it comes to Israel. He identifies to the left of the Israeli political spectrum, perhaps even bordering on the far left. During our conversation, we lamented at how the conversation surrounding Israel today has become dominated by talking points, both in the mainstream and on the fringes. Talking points, in this case, are factually based statements without proper context. Later, while discussing occupation, Naftali started spouting off “facts” about Israel’s treatment of the Palestinians. When I pushed back, telling him that what he was saying to me was basically left-wing talking points which didn’t reflect the complexity of the conflict, he told me that what he was saying was the “truth”.

Talking with Naftali only confirmed for me that both the right and left rely on one-sided talking points to justify their views on Israel, yet neither side often recognizes the narrowness of their perspectives.

If we really want to make change in Israel, we need to first change the way we talk about Israel. To do this, we need to move past the talking points.

Below I overview six of the most common talking points used by the left and right and deconstruct why each one, when used without context, is detrimental to how we talk about and understand Israel today. They are in no particular order.

Israel is the only democracy in the Middle East

Ignoring the fact that both Lebanon and Turkey are considered democracies (for now), stating that Israel is a democracy is precarious. Why is this? Within the Green Line, Israel is absolutely a democracy and provides its citizens with equal rights within the law. This is reinforced by Israel’s Declaration of Independence, where it states that the country “will ensure complete equality of social and political rights to all its inhabitants irrespective of religion, race or sex; it will guarantee freedom of religion, conscience, language, education and culture”. Additionally, Freedom House gives Israel a score of 80/100 and ranks it as a “free” country (source).

For many people though, when we speak about Israel, we also include the West Bank. This makes the conversation trickier. There are many people who struggle to see Israel as a fully functioning democracy and, if we are being honest with ourselves, they have some fair criticisms. It is true that Israel has never officially annexed the West Bank. Additionally, the Oslo Accords divided the West Bank into three different areas, with Palestinians in Area A having full autonomy, limited autonomy in area B, and no autonomy in area C. (source). Although Jewish Israelis and Palestinian-Israelis have full rights within Israel proper, only Palestinians live under a different set of rules within the West Bank. Even though Palestinians in the West Bank do have limited self government, they are tried in Israeli military courts, whereas Jewish Israelis are tried in civilian courts. According to Freedom House, Israel also limits freedom of the press in the West Bank and makes it difficult for Palestinians to have full freedom of movement both inside and outside the West Bank (source). Given some of these examples, it is understandable why some people are hesitant to call Israel a full democracy.

According to dictionary.com, the definition of apartheid is: any system or practice that separates people according to color, ethnicity, caste, etc. Given this simple definition, it is understandable why many people on the left believe this about Israel. However, it is more complicated than that. Similar to the first point, they fail to distinguish between Israel within the 1967 lines and Israel’s presence in the West Bank. Within the 1967 lines, Israel is not apartheid, for the reasons stated in the first point.

Where it gets more divisive is in the West Bank. As stated above, Israel has never officially annexed the West Bank and therefore we cannot legally consider the West Bank part of Israel. Is it true that there are different sets of laws for Israelis and Palestinians in the West Bank? Yes. Is it true that Palestinians live under a military occupation. Yes. The military “occupation” of the Palestinians exists. We should not deny that. We should not deny that there are similarities to apartheid South Africa, and that the current path Israel is on COULD lead to apartheid. FW de Klerk, who oversaw the end of apartheid in South Africa, has echoed this statement (source). We forget however, that Israel has made multiple offers to end this occupation and this “apartheid” of the Palestinians. Many of these offers met almost all the Palestinian demands, and yet there is no peace. Why is this? That is up for debate, but we cannot ignore those offers when we discuss this allegation.

Arab states do not want peace with Israel

In 2002, the Arab Peace Initiative was introduced by Saudi Arabia and adopted by the Arab League. It was re-endorsed by the Arab League in 2007 and 2017. It calls for full relations with Israel upon the relinquishing of territories captured by Israel in 1967. It is not a perfect document, but the Israeli government has only recently shown “tentative” support for it (source). We cannot make the argument that Arabs do not want peace when they have clearly shown their interest in negotiating.

According to the UNHRC a refugee is defined as: someone who has been forced to flee his or her country because of persecution, war, or violence. Any Palestinian who fled or was forcibly removed during the 1948 war would apply to this definition. Why are descendants of Palestinians still considered refugees? Host countries of refugees are normally supposed to absorb their refugees into their own populations, similar to what Israel did with the refugees from Arab lands, or what Europe is doing today with refugees from Syria and other war torn countries (source). Why should descendants of Palestinian refugees get special treatment? Expecting Israel to allow for the right of return for all refugees and their descendants is shortsighted and misguided.

It’s true that there are violent resistance movements within Palestinian society, including Hamas, Islamic Jihad, and the armed wing of Fatah. Those movements do not necessarily represent the larger Palestinian society’s desire for peace (source). It should be noted that the longer Palestinians are “occupied”, the less support they have for a peaceful solution. Many of these resistance organizations are in power because of violent takeovers or monetary support from other parts of the world. The Boycott, Divestment, and Sanctions (BDS) movement is seen in Palestinian society as a legitimate non-violent movement, but we should be wary of BDS leadership’s intended goals of ending the state of Israel through BDS. There are other Palestinians who engage in civil disobedience against settlers and the IDF (source). Shouldn’t we be encouraging people like Mubarak Awad, instead of associating him with violent resistors?

Settlements are the obstacle to peace

While these are only some of the talking points used by the right and the left, stating them as fact does not take into account the complex situation on the ground and the background needed to understand the meaning behind them. If we can move past the talking points and have the difficult and nuanced conversations about Israel and the Palestinians that need to be had, maybe we can move the needle in a positive direction toward peace.

So, what can we do to move away from talking points and toward deeper conversations? Here are a few tips, which I will elaborate on in a later post:

The world we live in is complicated. We need to treat it as such through real, honest conversations and not boil situations down to accessible, un-complex, and misleading points.