At first glance, you would think that Malik Faisal Akram, the Texas synagogue terrorist from Blackburn, had nothing in common with A-list celebrities. But you would be wrong, because Mr Akram and a growing number of actors and musicians on both sides of the Atlantic have (or had, as Mr Akram is dead) one big thing in common – they have been indoctrinated to hate Israel. And, certainly in Mr Akram’s case, to hate Jews, too, since we learn from Jewish press reports, including an exclusive story in this week’s Jewish Chronicle, that his hatred of Jews led him to state repeatedly that he wanted to kill Jews. (Despite this, the BBC seemed not to think his terror strike on a synagogue, on its Jewish congregants and on a rabbi constituted Jew-hate and did not therefore mention “antisemitism” as a motive for the attack in its main report, but I digress…)

In the celebs’ case, anti-Israel indoctrination leads them to focus all their bile and most (if not all) of their activism on Israel; it leads them to write “open letters” or issue press releases that contribute to the demonising of Israel; and it leads them to call for boycotts and sanctions against the world’s one Jewish state. But then Mr Akram and the celebs have swallowed whole the same false narrative comprising lies, half-truths and omissions that says Jews and Israel dispossessed the Palestinians and are therefore responsible for the plight of the Palestinians. This narrative handily plays into millennia of antisemitic tropes by asserting that Jews “stole” Palestine when actual historical accounts prove that Arab leaders rejected at least two offers of a Palestinian state before 1948; that the Palestinian refugee crisis was mainly created by Arab leaders and perpetuated, possibly deliberately, for political and PR purposes.

While Mr Akram was probably convinced of this false narrative via his Muslim faith, the artists and musicians who spout poisonous accusations and claim Israel is “an apartheid state,” have probably been persuaded via routes such as academia and biased media reports. Or maybe some celebs were infected with the anti-Israel virus via contact with a fatally infected fellow celeb such as the late Alan Rickman, who was a key figure in the Harry Potter franchise as well as the co-author of a play based entirely on Palestinian propaganda…

While I am appalled by the celebs’ unjustified venom towards Israel, I mainly pity them

Whatever their route to this Alice-in-Wonderland inversion of Middle East reality, having been infected by the Big Lie that Israel and Jews were culpable, Mr Akram and the celebs were primed to believe all the other poisonous libels and lies and to pump them out in a vicious cycle of lies amplifying other lies, replicating libels and echoing more lies…

And while I am appalled and furious at their unjustified, unjustifiable venom towards Israel, I mainly pity them for their gullibility; for their failure to see they are being used as Useful Idiots.

Mr Akram believed and the celebs believe they are engaged in the noble cause of aiding the Palestinians by opposing Israel. But if they broke free of their delusion and read some unbiased, factual history instead of relying on propaganda, they would see that the Palestinians are handy PR tools and political pawns, as they have been for 73 years. What the celebs completely fail to spot (and what Mr Akram failed to even consider) is that the campaign they have been suckered into is not about compassion at all. It was – and still is – a campaign to drive the Jews from their historic homeland and, ideally, erase the one Jewish state from the region. If that was not the objective, how do they explain the two full-scale wars and myriad terror attacks launched against Israel when Israel was a tiny enclave with access to just half of Jerusalem and without the West Bank, Golan Heights or Gaza Strip?

I am reluctant to label the Israel-hating celebs as antisemites, but it seems to me they are deep in denial and need to recognise that by participating in this campaign of demonising Israel, they are dabbling in antisemitism… however hard they try to convince themselves otherwise. 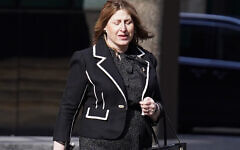