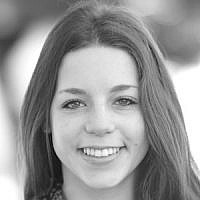 The Blogs
Jennifer Gurev
Apply for a Blog
Advertisement
Please note that the posts on The Blogs are contributed by third parties. The opinions, facts and any media content in them are presented solely by the authors, and neither The Times of Israel nor its partners assume any responsibility for them. Please contact us in case of abuse. In case of abuse,
Report this post.

In the third grade, my Hebrew teacher showed us a video that displayed Israeli Jewish homes, businesses, and livelihoods torn apart by the guns and missiles of the Second Intifada. The bullet holes were scars that danced across the walls in a melancholic melody of death and destruction.

Nearly 10 years later, when I moved into an apartment for the summer, I discovered that my randomly paired roommate was Palestinian. Almost instinctively, I said nothing about my Zionism.

Each time I set my laptop on the kitchen table, I flipped over my case to hide the bold blue and white lettered sticker pronouncing “STAND UP FOR ISRAEL” (a rather ironic action). When the subject of the Middle East came up, I pivoted around the subject.

In the evenings, my roommate and I would cook dinner together or walk the neighborhood. As we grew closer, I began to question my own cowardly actions. Why had I avoided this subject, a subject that strongly connects each of our identities by devotion to a common land? In questioning, I realized that I had never once spoken one-on-one with a Palestinian, let alone a Palestinian who was my peer.

It wasn’t my fault that I never had this interaction, for the community in which I grew up never once initiated it. The reason for the distance between the Palestinians and us was not out of hatred of Palestinians; rather, the basis was the belief that Palestinians hate the Jewish people. This concept, although unintentionally shared, was bred throughout my upbringing.

For so many years, the video from the third grade remained a very permanent image that shaped my entire interpretation of the Israeli-Palestinian conflict. I learned only of an incomprehensible hatred for the Jewish people. I felt only fear. I knew only of Palestine in the context of this violence.

In 2014, at the age of 15, I visited Israel for the first time. The night I sat in the Warsaw airport terminal waiting to board my flight to Israel was the night that the three Israeli teenagers were kidnapped. When I arrived to Jerusalem early the next morning, the street corners were already littered with candles in honor of the young boys. The kidnapping of these youth took a blow to the heart of the Israeli people and served as a precursor to the violence that would continue throughout that summer — Operation Protective Edge.

Once again, death and destruction were the melody I heard play across the land.

During my month of travel, every tour showed us the bomb shelter. I downloaded a phone app that alerts every time a rocket is fired into Israel. Some days, the notifications never stopped; I knew the eerie sound of the notification’s ping well.

While my roommate and I considered each other friends, we were in many ways friends under a false pretense; for as much as my identity as a Jewish Zionist defines who I am, so too does her own identity as an Arab Palestinian. To avoid this subject is to deprive us of any true empathetic understanding.

Late Friday night, as we sat around our rickety kitchen table in our apartment eating a snack of mini-pancakes, Nutella, and grapes, I began to share — my love for my homeland, my desire for peace, my belief in a two state solution. As we “broke bread” and my roommate began to open up to me, I saw the vast flaws in all I had learned to believe throughout my formative years.

I quickly discovered how our experiences were more than alike — they were parallel in nature — so much so that the fallacies that Jews and Palestinians live within can be summed up in two simple sentences: Palestinians believe that Jews hate Palestinians. Jews believe that Palestinians hate Jews. ​Just as I grew up believing that Palestinians hate Jews, she believed the contrary. When she began speaking with her Jewish peers about this conflict, her community did not understand why she would interact with those who did not approve of her identity. I listened to her while she shared the struggles of living as a Palestinian and the social stigmas she faced. Speaking with her allowed me to perceive the Middle-eastern conflict through an entirely new lens, for I no longer saw the Palestinians as an idea; I saw them as a people.

We both shared that all that either of us wants is peace. We are tired of the hate and violence that for so long have defined our communities relationships with each other. For the first time, I heard a new song play — a melody of peace and hope.

I began to question, why don’t Palestinian and Jewish groups have dialogue with one another? If students across the world from the Middle East cannot have a conversation about their similarities and differences, then how are our nation’s leaders supposed to talk about peace?

When we don’t come together, we are depriving ourselves of the empathetic interactions that allow us to understand the struggles and experiences of people different than ourselves. We must talk about it, for when we don’t we live in isolated worlds of false hope. In order for widespread change to occur, we must begin with ourselves.