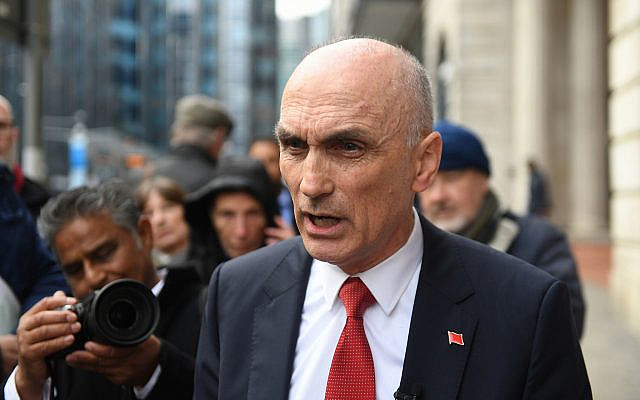 On the whole, I’m not in favour of boycotts. Those of us who oppose the BDS crowd and their frequently noxious activities ought to be consistent when the pendulum swings the other way.

Thus, in my opinion, if you feel as though there is something which upsets you and you don’t agree with it politically, you have a clear choice: participate or ignore it. Use the off switch if you feel that strongly, but don’t spout rubbish such as calling for an entire TV station to be boycotted.

But very occasionally, when all else has failed, there is the opportunity to confront bigotry where it lurks. And since such opportunities are rare, it is almost the more heartening to report a comprehensive takedown of the suspended Labour MP for Derby North, Chris Williamson, by Josh Lee, a student at Nottingham University, last week. Read more here.

Williamson was invited to speak at the university by its Centre for British Politics, and despite numerous protests that someone who had actually been suspended from the party over antisemitic comments should be given the hospitality of the campus, the event duly went ahead.

It was a well-attended meeting — and, I guess, loathsome as I find Williamson’s views, I might have been curious to hear what he had to say. Jewish students were there in force and Williamson, by all accounts, did not get an easy ride.

Despite lamentable attempts by politics professor Mark Stuart, chairing the event, to shut him down, Josh Lee openly challenged Williamson. He accused of him of “trolling the Jewish community” on social media, and asked how he had “the audacity” to describe himself as an anti-racist when he had openly defended a slew of well-known antisemites”.

Williamson’s response, I am happy to report, was limp in the extreme. He described attempts to paint him as an antisemite as “a smear” and then descended into an impenetrable self-serving burble which included references to Cable Street (of course) and having received bricks in the head for his anti-racist work before he became an MP.

I’m not one to encourage violence of any sort but at this point I couldn’t help feeling that the bricks in the head could have led to his present bizarre behaviour — because I’m damn sure that the ordinary voter of Derby North simply wants its MP to attend to issues of crime and housing, not attacks on the Jewish community.

It’s a point that’s often made, but nevertheless bears repeating: few of the adults in the Jewish community ever have the experience of confronting figures such as Williamson and the rest of the all-too-well-known sorry crew. Much though supportive messages from communal organisations such as the Board of Deputies or the Jewish Leadership Council are welcome, when it comes to the nitty-gritty there are only really three categories of challenge.

There are high-profile — and good on ‘em — warriors such as Rachel Riley and Tracy-Ann Oberman. There are street and meeting demonstrators, with whose tactics I don’t always agree, but it has to be acknowledged that they are not allowing the racists a free ride. And there are the Jewish students, as ever the ones in the front line, who so often have to take on the fight on behalf of the rest of us.

So as we continue to celebrate our High Holy Days, let us wave a lulav in admiration for Josh Lee. We are lucky to have him, an informed and committed Jewish student who refused to let Chris Williamson off the hook.