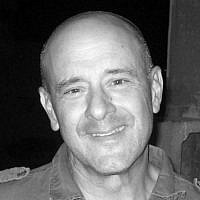 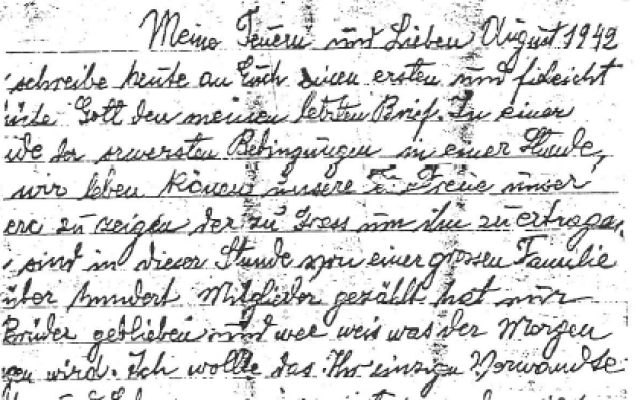 This month marks a sad date in the history of our family. Eighty years ago this month, a letter was written to us in the midst of the horrors of the Nazi onslaught of WWII.

Originating in the small community of Przemyslany, Poland (about 30 miles southeast of Lvov in what is today Ukraine), my great grandmother, grandparents, their siblings and cousins, from the Wachs and Mischel families, had emigrated to New York at the end of WWI. However, there were quite a few extended family members, including our Mandel family cousins, who remained and found themselves trapped when German troops occupied the town on July 1,1941.

The devastation of European Jewry was revealed in great detail at the end of the war and in the years immediately following, but in our family’s case, it wasn’t until my great uncle Jacob Wachs received that letter in 1953 that we found out what had happened to much of our family that had sadly remained in Europe.

The 9-page handwritten letter, composed by our cousin Isak Mandel, was dated August 1942 and was forwarded by a gentile man who lived in the town. His accompanying note stated that he had been given the letter by our cousin in 1943 and that he had asked him to send it after the war. Why it took eight years from the war’s conclusion to send it was not explained. It wasn’t until the mid-1990s that the existence of this letter was revealed to me by one of my older relatives, but in the years since, I have read it countless times and discussed it with my children and older grandchildren.

The translated letter is incredibly sad and I have often remarked that this one letter summarizes the entirety of the Shoah within its few pages. This month we remember the 80th anniversary of its being written and to honor the memory of our lost family members, I wish to share its unforgettable words:

My Dear and Precious Ones, August 1942

Today I am writing to you my first and, God forbid, my last letter. In an hour of the
most severe conditions in our lives … would that we can live to show our affliction and our pain which are too great to bear. In this hour there remains for me, of a large family of over 100 members, only one brother and who knows what tomorrow will bring. I wanted that you, the only relatives and companions of my life, find out at least about those who survived here, and in case we are not able to tell you all this personally.

I write these lines to you full of suffering and pain. We cannot fight anymore, all is lost, all destroyed. I want to describe to you how and with what cold-bloodedness and fury, at least in brief. Let the world know what terror and gangsterism really is. Every word is difficult for me in this language {German}, it would be easier for me to describe things in Polish but you would not understand it.

I am writing with pencil because there is no ink available where I am, my knee is my desk and my thoughts are hovering in the air. What we have experienced under the Bolshevist regime, that is absolutely nothing today; Siberia and all that, was gold by comparison.

Right away, on the third day, all our synagogues were burned. Many Jews were thrown alive into the flames, and thus it was; that was only the beginning. Then came the forced labor camp actions, from the nastiest and cruelest jobs in the city even if we were willing, it was a shame, I don’t want to talk about that.

Our people are registered in the camps by the satraps, without food, beaten to death. Our best sons, the most intelligent, are beaten until they are unable to work and then came the commandant and shot them down; it never needed a reason at all to be shot or beaten. Day and night, supposedly for a registration, they were collected in our camp, but people were shot instead. The deception went on, supposedly because of “registration,” 356 men were collected in our town over the age of sixty and then they were led into the forest and shot. That was on November 5, 1941, without reason and without any accusation. And that was the beginning of the very worst. I get dizzy in the head remembering; whoever was not there to experience it cannot grasp it. As a physician, I had to register too, and went through all this and experienced all this.

I am writing this in an hour of pain, may God grant that I can tell all this in a free country. Today my nerves are shattered, today I am almost insane and can hardly think. That was the beginning. Then came the months of hunger, people like wolves, like big barrels the faces, the legs, the bellies like pregnant women – and the children, when they were shot, they died like flies. One could not bury so many people per day. All efforts at charity could not help, there was no bread, no food supplies for Jews. Then came state help, then the actions were begun. First it was meant for the poor, but that was only a cover, 1,200 were caught with the help of an expedition of the SS. The people were put on trains and taken to Belzec; what is there you surely know by now.

Thus it went month by month. In December ’41 they made a ghetto, all the people from the countryside, from the cities, were squeezed into a crowded small section of the city. No one was allowed to leave under penalty of death. Up to 20 people in one room. And then began typhus fever to decimate us, but these were the blessed people who died by the hand of God, if only all had died in this way. And now I come to my own family tragedy, up till then I was able to protect those close to me as a physician with a practice. In the middle of May, there began in our province the action to clear it completely of Jews and now it reached us too, in our city, it started on May 23 with 1,800 sent to Belzec and from this day on the gendarmes shot a few hundred every day in the forest.

Our tragedy began on May 24, we gave to Molech [the angel of death] people in nine weeks:

Regina Mandel, my dearest mother, the personification of kindness

Jacob Mandel, 2 years old, child of my brother, who we called “Wunderkind” prodigy

Abraham Mandel, 43 years old, the only son, one of the most intelligent men in the city,
perfect Hebrew, German, English, and French

We younger ones were put in a forced labor camp.

On May 30 my grandfather, Mendel Mandel, 86 years old, was shot, of course, together with all the others. Every day the forest was turned into a slaughter yard. On June 21 we fled to the forest, in order to perhaps be able to save our lives. On June 13 my beloved bride and my sister, Minna Mandel, aged 27, with her the son of Pesach Adler, 20 years old and Henia age 15.  My fiancé, Feige Lichtblau, was 21. And this was the end of my tragedy.

All our remaining cousins were shot in the camp on June 14, so today, I, Dr. Isak Mandel and my only brother, Markel Mandel, we are numb and with a heavy heart and severely punished by God and fate, saved from the death of our dearly beloved and cherished, tortured by fear and terror as to what tomorrow will bring. Our situation is indescribable. We cannot show ourselves to people, live in the forest or sometimes with good people in the country of whom fewer and fewer can be found, and entreat the Almighty to grant us life, not in order to live, for we are not able to anymore, but to be able to tell the world what we have experienced on earth in the 20th century.

For ten years I carried the burden of helping people as a physician, day and night I worked always with the idea of saving people and not in order to earn money. The whole population of the town is my witness; nine weeks after the murder of my adored parents, three weeks after the murder of my eternally beloved sister, a girl full of youth 27 years old, I am like an old man, don’t know what to do, suicide or be killed by the SS troops, unless a miracle happens. With tears in my eyes I beg you, my dear acquaintances and strangers, visit our town, our mass graves in the forest. Acquaint yourselves with our tragedy, our shame.

We never learned the fate of our cousins Isak and Markel Mandel. They were never heard from again.

Although my great uncle donated the original copy of the letter to the YIVO Institute For Jewish Research in New York City decades before, not long ago I found a meaningful way to honor the memory of my lost family members by submitting a copy of the letter along with other family documentation to Yad Vashem’s ‘Gathering the Fragments’ Project in Jerusalem. I was given an opportunity to be debriefed by a 3-member team regarding everything I knew about our family during the Shoah. This ongoing project represents a national campaign to rescue personal items, documents and photographs from the Holocaust period along with documenting the names, stories, and testimonies provided by family members.

In the Project’s own words, “Items submitted together with the stories behind them have an important role in the commemoration of the Jews murdered in the Holocaust and in preserving their memory for future generations.”

About the Author
Howie Mischel is a veteran of the U.S. public finance industry. In a career spanning more than three decades he held managerial positions at several major financial institutions in New York and Boston. Following aliyah from New York in 2009, during the past decade he worked as an aliyah advisor at Nefesh B’Nefesh and with several start-up companies. He is a graduate of Harvard University with a masters degree in city planning. Today he lives with his wife Terry in Modiin, has four married children and is the proud grandfather of twenty.
Related Topics
Related Posts