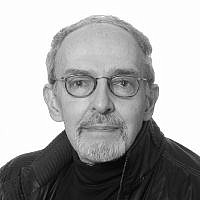 The Blogs
Edward Grossman
Apply for a Blog
Advertisement
Please note that the posts on The Blogs are contributed by third parties. The opinions, facts and any media content in them are presented solely by the authors, and neither The Times of Israel nor its partners assume any responsibility for them. Please contact us in case of abuse. In case of abuse,
Report this post.

To: m.donovan.jr99@gmail.com
From: Robert Anderson
Subject: None

Wonderful to hear from you, and no, you shouldn’t relocate to Vancouver.

I understand what you’re going through. What a shock. Is our country about to swear in a pig with a bird’s nest Velcroed on his head as its face and its voice to itself and the world? This can’t be true. It has to be a nightmare. Yes, despite what my old mère in Cleveland and old père in Milwaukee told me in October never did I picture this happening. I expected to go to bed here in Paris on a Tuesday night and wake up to find that deplorable old Bill’s deplorable old wife had made history of the glass ceiling.

What a shock which hasn’t abated but only grown as Inauguration Day nears. And if it’s no bad dream, if it’s the reality, the stone-cold reality, if tomorrow Donald J. Trump in his Make America Great Again cap is going to raise his little hand and pledge to preserve, protect and defend the Constitution, then self-exile becomes an option.

You say Randy and Dominick and Jacob have all lambasted you for thinking of it. What, go AWOL instead of staying to resist? They’re with Lena Dunham. She vowed she’d move to Canada if the unthinkable happened, but I read in Le Monde now that it has happened and she’s had a cry with her boyfriend she’s changed her mind. Her cry now is “Don’t Agonize, Organize!” Good for her, and for Randy, Dominick and Jacob, but as for us we’ve done our part. You say you gave Bernie many times $27. So did I, and when he quit we did what he asked, we held our noses and voted for that woman. And so we’re entitled to wait and watch and see how things develop under President Trump in and from wherever we like.

But forget sane and boring Canada and be with me instead.

Did you know I was here? I’ve been in a hotel around the corner from the Arc de Triomphe since late October. The idea was to vote absentee, jump on United, help curate a show on American art of the ‘30s at a museum called L’Orangerie next to the Louvre and return. Maybe you know it’s called that because when constructed in the 19th century it sheltered the orange trees of the garden in the Tuileries, formerly the home of kings and emperors. But then the American people——or at least the Electoral College——spoke, and tomorrow a pig in a wig will become our president, king and emperor all rolled into one.

A pig my sweet old mom and not-so-sweet old dad both voted for. I’m attaching the pre- and post-election emails they sent me. What about you? Did you get anything from your folks? How did they vote?

You’re right——if old Trump had come up short in the Electoral College while garnering three million votes more than old Mrs. Clinton he probably wouldn’t have conceded but lawyered up and even fomented riots. Plus you say he’s a fascist. I wonder. All fascists are demagogues, and he’s a demagogue, but not all demagogues are fascists.

Do you know I met him once? Yes, at a black tie at the Whitney, the year I graduated from Yale, he was married to old Ivana but had old Marla on his arm and I pegged him as a liberal if he was anything, not a fascist, just a balding bankrupt from Queens nursing an inferiority complex beneath the mask of a swinging dick. As recognizably American in his way as apple pie.

Flash forward and unbelievably, nightmarishly, in a matter of hours he becomes what I never and probably he never imagined——the commander-in-chief. Still, he’s in the American tradition of either the con man or the populist or both. If the Duke and the King in “Huckleberry Finn” were con men believing not a word of what they were telling the yokels, then Denis Kearny, William Jennings Bryan, Father Coughlin and Huey Long were populists who may’ve believed their own spiels but were quashed in time by the Republican progressive Teddy Roosevelt and later the Democratic progressive Franklin Roosevelt.

Correction: Long was felled by an assassin’s bullet.

Even when making waves Kearny, Bryan, Coughlin and Long didn’t go in for uniforms and guns, the calling cards of fascists. The closest we’ve had to the real thing have been the Klan and——as Phillip Roth mentions in his alt-history novel which I ran across in translation in a bookstall on the Seine——the German-American Bund, the Nazi front which flared, crashed and burned in the late ‘30s and early ‘40s. I read the original a dozen years ago.

Now I’m reading a chapter or two every night alone in bed with a French-English dictionary. Sure, unlike Charles Lindbergh does in Roth nobody like the Donald has moved into the White House before. And sure, many vermin crawled out from under their rocks to glory in his election. It’s nightmarish enough that a con man and a demagogue is taking the oath but so far I’m not sure he’s a fascist or the harbinger of fascism.

Huh! What do I know? I expected a woman in a pants suit whose only qualification was her having stayed married to a horndog for 874 years would be taking the oath, right?

You blame the Jews for the Democrats nominating the only natural-born American over the age of 35——-there must be 200 or 250 million of us——the single one who couldn’t beat the Donald. Well, I see where you’re coming from, as the under-35s say. According to Le Monde vanishingly few Jews voted for him, they nearly all voted for the hag, but it was a tiny gang of zillionaires of Jewish extraction who made certain she and not Bernie got the nomination. Pritzker, Simon, Spielberg, Saban, above all Soros. They bankroll the party, and he who pays the piper, etcetera. How ironic! And you’re right, the Gray Lady will never touch the story with an 11-foot pole.

Anyway, whether he’s just a con man and a demagogue or something worse you have to join me in Paris. Boredom won’t be an issue.

Granted, now that I’ve been here almost three months I can tell you this place isn’t the one I got to know a bit in quick visits in the ‘90s. And it’s certainly not the one Vivian became knowledgeable about in 36 months half a century ago. It’s not the place where she beat the culture shock of a fresh Mt. Holyoke grad, put on weight, sampled lovers, had an abortion, illegal then, discovered the central heating qualities of Calvados, attended Sorbonne classes, even mastered French so well she understood more than a few of the puns in Le Canard and learned to smoke Gauloises——or was it Gitanes?

Let me tell you about Paris nowadays.

Just yesterday I saw a lady crooning to her poodle as it dumped on the sidewalk in front of the Ralph Lauren outlet on the Boulevard St. Germain. If you think she went on to scoop up you’ve got another think coming. So you have to watch your step even in the 7th and the 16th, meaning the classy 7th and even classier 16th arrondissement or district where I’ve been laying my head. No problem. It’ll become second nature.

Speaking of which I know you’ll be wanting to bring Ralph. No problem. They won’t even quarantine him. All you have to do is have him microchipped and bring a rabies vaccination certificate and he’ll be jogging along the Seine with us from day one.

Jogging with nary a care.