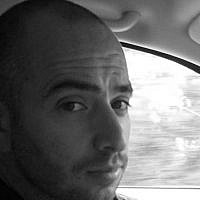 The Blogs
Zak Meyers
Apply for a Blog
Please note that the posts on The Blogs are contributed by third parties. The opinions, facts and any media content in them are presented solely by the authors, and neither The Times of Israel nor its partners assume any responsibility for them. Please contact us in case of abuse. In case of abuse,
Report this post.

Your grandfather once told me: “You won’t ever have to worry about forgetting you’re Jewish, because there will always be someone there to remind you.” As he marked his 70th birthday this past week, it caused him to reflect on his life. As I received an email of these musings, it caused me to reflect on mine, as well…

I wasn’t there to celebrate this milestone with him. Instead, I was here, in Israel, living out an ancient dream of an even more ancient people. Rather than gathered around the table in honor of the patriarch of my lineage, I was in a distant country, with no family and a network no older than the day I returned to our land less than 18 months ago. Rather than exploiting a verbal facility of language accrued over 30 years, I was breaking my teeth over remedial interactions. Rather than allow myself to fall into the safety net of a place I once called “home,” I was weaving another around my redefinition of that concept. I abandoned all I once knew, in search of what I seek to know.

And all that I shall find, my dear unborn child, I shall give to you…

It is in this ground that I wish to plant fresh roots of my family tree. For you, my child, have I chosen a place rife with internal conflict, where splinters from a fractured people pierce the skin of our collective body; a place surrounded by enemies whose very existence is dedicated to our destruction and who work tirelessly to achieve those aims; a place tried and convicted even before indictment by the international community, whose disdain for our survival is palpable. Abandoning a life of privilege in the US to relocate to Israel perhaps isn’t the most practical decision. Then again, belief never is.

It is in this place that I have chosen for you, my child, where you shall grow up among a people united by a greater purpose, who recognize their unique role in history; a place that has witnessed the perpetual defeat of its adversaries, after countless attempts to destroy it; a place that refuses to bow to the ill-will of those for whom its mere existence is an inconvenience. A magical place, unlike any other the world has ever known.

Here, my child, things don’t just go bump in the night. They go “boom” and “bang” at all hours of the day. Monsters don’t hide under your bed; they hide among civilians. Your covers won’t protect you from them, but our army will. Waking up won’t stop the nightmares, but those, too, shall pass. Life in this place isn’t easy, but things of value never are. There will be struggle, but it will have merit. There will be strife, but it will have meaning. More than anything, however, there will be constant reminders of who you are: a Jew.

When they refuse to treat you, a Jew, as an ordinary person, you shall become extraordinary. When they treat you, an Israeli, as the exception to the rule, you shall become exceptional. Where I shed the rags of the Diaspora, you will wear the robe of kings. Where I was “the return,” you are “the renaissance.” צהייל will be emblazoned on your chest, where there was once a star. You will cry at the sight of Zion, where we once cried to return. Your heroes will be legends from the land, rather than stars from the screen. You will speak the tongue of the prophets, rather than the language of the exile. You, my child, will be the first of our line to be born in the Land of our Fathers.

I wish, my dear unborn child, that you won’t ever have to worry about forgetting your Jewish…because I will always be that someone there to remind you. But a day will come, when I will be called back… For when it does, you will have this letter.

So remember these words, my child.

Remember what I taught you.

Remember who you are:

You’re a Jew. You’re an Israeli… I couldn’t be prouder.

About the Author
Zak Meyers is a filmmaker operating out of both Israel and the United States. Originally from Chicago, he made Aliyah from New York and currently resides in Jerusalem. (zak.meyers33@gmail.com)
Comments