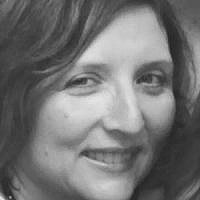 The Blogs
Ellina Zipman
Apply for a Blog
Please note that the posts on The Blogs are contributed by third parties. The opinions, facts and any media content in them are presented solely by the authors, and neither The Times of Israel nor its partners assume any responsibility for them. Please contact us in case of abuse. In case of abuse,
Report this post. 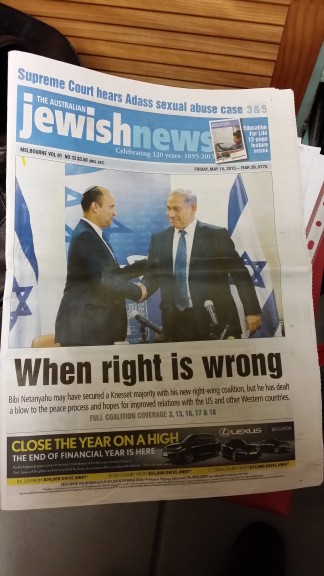 I refer to the front cover of The AJN from Friday 15th of May 2015 (When right is wrong) as your personal opinion. Please, Do Not Speak for the World Jewry or for the whole Jewish community of Melbourne and Australia for that matter.  Being the community newspaper, you are supposed to represent unbiased opinions and stick to the facts. It is my belief, that you presented such a controversial cover with the commercial purpose of selling more papers by enraging some community members and appeasing the others. However, such a headline played into hands of Israel-haters (read anti-Semites), and was also contradicting a number of your own editorials. Try to be consistent,

if you aim to continue being a reputable media. As far as the caption of that front cover is concerned, it is historically incorrect information. You claim that by securing a right-wing government, Netanyahu “dealt a blow to the peace process and hopes for improved relations with the US”. This is a ridiculous statement. One cannot deal a blow to something that doesn’t exist.  It is historical knowledge, that Israel extended the offer of peace to Palestinians many times by both right and left wing governments.

As you stated in a number of The AJN editorials, Israel does not have a partner who wishes to make peace with it, but only seeks its destruction. The partners, that EU and US would like to “impose” on Israel peace with, do not accept Israel’s right to exist and reject country’s claim as a Jewish national homeland. As for your fear induced line in regards to US – Israel relations, I would like to say the following: the only cause of worsened relationship between two friends in the last few years is a Jew-hater in the White House. The sooner he will leave the office, the sooner the friendship between two long-term allies will go on amend.

About the Author
Ellina Zipman is an internationally published writer. Born in Tashkent, living in Melbourne since 1989, Ellina completed her Masters degree in music, translated a book by the Australian author Steve Carroll 'Remember Me, Jimmy James' into Russian and was selected to participate in "Portability," a bilingual writers project at the opening of the Immigration Museum. She won third prize in Monash University's Russian Writers Competition for her story "Airports." Ellina's poems were also published in the 2012 anthology, 28 People Write.
Comments