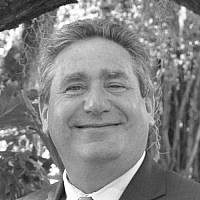 The Blogs
Jonathan R. Katz
Apply for a Blog
Please note that the posts on The Blogs are contributed by third parties. The opinions, facts and any media content in them are presented solely by the authors, and neither The Times of Israel nor its partners assume any responsibility for them. Please contact us in case of abuse. In case of abuse,
Report this post.

In the last forty years, rates of depression in the U.S. have increased dramatically.  Fortunately, for the majority of those who possess access to treatment, advances in medications have proven to be quite effective.  What genetic disposition together with the myriad stresses and anxieties of our age have taken away, modern medicine, to a great degree, has been able to return.

Franz Alexander, one of the most prominent figures in psychoanalysis recognized many decades ago that “A mark of mental health is the ability to repress our knowledge of the world’s cruelty, to be able to live in peace though surrounded on all sides by horror and violent death…. It is ironic that if a depressed patient walks into my office and says that the world is so grim that he cannot face it, I am to treat him as a sick person.  Actually, the patient is quite right.  He sees the truth only too clearly.  But he is ‘sick’ because he has lost certain basic defenses; he no longer has the normal illusions which keep us sane.”

Antidepressants act to restore these normal illusions. But is it healthy or even responsible to alter perceptions of reality?  Is the individual who finds his or her psychological outlook positively transformed by an elevated, synthetically-raised serotonin levels really the same person?  Is he or she truly made better or just appears to be so by means of a medically manipulated consciousness?  Though these questions continue to be debated, it can’t be denied that antidepressants have saved many lives.

A common criticism of religions is that they are illusions. The assertion is made that the waning of traditional belief in the last century has exposed these illusions; the faith claims associated with them should no longer be considered authoritative.  Whether regarded as an illusion or not, in many minds religion is failing due to an inability to effectively respond to contemporary existential turmoil.  In other words, its human relevancy has been superseded by advances in biochemistry.

But it’s not fair to judge religion on the same terms as a medical treatment, regarding it as a kind of antidepressant manqué.  A medication like Lexapro enables people to emerge from the shadows of despair to recapture personal vitality and greater self-trust.  Religion, too, is concerned with lifting spirits but in a different way by providing the context in which this vitality and trust are imbued with ultimate purpose.

Antidepressants seek to right imbalances in the brain while religion ideally aims to right imbalances in the world.  The former allows men and women to once again drink from the wells of a greater semblance of personal wholeness while the latter directs where these restorative waters need to be brought to revive attenuated ethical and social vision.

Judaism is not an illusion.  Certainly, its more than 3000 year historical record testifies to this.  So, too, it is focused on sanctifying daily living, not preoccupied with heavenly reward.  Judaism is real because its God is vested in human learning, creativity and justice not unquestioned adherence.

Nonetheless, many Jews operate under the impression that because Judaism is a religion it must be illusionary and, therefore, untenable for authentic theological understanding and expression.  Changing this perception has proven to be a considerable challenge.  When something’s scope has been narrowed, placed tightly in a box and dismissed as spurious, prompting people to subsequently reopen it and view what’s inside from new perspectives is rather formidable.

Because Judaism does not demand abdication of intellectual and spiritual curiosity but rather their cultivation, it remains a powerful vehicle for growth in many dimensions.  The issue now is finding stimulating and dynamic entryways ways that can articulate its potential value at a time when religion is perceived as fairly antiquated and inadequate.

The sacred continuum of worship, tradition and study that has sustained Jewish inspiration through the generations retains much less force.  This is especially regrettable because, while antidepressants can bring people out of darkness, they are not an end in themselves.  They do not provide a framework for redemptive possibility in myriad spheres that Judaism epitomizes.

If, indeed, Pirke Avot directs us to turn Torah (and by extension Judaism itself) over and over since everything is in it and not to move away from it because no better portion will be found, we have to be willing to entertain radically different approaches to Jewish engagement.  It is longer a question of trying to do Judaism the same way but simply more emphatically.  Nor will Judaism be preserved through Holocaust remembrance, heritage museums and Israel’s security.

No, turning it over means a willingness to, in the best sense, turn Judaism on its head.  This is, in the long run, is the only way it will be preserved.  When in search of gold, one has to turn over and a lot of ground to find it.  Antidepressants can reawaken appreciation of the preciousness of life but they don’t offer a pathway to its consecration.