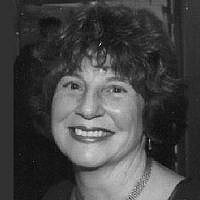 The Blogs
Lois Goldrich
Apply for a Blog
Please note that the posts on The Blogs are contributed by third parties. The opinions, facts and any media content in them are presented solely by the authors, and neither The Times of Israel nor its partners assume any responsibility for them. Please contact us in case of abuse. In case of abuse,
Report this post.

For the past several years, the editor of The Jewish Standard has urged me to start a blog, although my feeling has always been, “I gave in the office.” But there was another reason as well. I felt that I didn’t know anything well enough, in enough depth, to put my views out there for someone, God forbid, to take as some kind of guidance. Now, however, everyone is equally stymied, equally clueless, equally uncertain. So I feel perfectly comfortable lending my own voice to the ongoing discussion.

In a recent print column, I pointed out things I’ve learned about myself during this enforced isolation — from a certain fondness for bright colors to a continued desire for ice cream. [I also pointed out that LGO stands for Life Goes On, a clever, if inadvertent, echo of my initials.]

One of things I’ve uncovered is an entrepreneurial instinct, though the products I create (I call my necklaces “Quarantine Casual”) will never be offered to actual consumers. I also plan to record MP3s for nursing homes, but certainly not for profit. I guess the desire to produce, in itself, counts for something, even if the goal is not to get rich. (What in the world would they think of me on “Shark Tank”?)

What I miss most these days is certainty. On Mother’s Day, I spent a delightful few hours outdoors watching two of my little ones ride their bikes. By the way, at least in my family, the quarantine has borne some real fruit. Not only have these formerly, um, non-athletic youngsters learned to ride well and confidently, but they’ve both grown considerably, starting to fit into the sizes printed on their clothing. They’ve also grown academically, and for that I say thank you to teachers, but also well done to parents. The combination has worked magic on the reading ability of my granddaughter, who will no doubt go back to “real” school caught up with her age-mates in terms of hard skills.

Maybe there’s an educational lesson there, but, as I said, I’m no expert on anything substantive.

But that’s not where I was going with this. During my two-hour visit, I truly wasn’t sure what was “acceptable” and what wasn’t. Should I eat? Drink a glass of water? Take off my mask? I had already rationalized that my son is not capable of making me sick since he originated in my body. (It would be so ungrateful of him.) And since he is the designated family shopper, he is the one I have to worry about. Right? (I keep picturing Yente in “Fiddler” saying “Of course right!”)

And there’s the rub. We truly don’t know much about this scourge, though I have every faith in my ability to rationalize and absolutely no regrets about the afternoon. On the whole, both my son’s family and I have been extremely cautious. If celebrating Mother’s Day involved a smidgen of uncertainty, it was also balm for the soul. And the soul needs stroking too.

About the Author
Lois Goldrich, from Fair Lawn, NJ, is a writer for The Jewish Standard and a member of Beth Sholom in Teaneck. She served as communications director for The United Synagogue of Conservative Judaism for some 15 years, and her late husband, Kenneth Goldrich, created the Luah for the Conservative Movement.
Related Topics
Related Posts
Comments