73 years ago this week, three young men who were neighbors of my family, borrowed weapons from Soviet troops occupying post-war Poland, and returned to their home town to escort the remaining Jews out of Kanczuga for the last time. The three young men had survived the war that ended three months earlier, but the anti Semitism that fueled the Holocaust was alive and well.  They had returned to Kanczuga because of threats of a pogrom, to murder the remaining surviving Jews who had returned to Kanczuga.  The pogrom started a day before. Polish neighbors murdered seven Jewish survivors who had returned to search for family and restart their lives.  The Poles threatened to finish the job, murdering the remaining Jews of Kanczuga, the next day.  The second day of Passover.

25 years ago I got to know Willie, Yehudah, and Benny (*), the three then in their late teens who were then well into their 70s.  They recounted how they buried the seven murdered Jews of Kanczuga, and saved their surviving neighbors. They each shared with me parallel accounts of the same story, stories that after recounting they would say they wouldn’t be able to sleep for three days.

In a year when Poland has made it illegal to refer to Polish collaboration with and participation in the murder of Jews and other atrocities during the Holocaust, it is worth highlighting that it was neither Nazi nor Soviet troops that murdered the seven Jews of Kanczuga in April 1945, but the Polish neighbors of their Jewish victims.  Polish atrocities. Polish mass murder.  Polish death culture bread in Polish anti-Semitism.

For every one of the several thousand Polish “Righteous Among the Nations,” there must have been hundreds or more willing Polish accomplices.  That Poles were willing accomplices is an undisputable fact.  But in light of Poland today trying to whitewash its history, it’s worth underscoring.

The simple fact is that in Poland, countless Jews died at the hands of their Polish neighbors, before, and especially during and after the war.  This fact is not open for dispute no matter how many coats of whitewashing and revisionist laws are enacted.

While the murder of seven Jews of Kanczuga took place after the war without Nazi oversight, orders, or encouragement, the beginning of the end of the Jewish community of Kanczuga took place in August 1942.  Indeed, Nazi troops and SS went town by town rounding up, deporting, and murdering Jews wherever they could be found.  But in Kanczuga, and throughout Poland, they did this with the willing partnership, enthusiasm, and glee of Poles.

The following is excerpted from “Hidden” by brother and sister survivors Fay Walker and Leo Rosen.  They were born and raised in Kanczuga and recounted the last days of its Jewish community in August 1942.  It is quoted liberally here, highlighting the fact that even in the rounding up and murder of Kanczuga’s Jews, Polish neighbors and police participated willingly and enthusiastically.  Cases of Polish participation are noted are highlighted in red.

“We were hidden in the countryside by the time the war flooded the streets of tiny Kanczuga, until the screams and bursts of gunfire were as familiar as the cries of the peddlers hawking their wares in the town’s main marketplace.  More than a hundred of our people were executed at point blank range in front of the Brill’s house.  Then early one morning, two young SS men, ably aided by the Polish police, rounded up the hundreds of Jews who had not managed to hide in time.  The officers deposited them in the main square, where they stood in shocked silence, shivering in the sparkling dawn. 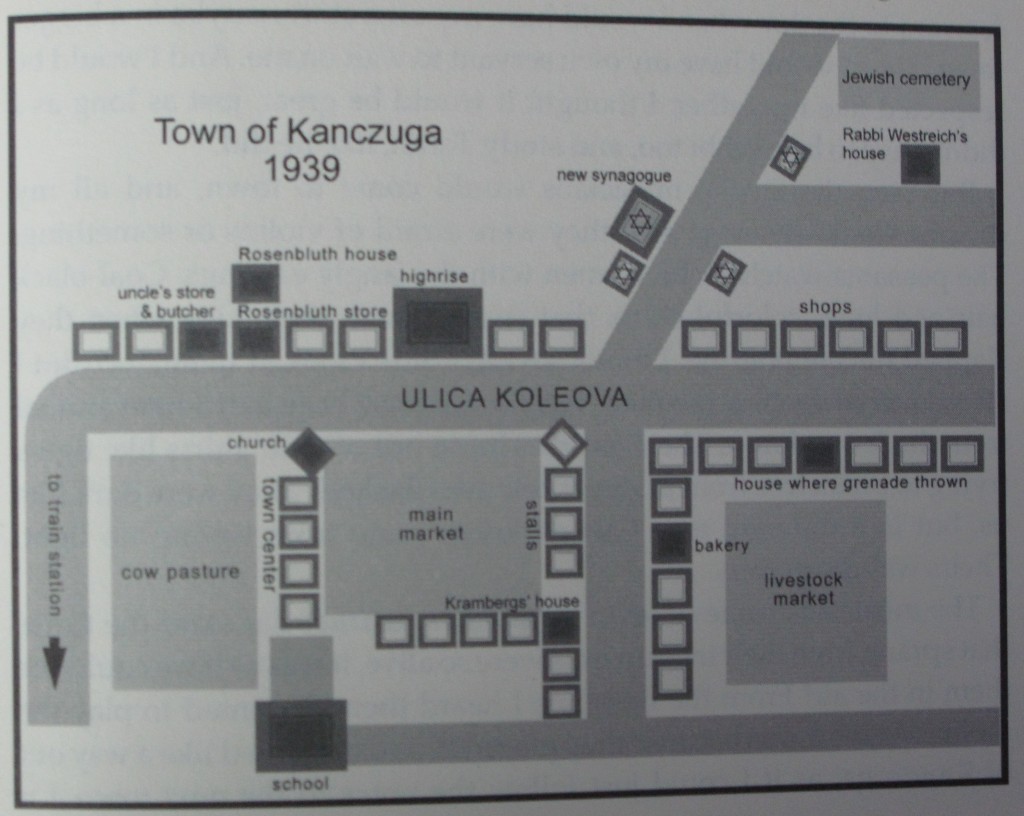 The police herded their prisoners past the jeering crowd in to the synagogue.  Our people struggled to stare straight ahead, but, as they trudged the dusty streets, they found themselves peering into the faces they had known all their lives, into the flat features and pale eyes of their closest neighbors, empty and cold as death.

Kanczuga‘s newest synagogue was a quarter mile from the Jewish cemetery.  Its sanctuary (was) large enough to seat several hundred people.  That Shabbos, every inch was filled for the first time.  Yet it was eerily quiet, the low murmurs punctuated only by the occasional barking of policemen.

Wordless, Tata fingered a pocket of his long, black coat and stroked his beard.  Beside him, Mamche, her face raw from weeping, rested a delicate hand on one of my sisters’ shoulders.  Now and then she whispered to little Tunia, who was serious even in the best of times.  (Her) olive-skinned face glistened with tears.  Pretty Senia, Aryan-blond and almost a teenager, seemed out of place in this group of frightened Jews.

With so many bodies huddled together, the room was close with the odor of human flesh.  People slept standing, straight as sentries; others twisted into unnatural positions on the floor.

A poor tradesman, cowering, consulted with Tata.  “Do you think they’ll deport us instead of killing us? Maybe send us away and spare our lives, God willing?”

Father shrugged.  “Who is to say? I heard that the families who didn’t come to the square to be picked up were shot in their homes.  We can only wait and put our faith in God.  God will provide for us.  God has never forsaken us.”

Like everyone else, my parents had come to the shul without packing a bag.

Shabbos morning arrived warm and bright, but musky with fear.  Several men began to daven, (pray). They were still praying when the police ordered them to leave their families and trek up the hill to the cemetery.  Mamche gripped the girls harder, her fingers digging so deeply into their flesh that they squirmed, but they did not break away.  Our father, never a demonstrative man, reached for our mother’s hand.  The gesture was so unexpected that she met his eyes with a smile.  Then the butt of an unseen rifle knocked Tata squarely between the shoulder blades, and he flinched and moved on without speaking.

They traveled a short distance in wagons.  A boy named Yankele Kelstecher jumped out of his wagon and disappeared into the woods before the policemen could fire.(*)  Then the men were ordered out of the wagons.  Perhaps the thought of Yankele gave the men strength as they climbed in a thin, halting line along the muddy path (weaving) through a cornfield.  At the crest of the hill was the tree-lined cemetery, its tombstones swathed in even rows of shrubbery.  The men paused to catch their breaths and wipe their brows.  They gazed out over the hill to the patchwork of fields below.  For a moment, they forgot their terror and shook their heads at the lush landscape.  It could not be helped; they loved this country.

A straight-backed officer handed out shovels and told them to dig.  “Keep digging,” he said.  “We’ll tell you when you’re finished. Thought you could get away with something, eh? Thought you could hide from us, you filthy Jews?”

When at last they were allowed to stop, the men stood in silence beside the freshly dug earth.  Their faces slick with tears and sweat, they stared at the raised rifles in astonishment.  At eyes opaque as marbles, that didn’t look back.

Then they saw the other eyes, those of their neighbors, the customers in their shops, the people to whom they had just last week sold a loaf of bread, who gave them a good price on chickens and eggs.  The goyim stood or sat on their haunches in unruly rows alongside the policemen.  Whole families, with baskets of cheese and bread and homemade wine.  The chattering spectators were in a festive mood, the women’s heads bobbing in their colorful scarves.

The policemen raised their rifles.  One hundred hearts were broken before a single shot was fired. When it was over, the audience applauded and cheered.

The next day, the sunlight was so fierce that the women shielded their eyes when they were led outside.  They climbed through the tall grass directly to the pit, as if they had done so many times before, children sobbing at their skirts.  A fetid smell they did not recognize reached their nostrils, and they covered their faces in horror.

When the policemen loaded their rifles, Senia clutched Mamche’s waist.  “I don’t want to die!” she cried.

For the first time in Senia’s life, our Mamche could do nothing to help. One policeman who witnessed this scene was so moved that, later, he would recall Senia’s words to the Kwasniaks, who had worked for us back in town.

Then a bullet shattered our little sister’s face, and she collapsed at Mamche’s feet, spraying blood in her new white shoes. Next, Tunia dropped onto Senia, her breath a shallow purr. Even before the third shot was fired, our mother fell on them both, trying to protect what was no longer hers. Beside the gunmen, the onlookers, some of whom had tied handkerchiefs over their noses to stave off the scent, clapped and shouted their approval. A burst of laughter skimmed the crowd.”

At the Passover Seder, we recite and recount a concise history of the Jewish people: In every generation they rise up against us to destroy us. And the Holy One, blessed be He, rescues us from their hands. In a generation not long ago, Poland embodied the rising up to destroy us. Let us pray this year that they get a better sense of history. It’s their call, whether they want to be part of this generation rising up against us or not. But either way, no matter who rises up, God has our back as He always has and will have.

* NOTE: In America after surviving, Yankele Kelstecher became Benny Schanzer and recounted this to me personally, crediting my great grandmother for inspiring him to run away and saving his life.