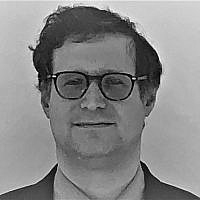 The Blogs
Theodore M. Lichtenfeld
Apply for a Blog
Please note that the posts on The Blogs are contributed by third parties. The opinions, facts and any media content in them are presented solely by the authors, and neither The Times of Israel nor its partners assume any responsibility for them. Please contact us in case of abuse. In case of abuse,
Report this post. 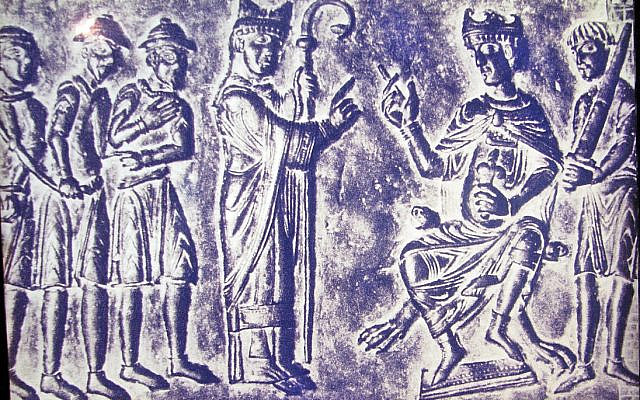 A Jewish slave trader being presented to Boleslas of Bohemia, at an exhibit at the Diaspora Museum, Tel Aviv. (Wikipedia)

For many American Jews who learn about the Civil War period, it is a shock to discover that Southern Jews owned slaves at a roughly equivalent percentage to non-Jews. “How,” we think, “could Jews in good conscience buy into such immorality?” Is not the Passover Seder, perhaps the single most compelling ceremony of the Jewish year, a stark reminder that God absolutely rejects the notion that one human being should own another? We are embarrassed that this unique and ancient ritual — which we trot out every spring before Christians and Muslims, Black and White, as symbolic of the eternally relevant underpinnings of Jewish ethics — did not give our antebellum co-religionists pause when seeing human beings sold at auction.

The unsettling answer is that for most of Jewish history the Exodus — of which we remind ourselves not only at Pesach-time but twice a day in the siddur — gave no indication of having a universal message. The Torah, when read without post-Enlightenment filters, emphasizes only that God freed the Jewish people from being servants (avadim) to Pharaoh that they might be servants to God. The reforms which appear to make slavery more palatable in the Torah, such as the seven year limit on servitude, apply in the main only to Hebrew slaves. Jewish law gives explicit permission to work slaves of a foreign race or nation oppressively, as the Hebrews were worked in Egypt (albeit with pious exhortations not to do so.)

That the Seder had no message of universal freedom is crystal clear from Maimonides’ how-to of the mitzvah of teaching young children about the Exodus on Seder night: “My son, all of us were slaves in Egypt, like this maidservant or like this manservant, and on this night God redeemed and liberated us [Mishneh Torah, Laws of Hametz and Matzah 7:2.]” Maimonides suggests, with not even a whiff of self-consciousness, that one point out the family slaves to help the child better understand.

Furthermore, it is not even completely clear that, in the context of antiquity and the Middle Ages, a slave was so much worse off than many others. As S. D. Goitein points out in A Mediterranean Society, male slaves were rarely expected to do onerous tasks, were often regarded as part of the family, and sometimes even held high positions in the government. It is noteworthy that the Rabbis of the Talmud were even unclear whether freedom was an unqualified benefit to a slave. (I would caution against extrapolating from this to slavery in America, which was deeply rooted in racism, involved backbreaking labor and often cruelty, and took place in a country that purported to claim that all men were created equal.)

In any case, by the 18th century, slavery was a long-accepted institution, and Halachic writings of the time permitted Jews to own slaves as property. When we come to the American South of the 1800s, the historian Jonathan Sarna writes, in American Judaism, that, faced with no clear prohibition of the practice, most Jews simply did as their neighbors did. The Seder remained a ritual of Jewish peoplehood, not a protest about the rights of man.

Yet the powerful pull of the Passover story easily lent itself to the rhetoric of those who opposed human bondage. Two of the most-often mentioned Jewish abolitionists are Ernestine Rose, an outspoken atheist, and Rabbi David Einhorn, a champion of the radical wing of nascent reform Judaism. Einhorn’s courage in preaching against slavery in southern-sympathizing Baltimore is deeply inspiring, and it is often contrasted with Orthodox rabbis like Morris Raphall, who believed that nothing in Judaism forbade slavery. But it is important to note there were more traditionalist Jewish leaders who saw in the story of the Exodus a call to abolitionism. Sabato Morais, the hazzan of Mikveh Israel in Philadelphia and a founder of the Jewish Theological Seminary, said in 1864:

Not the victory of the Union, my friends, we do celebrate. What is Union with human degradation? Who would again affix his seal to the bond that condemned millions [to that?] Not I, the enfranchised slave of Mizraim [as quoted by Dr. Moshe Davis, emphasis mine.]

As slavery gradually became illegal everywhere, and as social justice became a cause dear to many modern Jews, one of the primary messages of the Seder became — either implicitly or explicitly, depending on what Haggadah one uses — the hope that someday all people will be free. This is true as well among acculturated Orthodox leaders. Rabbi Lord Jonathan Sacks, z”l, wrote:

The Pesach story, more than any other, remains the inexhaustible source of inspiration to all those who long for freedom. It taught that right was sovereign over might; that freedom and justice must belong to all, not some; that, under God, all human beings are equal; and that over all earthly power, the King of Kings, who hears the cry of the oppressed and who intervenes in history to liberate slaves.

I suspect that for many Jews today, the idea that for most of Jewish history Jews saw nothing contradictory between celebrating Passover and owning slaves comes as somewhat of a surprise. The process of development that made “freedom for all” an internalized value of Passover to me means several things:

Freedom is one of the values on display at the Seder, but so is Jewish continuity. As made clear above, for most of history the focus of the Seder was a specifically Jewish one. We should not reduce its message to one universalistic bullet point today. Pesach is about the origins of the Jewish nation and its distinct sacred texts, practices, and outlook. I encourage those who celebrate the Seder to delve deeply enough (as appropriate for those at any given Seder table or Zoom Seder) that this theme is not lost.

On the other hand, completely divorcing the Seder from current political concerns is questionable. The naked injustice of treating prospective immigrants with wanton cruelty, or ignoring the continued existence of slavery sometimes even right under our noses in the suburbs, are worthy and appropriate topics of Seder prayer and discussion. It does not, as Shmuel Rosner wrote a few years ago, “trivialize our sacred festivals and texts.” Such mentions are, in fact, a source of transcendence. Our now-universal recognition of the evils of slavery in America started out as a controversy that some rabbis had the courage to confront.

We cannot and should not pretend that our assumptions about what the Seder night means sprang fully formed from its original setting in the Torah. It has taken centuries of experience for this foundational story to encompass both its source as the birth story of the people of Israel and the legacy of freedom’s eternal value that it has bequeathed to the world. This extension of meaning does not make either of these understandings less authentic. Rather, the Seder’s double significance as a celebration of Jews’ efforts to protect our identity and heritage, and a summons to further the cause of liberty for the entire human race, creates a moment of the religious year that transcends and elevates both these motivations.

About the Author
Rabbi Theodore M. Lichtenfeld is on the faculty of Golda Och Academy upper school in West Orange, NJ. He previously served as rabbi at Congregation Agudat Achim in Schenectady, NY, and at pulpits in New Orleans and New Jersey. Rabbi Lichtenfeld completed a residency in Clinical Pastoral Education at Memorial Sloan Kettering Cancer Center with New York Presbyterian Hospital during the coronavirus pandemic in New York City. He was ordained at the Jewish Theological Seminary in 2001, and also holds ordination from the Academy for Jewish Religion. Rabbi Lichtenfeld, a Philadelphia native, lives in Rockland County, NY, with his wife and three children.
Related Topics
Related Posts
Comments