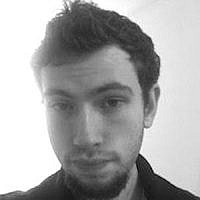 The Blogs
Ethan Freedman
Apply for a Blog
Please note that the posts on The Blogs are contributed by third parties. The opinions, facts and any media content in them are presented solely by the authors, and neither The Times of Israel nor its partners assume any responsibility for them. Please contact us in case of abuse. In case of abuse,
Report this post. 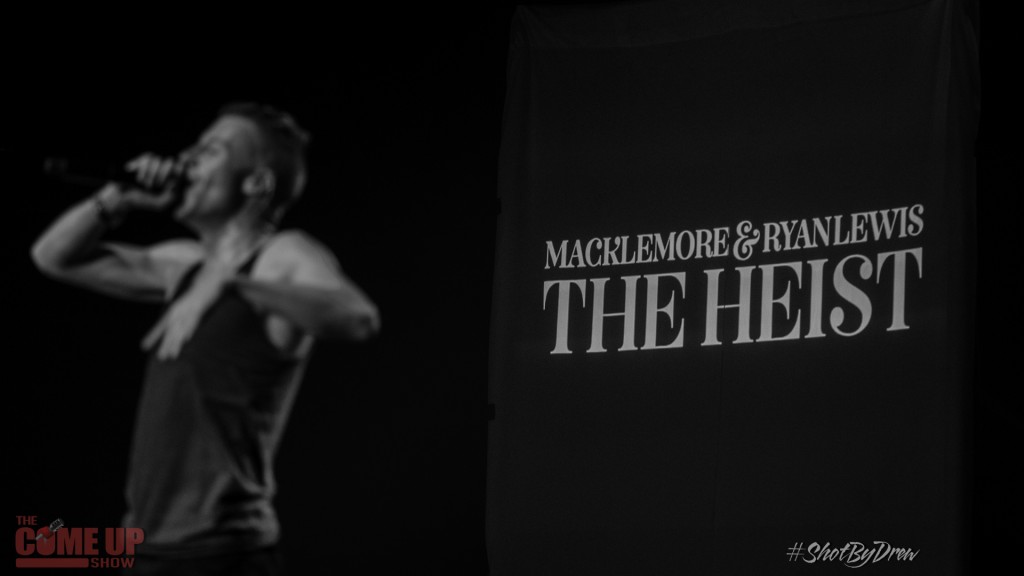 Macklemore performing during his ‘The Heist’ tour. Ironically, the album would go on to steal the Grammy for Best Rap Album from Kendrick Lamar’s classic good kid, m.A.A.d city. (Courtesy of WikiCommons)

Hound Dog, Or: How To Succeed In America Without Really Trying

Look at these eyes, baby blue, baby just like yourself,/

If they were brown Shady’d lose, Shady sits on the shelf,/
But Shady’s cute, Shady knew Shady’s dimples would help,/
Make ladies swoon baby (ooh baby!) Look at my sales,/
Let’s do the math: if I was black, I woulda sold half,

I ain’t have to graduate from Lincoln High School to know that.”

Shortly after performing on ‘We Are the World’ — the Michael Jackson- and Lionel Ritchie-penned charity single aimed at relieving African famine — Paul Simon approached two of the song’s producers, Quincy Jones and Harry Belafonte, seeking their advice on a controversial issue.

Simon was mulling over plans to travel to South Africa, which, at the time, was a pariah in the international community, due to its apartheid policies, and was under a cultural boycott from the U.N., which discouraged many artists from interacting with the musical community there.

Simon had recently come across a cassette — Accordion Jive Hits Vol. II — and was compelled to travel to Johannesburg to seek out the musicians. “After about three weeks of listening to it, I said ‘this is my favorite music, I’m not interested in listening to anything else,’” Simon said, to NPR.

Two years later, Graceland, Simon’s resulting synth-soaked excursion through the Mbaqanga of Africa and the Zydeco of New Orleans, had sold six million albums — with one of the tracks off the cassette, the Boyoyo Boys’ ‘Small Time, No. 4,’ becoming Simon’s ‘Gumboots.’ (Maybe another shot at redemption — “You don’t feel you could love me,/But I feel you could.”)

In the ‘80’s, Paul Simon wasn’t the only white artist to add an African percussive influence in his music — it was found in songs like Toto’s “Africa,” which topped the charts in 1982, or in albums like the Talking Heads’ Remain in Light and Peter Gabriel’s So — he was just the one that revitalized his career off it.

But some did not think that these where the days of miracles and wonder: when Jonas Gwangwa, an accomplished South African jazz musician, was asked about Simon propagating his music, he purportedly said, “So, it has taken another white man to discover my people?”

Last week, Macklemore released a 9-minute saga entitled ‘White Privilege II.’ But before we get into that, let’s preface this by stating the obvious: we’re in a different era of rap. For example:

‘White Privilege II,’ is astutely self-aware and self-conscious, which might equate to a middling rap record in some hands, like Twenty-One Pilots’ too-cutesy-by-half ‘Stressed Out.’ But Ben Haggerty — a.k.a. Macklemore — is a lot more clever than that. He goes the Eminem route — he insults himself like B Rabbit in one section; he creates antagonists he voices himself; he is his own worst enemy.

It is easy to come into the record fearing it would just be some sanctimonious screed. Viewed from this sense, it is a sort of surprising record — it’s surprisingly deft, maybe not the hap-tip to Peggy McIntosh that Macklemore thinks it is, but it’s his contribution, and at least the voice is sincere, and that’s the currency of creativity in this rap game. It’s knapsack rap.

Macklemore has treaded this territory before, in 2005’s perhaps more on-point ‘White Privilege’: “I said I’m gonna be me, so please be who you are,/But we still owe ’em 40 acres, now we’ve stolen their 16 bars.” (Of course, rap isn’t a zero-sum game, but that bar hits.)

In the original ‘WP,’ he compares Eric Clapton to Jimi Hendrix, which, in this case, is an almost too perfect analogy, since Macklemore’s schizophrenic style and production on ‘WPII’ seems similar, stylistically, to Kendrick: Clapton may never have played a sour note, but he never reached those wild blues peaks that Jimi could hit. Lyrically, you could say the same about Macklemore and Kendrick Lamar.

(Also, n.b.: Clapton has won 18 Grammys, while Jimi did not win a Grammy during his lifetime—though he eventually won 6 posthumously. Hindsight always seems to be 20/20.)

Before his death, the Notorious B.I.G. had a project in the works to form a super-group with members of his Junior Mafia clique and Jay-Z, called the Commission—the name derived from a body of influential Mafiosos that linked up the New York and Chicago crime syndicates for nearly 55 years.

In the intro to Life After Death’s ‘What’s Beef?,’ Biggie introduces the Commission: Jay-Z with the moniker “Iceberg Slim,” introducing himself as “the black Frank White,” the violent drug lord played by Christopher Walken in The King of New York. But these are embellishments — perhaps true in spirit, but more likely figurative than fact.

Many of rap’s legendary albums — Reasonable Doubt, Ready to Die, Fishscale — are Tony Montana-influenced inversions of the American Dream. Arguably, rap is just the latest bastion of this Dream, whose themes often revolve around the accumulation of wealth and material possessions often meant to convey moneyed status.

These stories are artificial to a degree, mostly ruses. Shawn Carter and Christopher Wallace might have sold drugs, but, on a record, they are primarily storytellers — glorified Iceberg Slims. (This makes sense: I mean, one of Jay-Z’s biggest songs is called ‘Big Pimpin’,’ not to mention that Jay-Z literally called himself Iceberg Slim in In My Lifetime, Vol. 1’s ‘Who U Wit II.’)

Those East Coast-style Rap classics from Jay-Z and Biggie and Ghostface took many of their cues from the Italian-American mobsters and their associates — the fictional ones, like the Corleones and the Scorcese gangsters of Mean Streets, Goodfellas and Casino, and the real ones like Bugsy Siegel and Lucky Luciano.

Crime was never really seen as glamorous until Arnold Rothstein, the Jewish bootlegger behind the 1919 World Series betting scandal, turned gangsterism into something ostensibly fashionable, a prescient version of ‘radical chic’: a ‘gangster chic.’ Luciano, years after, would claim that Rothstein taught him how to dress.

Rothstein was seen as the real-life archetype, if not the inspiration, for Fitzgerald’s Jay Gatsby, flailing after the American Dream, one of the first notable incarnation of the “Fake it ‘til you make it” model.

So in these albums, these self-projections serve as characters and scenes: Jay-Z, recording Reasonable Doubt, only had ‘Cashmere Thoughts,’ Biggie was still living an ‘Everyday Struggle.’ Both were hungry and looking to others for inspiration.

Both artists were influenced by Big Daddy Kane — whose stage name was taken from a combination of Vincent Price’s character in the 1963 surfer movie Beach Party, Big Daddy, and David Carradine’s character, Caine, from the ‘70’s ABC show Kung Fu.

Regardless of the source material, art is naturally in a continual state of appropriation and reinvention. Wu-Tang Clan would later expand on the Asiatic marital arts theme, Biggie and Jay-Z and Nas on the gritty, sordid storytelling.

This wasn’t all rap had to offer: there has always been critical acclaim surrounding, say, the political-punk of Public Enemy or KRS-One, or the hippy Afrocentric-new wave of A Tribe Called Quest or De La Soul or Black Sheep, but they did not receive the mainstream response that the others got.

This is where Kanye West’s genius really starts to show: in his musical palette, in his blending of the mainstream and the obscure, with those songs he so famously samples out of left field—in the best album of the past 5 years, My Beautiful Dark Twisted Fantasy, King Crimson sits comfortably alongside Smokey Robinson alongside Bon Iver alongside Gil Scott-Heron—it’s virtually a musical smorgasbord.

Kanye realizes that, in some senses, music can be colorblind, in that all music is appropriation, and that, on some level, it can be appreciated free of the contexts that usually mars everything else. It exists purely as sound, which can have no natural color.

But we don’t live in a utopia: we continually choose to divide because we are a divided culture, a divided society under a divided sky. Nevertheless, Kanye is able to see that supposedly disparate art forms—ballet and hip-hop, in the ‘Runaway’ video, comedy and tragedy in ‘Blame Game’—are not as far apart as we would think.

Kanye West, like Simon, has always been a worldly musical troubadour. Simon has just had different sources, like in Graceland, or in Bridge Over Troubled Water’s Peruvian-influenced ‘Cecilia’, or in the English folk that lined a lot of his early career.

So is this musical appropriation perhaps another form of colonialism, or perhaps a photo opportunity, another shot of redemption? Maybe it’s neither, maybe it’s just the myth of fingerprints: it’s the thing that everybody believes makes themselves unique, yet is, at the same time, a characteristic that everybody shares, thereby, in some ways, making everybody the same. Perhaps it’s just a cultural byproduct of capitalism.

But this country is not in a place where it can extricate itself from its past, as we are continually beholden to history, even if we are ignorant of it. Certainly, musical gentrification should be preferable to segregation, at least when it is done with a sense of reverence. But music isn’t always the panacea we think it is: it’s a good source of hope, but hope gets you nowhere unless you do something about it.

In spite of itself, satire often has the best ways of framing things. From Huey Freeman in the Boondocks: “Here is the danger of too much hope—skeptics are treated like blasphemers, and indifference becomes equal to hate.” So, what’s the point of talking, if no one ever learns?

About the Author
Ethan Freedman is a music producer by volition and a journalist by vocation. His photos and clips have been published in publications such as Ha'aretz, Al Jazeera English and IPS News, and he has reported from Israel, Cuba, England, Washington D.C. and New York.
Comments
Advertisement