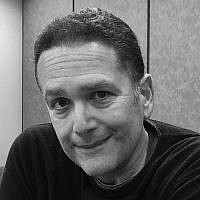 The Blogs
Douglas Gladstone
Apply for a Blog
Please note that the posts on The Blogs are contributed by third parties. The opinions, facts and any media content in them are presented solely by the authors, and neither The Times of Israel nor its partners assume any responsibility for them. Please contact us in case of abuse. In case of abuse,
Report this post.

“I know how you people like to stick together,” said Filieau. “(So) tell your Jewish grandson to shut up.”

Unable to listen to the anti-Semitic rant any longer, Beyer rushed onto the bimah and proceeded to excoriate Filieau for his views. “I see what you are,” he told Filieau. “You would silence the Jews. All the Jews.”

What kind of weird time warp was this, anyway?

Beyer, Filieau and Maggio were all acting in performances of Home Made Theater’s production of New Jerusalem, David Ives’ play about the real-life Dutch philosopher Baruch Spinoza. A Portuguese Jew excommunicated from Amsterdam’s Talmud Torah Congregation in 1656, purportedly due to his subversive and provocative ideas, Spinoza was a proponent of rationalism — the idea that, as explained by an L.A. Theatre Works write-up, “one’s intellect is superior to one’s senses.”

A collaboration between Home Made Theater and the Saratoga Jewish Cultural Festival, New Jerusalem — which won Ives the 2008 Hull-Warriner Award from the Dramatists Guild of America — was made possible, in part, by a grant from the Jewish Federation of Northeastern New York.

New Jerusalem is one of those thought provoking plays the late Samuel Goldwyn  — the Hollywood producer who famously said that, if he wanted to send a message, he would use Western Union — would probably have despised. That is because it makes you think about the prevalence of anti-Semitism in today’s society.

One need only turn to the Anti-Defamation League (ADL) ‘s annual Audit of Antisemitic Incidents to know that extremist groups, Holocaust deniers and Neanderthals still give voice to bigotry and racism. Released this past April, the audit revealed that there were 2,024 incidents of assault, harassment and vandalism reported to the ADL in 2020 — the third highest year for incidents against American Jews since the organization began recording such data in 1979.

Incidents were reported in 47 states as well as the District of Columbia. The states with the highest numbers of incidents were New York, with 336; New Jersey, with 295; California, with 289, Florida, with 127 and Pennsylvania, with 101. Combined, these states accounted for almost 57 percent of the overall 2,024 number of incidents.

Of special concern is the fact that there were 1,242 incidents of harassment last year, which was 10 percent more than in 2019. The phenomenon known as “Zoombombing,” in which live video conferences were intentionally interrupted, was particularly disruptive; as more meetings moved online due to the pandemic, ADL recorded 196 of these incidents, with 114 of them targeting Jewish schools and synagogues.

Recent high profile incidents,  such as the mass slaughter at the Tree of Life Synagogue in Pittsburgh, Pennsylvania, or the despicable woman in Vienna, Austria who threatened a rabbi with a knife before stealing his kippah, only attest to the hatred.

And this past May, as the fighting between Israel and Hamas intensified, anti-Semitic incidents spiked too: for example, diners in a sushi restaurant in Los Angeles were attacked, punched and forced to endure disgusting diatribes.

When does it stop?  Who knows?  “6MWE” — the acronym for “Six Million Wasn’t Enough” — was emblazoned on the shirts of some of the domestic terrorists who laid siege to the United States Capitol on January 6, 2021. According to a published account, the shirts were doing boffo business on Amazon even before that day which will also live in infamy.

New Jerusalem may not be your cup of tea — as an entertainment vehicle, it makes you think a lot – but, given its subject matter, it’s arguably more relevant now during these turbulent times than ever before. Nowhere is this more apparent than when Filieau’s character attempts to defend his intolerant views.

“I have stood side by side (with the rabbi portrayed by Maggio) forging with my own hands a way for Jews and Christians to live together,” he declares.

If only more people could stop trafficking in hate and subscribe to that attitude, what a wonderful world it would be.

About the Author
Douglas J. Gladstone is the author of “A Bitter Cup of Coffee; How MLB & The Players’ Association Threw 874 Retirees a Curve.”
Related Topics
Related Posts
Comments