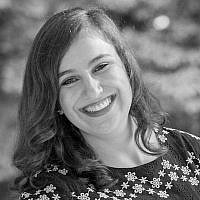 The Blogs
Talya Gordon
Apply for a Blog
Please note that the posts on The Blogs are contributed by third parties. The opinions, facts and any media content in them are presented solely by the authors, and neither The Times of Israel nor its partners assume any responsibility for them. Please contact us in case of abuse. In case of abuse,
Report this post.

Moving to a new city during a pandemic, as a single twenty-four-year-old woman, I have grown to see the incredible gifts that Judaism has given me. With the chaos around the world, I have needed the Jewish community more than ever to provide light at the end of a very dark and winding tunnel. Latching on to my Jewish identity during this tumultuous time has meant holding on to all parts of my Judaism, including the contradictory parts, as both a proud Modern Orthodox Jew and an unapologetic feminist. Clinging to my Judaism has been a dynamic and complex journey, as I have had to ponder what it means to be an observant Jew when we are distant from one another.

While male-centered prayer services were once the cornerstone of Modern Orthodox Judaism, COVID-19 changed that for many congregations.

For the past 12 months, as synagogues have grappled with how to react to the pandemic ravaging our world, congregants have taken a step back into the hiatus of their own homes. Judaism, a religion we tend to associate with communal ritual, has become more and more individualized, as we have been pushed away from one another. COVID-19 has taken what we thought was important and turned it upside down. While male-centered prayer services were once the cornerstone of Modern Orthodox Judaism, COVID-19 changed that for many congregations. COVID-19 was a moment of silence in ritual Jewish life that often moves at the speed of light. Perhaps we are supposed to use this lull in time to introspect about how the Modern Orthodox community can make everyone feel safe, welcome, and included. Yisrael — which literally means to struggle — is the essence of Judaism. We cannot mindlessly live our Jewish lives in a pre-programmed autopilot way; we must analyze our practices and remain aware of how our actions impact one another. I believe that each Modern Orthodox community has the power, and perhaps obligation, to engage in focus groups to gain a deeper appreciation for how each congregant has redefined Judaism during a global pandemic.

My new Modern Orthodox community in DC, comprised of many people whom I’ve never even met face to face, embraced this strategy. With the support of Rabbi Hyim Shafner, the rabbi of Kesher Israel, I decided to lead a focus group to dive deeper into the female Modern Orthodox experience unraveling right now. With each woman sitting in the comfort of their own home — a hiatus away from sacred traditional synagogue life — we opened a conversation that should be happening in this moment away from synagogue life: what does the future for empowered Modern Orthodox women hold? Is COVID-19 an opportunity in disguise to redefine what it means to be a Modern Orthodox feminist?

We cannot mindlessly live our Jewish lives in a pre-programmed autopilot way; we must analyze our practices and remain aware of how our actions impact one another.

Methodology
In order to delve into these complex questions, Rabbi Shafner and I sent out an email to many women in the Kesher Israel community gauging interest in a focus group. Since I had just moved to the DC community, Rabbi Shafner’s willingness to connect me with various women facilitated a smooth recruitment process. Once about 8-10 women enthusiastically committed to the event, I sent out a Doodle–a free online scheduling tool — to find a time that worked for all the participants. I sent several email reminders, including a calendar invite, and told each participant to bring a hot drink to keep it casual. I prefaced the focus group by explaining that the discussion would be documented in this blog post, while also reassuring everyone that their anonymity would be maintained. I started the conversation with an ice breaker; each woman introduced herself and shared her favorite female character in Tanach with the group. I prepared a list of open-ended questions that I used to facilitate the conversation. The questions ranged from “what have your experiences been as a woman in the Kesher community?” to “what draws you to Modern Orthodoxy” to “What practical changes would you like to see for women in the Modern Orthodox community?” I then served as a moderator throughout the discussion, ensuring that each woman had an opportunity to respond to each open-ended question I asked. I took notes throughout the conversation to document the results.

Each woman’s story was unique, but a passion for both Modern Orthodox Judaism and feminism created a strong unwavering bond between the participants.

Case Study: Kesher Israel
The conversation was vibrant and lively; I watched as each woman passionately spoke about her journey towards Modern Orthodox Judaism. One by one, each woman spoke about her personal story; eager and curious peers listening intently. I watched as mere acquaintances began opening up to one another about their innermost struggles with synagogue life, Jewish expectations, and gender roles. Each woman’s story was unique, but a passion for both Modern Orthodox Judaism and feminism created a strong unwavering bond between the participants.

There was diversity in the group’s upbringing — with individuals from all over the United States, one of whom grew up as a Conservative Jew and several of whom grew up in the Yeshivish community — bringing an added layer of complexity and nuance to the conversation. With a range in age as well, each of the women had unique insights about how their stage of life had informed their desire to be part of the Modern Orthodox Jewish community.

We generated a list of ideas that this specific group of congregants hoped to integrate into the Kesher Israel community. The ideas ranged from having a gabbait (a female gabaii), passing the Torah onto the woman’s side of the Mechitza, adding a Maharat or a female spiritual leader, giving women aliyot on Simchat Torah, and co-ed tisches.

We spoke extensively about cognitive dissonance, with many women saying that they compartmentalize their feminism when they walk into ritual spaces, so that the lack of female involvement does not bother them. One woman spoke about the problem of using incorrect language, such as asking for “10 people ” for a minyan, when in reality the community is really asking for 10 men, reinforcing the notion that in the Modern Orthodox community, people means men. I was amazed by the nuanced comments and ideas that each woman brought to the conversation, with each comment adding more insights to this complex issue.

We spoke extensively about cognitive dissonance, with many women saying that they compartmentalize their feminism when they walk into ritual spaces, so that the lack of female involvement does not bother them.

Interestingly, I observed that many of the women in the focus group avoided talking about women’s roles in synagogue rituals, with our conversation emphasizing the social, logistical, and learning aspects of a synagogue community. This seemingly was as a result of women compartmentalizing their feminism in ritual spaces, especially since several of the women had grown up in Yeshivish communities where women typically have an even more traditional gender role in Jewish life. Regardless of whether the participants were bothered by their lack of ritual leadership or had found a way to allay this frustration, it was clear to me that with the current status quo, Modern Orthodox feminists cannot bring their full selves into ritual Jewish spaces. Since no one wants to feel angst in a communal space which is supposed to provide comfort, many women just hold this cognitive dissonance within, never expressing it to the leaders of the community.

Since no one wants to feel angst in a communal space which is supposed to provide comfort, many women just hold this cognitive dissonance within, never expressing it to the leaders of the community.

The rich dialogue and deep passion that each woman brought to the conversation showed me the power of actively listening to your congregants. It is critical to create comfortable forums with which to discuss sensitive topics; the Zoom world facilitated this, allowing each woman to express her viewpoints while being in the comfort of her own home.

Broader Impact
While the results described above are specific to the Kesher Israel community, the methodology can be applicable to any Modern Orthodox community seeking to engage in dialogue. Whether spoken or unspoken, the tension between feminism and Modern Orthodoxy exists in every Modern Orthodox community — it is up to each community to decide whether to ignore this tension or address it through dialogue. Each community has the power to create a space to discuss women in Modern Orthodoxy and raise community awareness. While a focus group alone cannot create practical changes, it has the power to send the message that female input is valued. It takes a passionate congregant and a supportive rabbi to create a successful focus group that can lead to change. Intergenerational presence in a focus group is important to gather insights from women of all ages and stages of life. Zoom focus groups can create a convenient medium for congregants to come together in the confines of their homes. Before the focus group, the moderator should ask that each participant identify a private space where they will join the Zoom meeting, in order to ensure the confidentiality of the session. Throughout our discussion, I noticed how comfortable each woman was sharing her personal story, struggles, and identity. Zoom enabled each woman to remain in her own personal environment, facilitating a level of comfort to express raw emotions on a sensitive topic.

Throughout our discussion, I noticed how comfortable each woman was sharing her personal story, struggles, and identity.

Other communities can take advantage of this moment of Zoom and the safety it brings to engage in this conversation about women in Modern Orthodoxy. Maybe Zoom can help us as a Modern Orthodox community to ‘zoom’ out and critically evaluate how to make shul a place that is inclusive for everyone. This pandemic has refocused Judaism as a religion full of many mitzvot, not just communal prayer. This new perspective can and should help us to do the critical work of making Modern Orthodox Judaism a meaningful experience for both men and women. We must seize this opportunity as we transition out of our socially distanced lives back to synagogue life. We are stronger when we listen to one another.

Acknowledgments
I am incredibly grateful to Rabbi Shafner for being the first Modern Orthodox rabbi to push me to use my voice on this topic that means so much to me. More rabbis should do the same. Then, the next step is for rabbis and other religious leaders in the Modern Orthodox Jewish community to respond to these voices with change. Change informed by the congregants.

About the Author
Talya Gordon hails from Atlanta and is passionate about Judaism, feminism, and mental health. She grew up in a Modern Orthodox South African family. Talya graduated from the University of Maryland in 2020, served a Post-Baccalaureate Fellow at the National Institutes of Health and will be starting a PhD in clinical psychology at Yeshiva University's Ferkauf Graduate School of Psychology in New York City.
Related Topics
Related Posts
Comments
Advertisement