“When I’ve completed my studies, I want to go back home.” Mariam Eissa, Syrian Student from the Global Platform for Syrian Students (GPSS).

Mariam didn’t speak much, she held herself very straight, and spoke few, but sharp words laced with emotion and dignity, and reminded us all why we were working on our various initiatives, and what the stakes were: this young woman and many more like her.

A couple of months ago, I posted on the beautiful civil initiative by international volunteers, supported by the Mexican government called the Habesha Project, aiming to bring 30 Syrian refugees to Mexico in 2015.

This week the Université Libre de Bruxelles (ULB) hosted a two day international conference on Higher Education in Emergencies, organized by the Institute of International Education, the GPSS, the Arab League, the Council of Europe and the British Council.

Higher Education is one of the least funded and also the most complex humanitarian/development issue to tackle in times of crisis; lord knows it’s difficult when things are good. Out of any given population, on average only 32% of students have access to higher education, the percentage drops to less than 1% in a refugee camp, and represents barely 2% of humanitarian emergency budgets.

The onus of the conference was focused on Syria, and the multiple initiatives around it, and championed by Portugal’s Global Platform for Syrian Students and former Portuguese president Jorge Sampaio who is also at the heart of the Alliance of Civilizations.

The conference was a premier opportunity to bring together the actors involved in various aspects pertaining to higher education in crisis which focuses on two aspects: providing educational opportunities to disenfranchised students in exile, and protecting academics, scholars and professors from persecution.

Prospects seem abhorrently bleak looking into a civil war that has claimed more victims in three years than the Israeli-Arab conflict has in a hundred, and according to experts at the conference, the Arab Middle East ranks highest in the persecution of professors and scholars.

And yet, the Institute of International Education (IIE), based in the United States, through its Scholar Rescue Fund has been helping persecuted academics since the 1930s, and had a large program for Iraqi scholars in 2009.

The Council for At-risk Academics (CARA) has programs operating in Iraq and Syria, with a 90% return rate of academics to the region after training and support in the United Kingdom.

The German government, through the Ministry of Foreign Affairs, funds the DAAD, that has awarded scholarships to a hundred Syrian students this year, with a field-based process that allows participants flexibility in providing academic justification, travel documents and many other barriers that affect refugee populations.

The Arab League is working on “blended” technology-based alternatives to compensate for the lack of access in camps, by trying to increase online and vocational training in the camps, and while regional response to the Syrian crisis is often criticized, the Arab League is pushing for national universities under government funding, to make room available for the regionally displaced.

And of course the Habesha “hippies” according to one of the coordinators, are officially launching the Habesha Project in January 2015 at the Ministry of Foreign Affairs in Mexico City, their website is up and running (in Spanish, translations pending) and fifteen of the thirty candidates have already been selected.

These are only a few of the dedicated and passionate agencies, initiatives, experts and practitioners attending the conference, but I encourage you to visit their websites through the GPSS link above, and get in touch with those you can support or help, because winter is coming, UNHCR is running out of funds, Jordan and Lebanon are slowly reaching the limits of their goodwill, and while refugee situations go beyond emergencies to becoming life as they know it for those who suffer from displacement, their day to day reality depends on our actions, and we can all contribute to alleviating suffering. 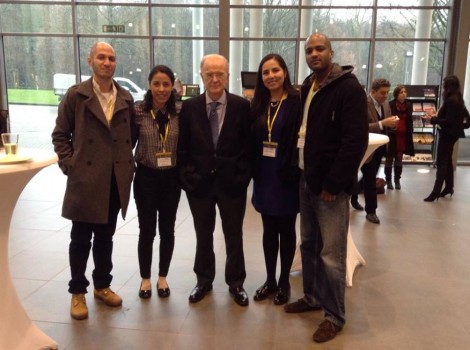 Members of the Habesha Project with President Jorge Sampaio