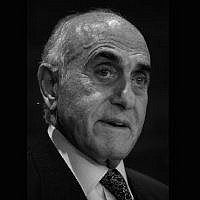 The Blogs
Munib al-Masri
Apply for a Blog
Advertisement
Please note that the posts on The Blogs are contributed by third parties. The opinions, facts and any media content in them are presented solely by the authors, and neither The Times of Israel nor its partners assume any responsibility for them. Please contact us in case of abuse. In case of abuse,
Report this post.

I remember well having lunch with Yasser Arafat in the Muqata in Ramallah, shortly before he fell ill with a mysterious and ultimately fatal disease. Just to get into the half-destroyed presidential headquarters I had to weave my way through an obstacle course of rubble. I was there with two Israelis, and because one wore a skullcap Arafat made sure there was kosher food on the table. With the Second Intifada raging for over two and a half years, and most Israelis convinced that if he could Arafat wanted nothing more than to push the Jews into the sea, one of his Israeli guests asked Arafat if he believed Jews had any place in the region. “Of course!” he said, jumping up from his chair. “What are you talking about! Joseph left Nablus and went to Egypt to become prime minister, and he did quite a good job if you recall. Moses later decided to come back. Ahlan wa sahlan! We are all a part of the Holy Land.”

Recently I’ve been thinking a lot about Arafat’s complex relationship to Israelis and the Jewish people — because I agree with him so wholeheartedly.

Over the past several months the American-led peace negotiations between our two sides have been bogged down by the Israeli government’s demand that Palestinians recognize Israel as a Jewish state. The entire discussion strikes me as a pointless diversion from far more important issues facing our negotiation teams. There might be something more calculated at work — a ploy to prevent the two sides from coming to any agreement. The first time the Arab world offered Israel a full peace was with the Fahd Plan in 1981. I nearly leapt out of my skin with joy when Crown Prince Fahd told me about his plan over the phone. His kingdom, and much of the Arab world, extended an offer of peace if Israel would withdraw to the 1967 borders and solve the refugee issue. Prime Minister Begin dismissed the plan as a devious plot aimed at the “annihilation” of Israel.

The offer got much better twenty years later with the Arab Peace Initiative, which was also a Saudi plan by Crown Prince Abdullah, and which promises Israel full diplomatic and trade relations with fifty-seven Arab and Islamic states, including Iran, in exchange for a full withdrawal and a resolution to the refugee issue. Ambassadors would be swapped, trade offices opened, Israeli tourists and business people could find friends and partners from Marakkesh to Dubai and Kuala Lumpur. The same Israeli government so keen on Palestinian recognition of a Jewish state has shown complete indifference to a deal that will gain Israel region-wide legitimacy and security. The Initiative is another trick, some say, to flood Israel with refugees.

These critics have failed to study the plan. In an extraordinary move, the API, accepted by the entire Arab and Islamic world, says about Palestinian refugees that there must be a “just and mutually agreed-upon solution.” The API, in short, makes no attempt to impose demographic, geographic, or political changes that contradict the democratic will of the citizens of Israel. The right of Palestinian refugees to return to the State of Israel must be exercised in full agreement with the government of Israel.

Which brings me back to Yasser Arafat. Arafat applauded the 1981 plan, recognized the state of Israel in 1988, in 1993 signed the Oslo Accord with Prime Minister Rabin, and in 2002 fully backed the API. And as the anecdote about lunch in his office shows, he recognized the Jewish people’s ancient history in our region, and its deep spiritual connection to the the Holy Land. Quite separate from the decisions made by diplomats and politicians, or the constitutions of states, is the basic fact that Jews and Arabs, both Christians and Muslims, have a common heritage in a common land. When Edmond de Rothschild visited Palestine in 1914 he urged the early Zionist leaders to live in peace with their “brothers” the Palestinian Arabs, fellow Children of Abraham. I, too, believe that our future two states, an Israeli and a Palestinian, will be based on this acknowledgment of what we share as Jews, Muslims, and Christians.

This op-ed originally appeared in Hebrew on the Walla news website.

About the Author
Munib al-Masri is a Palestinian industrialist, statesman, and patriarch of the al-Masri family, currently serving as chairman of the Edgo Group, a multinational energy and engineering conglomerate, and of PADICO, a holding company which controls thirty-five companies.
Comments