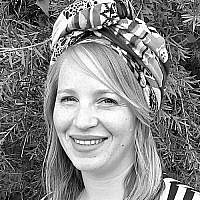 The Blogs
Miri Maoz-Ovadia
Resident of the Biblical heartland of Israel
Apply for a Blog
Please note that the posts on The Blogs are contributed by third parties. The opinions, facts and any media content in them are presented solely by the authors, and neither The Times of Israel nor its partners assume any responsibility for them. Please contact us in case of abuse. In case of abuse,
Report this post.

Yesterday morning, I got a call from a friend who is a reporter for Channel 13. “President Trump’s speech unveiling the Deal of the Century will be broadcasted tonight, and we think it’s very important to catch the reactions of the settlers in a live broadcast. This is your future we’re talking about.” Because Yishai is a friend, and because part of my job description includes spokesperson for the residents of Binyamin, the largest regional council in Judea and Samaria, I stepped up to the challenge and started making phone calls. As I expected, I couldn’t find anyone willing to oblige. I tried to explain to Yishai that it was a terrible hour when none of us want to sit in front of the TV, because we’re all busy bathing our kids and putting them in bed; we’re all busy living our lives and no one is going to gather around the screen just to watch the announcement of a state program that probably won’t actually come to fruition anyway; that no one feels comfortable talking about a political plan on live television when all of the final decisions are still unknown.

And so I found myself, as usual, recruiting my husband, my children, my living room, and three really nice neighbors who agreed to come. In hindsight, I am so happy that I sat in front of the screen and watched the full speech. This was definitely one of the most moving speeches that I have watched in my life. My jaw simply dropped again and again as I listened to the declarations made by the President of the United States. Resolute statements about the Jewish nation’s connection to the land of Israel and to the region that is the Jewish homeland. Legitimization of sovereignty over Israeli communities – to us, this always seemed like an obvious fact here in the settlements, but the world has begged to differ. Afterward, it was amazing to hear the Prime Minister speaking of our deep connection to our historic sites – to the Tomb of the Patriarchs in Hebron, to Shiloh, city of the Tabernacle. The land of the Bible. Listening to President Trump telling the members of all religions to come and visit the holy sites, and that these places need to be sites of peace, not of strife! Unbelievable. My job here is done!

For years, I have been hosting a diverse range of delegations in Binyamin, primarily from the United States and Europe, and I am always astounded by the dissonance between the international perceptions and our reality here in this region. As far as we are concerned, we live in Israel. Yes, we pass road blocks; yes, we function under a civil administration; yes, we live in the shadows of security tensions that sometimes overflow and sometimes lie silent. But we live in Israel. The Israeli communities in Binyamin, the Jordan Valley, Judea and Samaria are an inseparable part of the State of Israel – this is what we have always declared. On tours, I always try to relay a sense of our semi-normal everyday lives. In contrast, many of our visitors, whether they are journalists, politicians, elected officials, senior religious authorities, student delegations and more, are under the impression of an “Israeli occupation” and the illegality of the settlements. They meet senior members of the authorities in Ramallah, and then come for a “short visit to the settlements,” to hear some of the voices on the ground. They discuss the future of the Palestinian nation in Rawabi – a modern Palestinian city in establishment, and then come to Neve Tzuf and talk about settlement blocs, evacuating settlers and the potential consequences. Many of them visit Jewish communities populated by hundreds of people – parents, children and senior citizens, and without flinching, they discuss evacuating those people from their homes. “The painful price,” they call it.

We have been blessed with wonderful allies who love Israel – Secretary of State Pompeo, Ambassador Friedman, and apparently many other people whose names I do not know, who have worked very hard to bring us to this historical moment. We must be extremely grateful to them for everything they have done for the Jewish people.

“What was so important about the declaration yesterday?” my friends asked me, and this is the answer. We have won America’s recognition that we belong to the land upon which we live. That we are part of a long chain of generations who have returned to settle the heartland. Our need and our right to Israeli sovereignty over the Israeli communities has risen to the top of the public discourse. Not annexation, but sovereignty. The difference between the two is significant.

It is too early to address all of the parts of the plan. I would be happy to discuss it with whoever has already read all of its 181 pages. But the time has come for the Palestinians to understand too that being peace refusers and cultivating incitement and violence doesn’t pay, and it has a heavy price. We are sitting here in the heart of the country, alongside them, and we want to live in peace. If they take responsibility for the inciting entities, disarm and start to truly lead a discussion, and more importantly, behavior that is peaceful, they can extract themselves from the cycle of poverty and violence, as Trump said, and take advantage of this opportunity to do something truly beneficial for their people. A state or autonomic government – to determine that, we have negotiations, and as I see things at the moment, the political classification will undergo many more discussions before its implementation.

But we need to look forward and make this region bloom. Sovereignty means responsibility. For the infrastructures, for flourishing industrial zones, solving problems of environmental pollution and water resources, construction of tourism and commercial sites. The residents of the region, Israeli and Arab alike, can only benefit.

About the Author
Miri Maoz-Ovadia 32 years old, married+3 children, lives in the community Neve Tzuf which is located in the west of the Binyamin Region. Miri is the International Desk Director of the Binyamin Regional Council and has been a spokesperson for the Yesha Council since 2012. She has hosted hundreds of international delegations throughout the region and been responsible for various projects focused on advocating for the Judea, Samaria and Binyamin communities.
Related Topics
Related Posts
Comments