I spent last week in a small town in Germany. This is how and why I was there. 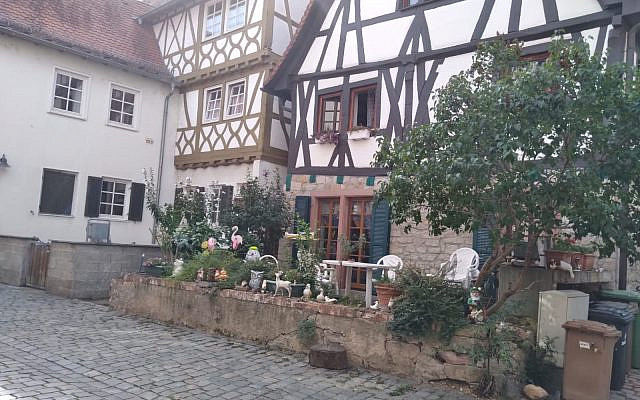 On December 11, 2009, a group of Palestinian Christians, representing a variety of churches and church-related organizations in the Holy Land, issued a call for an end to “occupation of Palestine” by Israel to the World Council of Churches.

They called it the “Kairos Palestine Document” after the original Kairos Document, the theological statement issued in 1985 by a group of mainly black South African theologians based predominantly in Soweto, which challenged the churches’ response to the policies of the apartheid regime after the declaration of a State of Emergency. The word “Kairos” comes from the Greek and means a decisive or opportune moment. Nearly 13 years later, the “moment” for Palestinian and Israeli Christians may not yet have arrived.

The document can be found here: https://www.oikoumene.org/resources/documents/kairos-palestine-document

It includes passages such as “Trying to make the state a religious state, Jewish or Islamic, suffocates the state, confines it within narrow limits, and transforms it into a state that practices discrimination and exclusion, preferring one citizen over another. “ (9.3); “We say that our option as Christians in the face of the Israeli occupation is to resist. Resistance is a right and a duty for the Christian.” (4.2.3) and “we see boycott and disinvestment as tools of non violence for justice, peace and security for all.” (6.3)

One of the most problematic sections says, “Some [Palestinian] political parties followed the way of armed resistance. Israel used this as a pretext to accuse the Palestinians of being terrorists and was able to distort the real nature of the conflict, presenting it as an Israeli war against terror, rather than an Israeli occupation faced by Palestinian legal resistance aiming at ending it.” (1.4)

It is not difficult to understand when reading the selected excerpts why Israel and Jews everywhere rejected the document and refused to give it any credibility or to engage in discussion of it with the authors.  The accusation that calling terrorism “terrorism” was a “pretext” by Israel to avoid the “real nature” of the conflict was painful, especially when coming from Christians, whom Israel might have hoped would condemn terrorism even while sympathising with Palestinian suffering.

The Central Conference of American Rabbis [Reform] wrote on April 15, 2010  that “Careful consideration of what [Kairos Palestine] says and what it does not say, of the history it paints and the history it obfuscates, and of the moral yardstick it applies to Israel yet compromises in the face of Palestinian violence, reveals a morally inconsistent and theologically suspect document that speaks only part of the truth, and not always that…” The American Jewish Committee’s analysis in 2017 said, this appeal reduces the complex, painful history of the Palestinian-Israeli conflict to a single word: “occupation.”

It might seem, therefore, that no paths of dialogue would be opened by such a document and that it could only lead to increased polarisation.

However, this was not entirely true.

The International Council of Christians and Jews, which, since 1947,  has been building bridges between Jews and Christians, responded with a statement from its Executive Committee in June 2010. While noting that it rejects some of the language of the document, the Committee noted that “The genre of the document is a lament.”  The Council described the context in which the document was written as a time when “extreme viewpoints seem to be increasing in popularity, while efforts toward moderation or compromise are rejected as disloyal or naive.” Their response says, “the text … does not descend into rage, hatred, or even ─ as is sadly all too common today ─ empty polemic.”

The ICCJ was not naïve in its response. It listed six serious objections to the text. After listing their concerns, their response concluded with the words:

“We join all those who love the Land called holy by three interrelated religions in being impatient for the day when it truly will be a sign of interreligious cooperation and even love between the nations of Israel and Palestine. Meanwhile, let our impatience be tempered by having ‘mercy upon words’ so that through dialogue mutual understanding may grow.”

On October 23, 2010 the authors of Kairos Palestine sent a letter to the ICCJ responding to its questions and inviting further conversation. Thus began a process into which I entered last week. 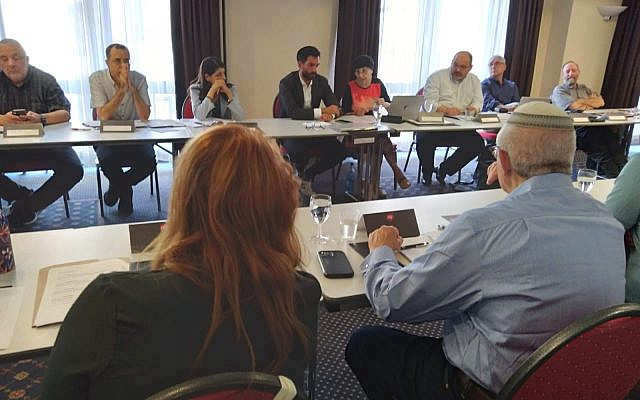 Eleven times so far, under the auspices of the International Council of Christians and Jews, a group of Israeli Jews and Israeli and Palestinian Christians has convened to engage in dialogue, in partnership with German churches who have sponsored the gatherings, too.

I was honoured to receive an invitation to Heppenheim, Germany, when Martin Buber House, the headquarters of the International Council of Christians and Jews, is situated. The invitation spoke about a workshop to discuss the theme of “Borders and Boundaries”. It did not mention Kairos. Indeed, the dialogue has moved far beyond the text of that document. Some of the Israeli Christian participants were signatories to Kairos. Others, not themselves signatories, subscribe completely to its sentiments. There were also those with some reservations. There were German participants who fully support the document and those with reservations or even objections to it. Among the Jewish delegates, there was diversity, too. Everyone was open to talking respectfully and supportively, even while holding fundamentally different positions on Zionism and the State of Israel, on the status of Christians within the Holy Land and on the future.

From the opening session, participants recognised that borders and boundaries are both physical and metaphorical. One of the most damaging type of boundary is that which separates us from positive encounter with the other. This may be imposed from outside or may be internally created. Psychological barriers arise from fear and we did discuss the fear that each group – Jewish and Christian – has of the other. This barrier prevents us from hearing the narrative of the other and therefore from understanding the pain of the other.

The discussion was always respectful even if not always easy. The ground-rules were that our dialogue was in “safe space”. Participants could speak from their hearts and be secure that they would not be shouted down or directly contradicted. We could also trust that nothing said inside the dialogue would be used against us later.

In just three days, we grew in our understanding of each other and developed friendships across communities, across generations and across religion.

Each delegation included a broad age-range, from students to those with many years’ experience behind them. (I am in the latter category.) There were some interesting differences between the older and younger participants, including views about the importance of precise language. In general, the older participants were more sensitive to the nuances of language whereas the younger put the burden on the listener to hear beyond the words.

When the older group hear “apartheid” we hear South Africa, with all that that implies including the lived experience and the dismantling of that inhumane system. The younger simply hear “discrimination,” without a specific historical context.

This realisation helped me to have a little more understanding of the support the Kairos document received. I do not believe it is a helpful document. I believe that the choice of language is extreme and the picture painted of Israel is inaccurate. On the other hand, I see the pain which gave birth to it. I feel and share the frustration.

It was acknowledged by everyone that in this part of the world, the separation between the personal, the religious and the political is impossible: our religious life influences our political life and vice-versa. There was relatively little discussion about a one-state or two-state solution for the Israel-Palestine conflict, with participants preferring to talk about rights, justice, hope and respect. Even the word “peace” was played down, because although it is a religious concept, it has become so politicised that we no longer know how to use the word.

One of the most important pleas from the Christian group was that we not forget Israeli-Palestinian Christians when we talk about the future. They have a complicated identity and do not want to forego any part of it.

My contribution to the discussion was to remind participants that the idea of a nation-state, where lines on a map determine the extent of the sovereignty of a state and the rights and obligations of those inside it, is a Nineteenth Century European idea and may have run its time, in Europe and certainly in the Holy Land. It is incumbent upon us to imagine a different model, where borders and boundaries do not separate the land into strictly divided regions whose peoples are totally cut off from one another and do not interact.

If we love this Land, as we all say we do, then we need a new dream for it – one that is compatible with the holiness of the Land. Holiness cannot be contained within borders; it should not be contained but should emanate outwards. What models can we imagine? What system can we create where justice, respect and hope pervade?

It was noteworthy for me that many of the young people, including Israeli Jewish young people, were pessimistic. They do not place any hope in political leaders. They also do not see an alternative leadership who might make change. Ironically perhaps, some whom you would expect to have been worn down by years of failed dialogue and frustration with the absence of real progress towards a solution, maintained their optimism.

I remain an incurable optimist. My husband and my son served in Tsahal and saw combat. I continue to hope that my grandchildren will serve in a citizen army whose tasks are social welfare. In order for that to happen, we will need to listen and learn, to hear the wisdom of others and to rethink our assumptions. As Rabbi Jonathan Sacks reminded us often, we will need to learn the lesson from the Torah (Exodus 23) and turn our enemies into friends.

One participant expressed the source of my hope when he said, dialogues such as the one we experienced in Heppenheim are like drops of water on a stone: eventually, they can wear down even the hardiest obstacles.

About the Author
A fifth generation Australian, Peta made Aliyah in 2010. She is Senior Fellow of the Kiverstein Institute, Director of Educational Activities for the Elijah Interfaith Institute, secretary of the Jerusalem Rainbow Group for Jewish-Christian Encounter and Dialogue, a co-founder of Praying Together in Jerusalem and a teacher of Torah and Jewish History. She has visited places as exotic as Indonesia and Iceland to participate in and teach inter-religious dialogue. She also broadcasts weekly on SBS radio (Australia) with the latest news from Israel. Her other passions are Scrabble and Israeli folk-dancing.