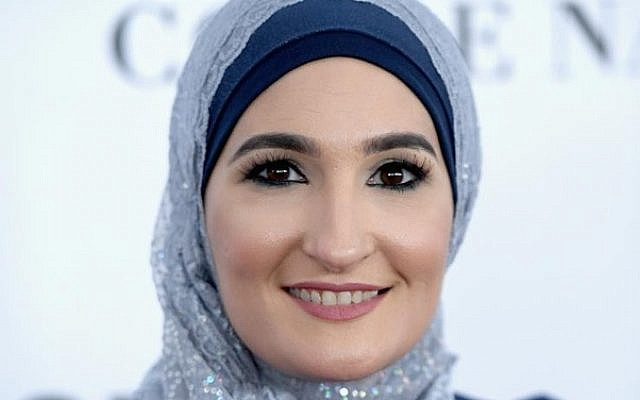 If you’ve spent any measure of time combating antisemitism, you’ve no doubt heard Linda Sarsour’s name at some point. As co-leader of the Women’s March, she tried to position herself as an “ally” of the Jewish community. This, however, was a ruse. With a series of transparently inauthentic token gestures toward us, Sarsour hoped to bridge the gap between progressive opposition to antisemitism (or what she deems “real” antisemitism) and the unrepentant, vulgar, and demagogic anti-Zionism she is known for.

Although thankfully, most saw right through her; and those who didn’t were surprisingly quick to catch on. The backlash against Sarsour and her comrades continued to mount as their connections with Nation of Islam and especially Louis Farrakhan were unearthed, with the Women’s March ultimately refusing to condemn either. Their unwillingness to apologize for this or for their other antisemitic behaviors (which included harassment and verbal abuse of an early Jewish member) led to the downfall of the movement they helped to build, and to their eventual ouster from the leadership positions. Today, Sarsour is broadly and properly recognized as one of most dangerous antisemites in the country, if not the entire world.

She is also by far the most transparent bad faith actor I’ve ever seen – the textbook definition of a demagogue. A modern Joseph Goebbels, if you will.

Goebbels, like Sarsour, was a dangerous and highly skilled antisemitic propagandist. However, unlike Sarsour, Goebbels operated in a climate where open Jew-hatred was 100% acceptable. This meant he could let everything hang out – his hatred, his sickness, his crank theories, his darkest impulses vis a vis Jews were laid bare with no apparent attempt at obfuscation. His every word dripped with contempt for Jews. He needed no politically correct frippery, no winks, no nods. He could let it all hang out.

Sarsour can’t do any of that, at least not yet. And so she tries very hard to be cunning, subverting both the English language and popular progressive commitments to racial equality in pursuit of her fundamentally racist goal.

1. Describing Chuck Schumer, an ethnic Jew, as a “white man” while simultaneously describing to herself as a “woman of color”. An ironic and risible statement in light of this earlier tweet… 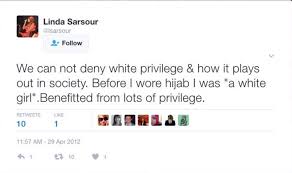 Jews are a Middle Eastern ethnic group, much like Palestinian Arabs are. So why is Linda Sarsour a “PoC” and not Chuck Schumer? Is it her hijab? If that’s the case, it would behoove her to understand that white-passing and whiteness are not the same thing. Schumer could just as easily don a kippah in public, after all.

Alas, a cursory glance at Sarsour’s history is enough to understand what her true motives are. She’s not referring to phenotype, or to his lack of religious/cultural adornments. She is trying to further the impression that American Ashkenazi Jews like Schumer are “not Middle Easterners”. And if we’re not Middle Easterners, then it’s a given that we have no valid claim to the land of Israel. It is an anti-Zionist message conveyed by stealth.

Furthermore, as I’ve covered in previous writings, calling us “white” is an insidious act of erasure that seeks to trivialize antisemitism and effectively sideline us out of the conversation on racism and privilege.

Sarsour knows all of this. That’s why she does it.

2. Accusing Zionists of having “divided loyalties”. At least 90% of American Jews alone (to say nothing of Israelis) are Zionists, so the fact that she’s not avowedly targeting “ALL” Jews is neither here nor there. Forgive me if I fail to see a substantial difference between someone who wants all of us dead, and someone who merely wants 90% of us dead.

3. Gaslighting Jewish critics, as she did here…

“Dont (sic]) you get it: we can wake up in the morning say ‘good morning’ and be labeled antisemitic. It’s not about what we say, it’s who we are. It’s based on orientalist tropes that deem Muslims and Arabs inherently antisemitic. It’s racist. It’s bigoted. It’s finally being exposed.”

4. Oh yeah, calling Jewish people “Orientalists”. Anyone familiar with what the term “Orientalist” means, especially in an anti-racist context, will recognize how insidious this application is.

In plain terms, an Orientalist is a foreigner – typically of European extraction – whose worldview is couched in Eurocentrism and degrading stereotypes/exotification of “the East”. This is yet another of her subtle attempts at disassociating and disenfranchising us from our indigenous roots. She is telling her audience that we are not an authentic part of the region and therefore do not “belong” there (refer back to number 1).

6. Arguing that antisemitism isn’t “systemic”. Not only is this a bullshit claim, it’s yet another attempt on her part to trivialize antisemitism, thereby reducing the urge to address it.

But there have also been occasions wherein she let her true colors show.

To give some examples…

1. Throwing a public temper tantrum after the Black-Jewish Caucus was announced.

3. Commenting on an antisemitic tweet that told Jews their “real” homeland is Poland and Brooklyn. Instead of condemning it, you said “hey, hey leave Brooklyn out of this”.

As you can see, her list of offenses is quite long. And that brings me to this latest incident, wherein she once again bares her fangs to a packed crowd of “anti-Zionist, not antisemite” antisemites. Only this time, she fully removes the mask instead of letting us have a small peak underneath.

Her ludicrous claim that Israel was “built on Jewish supremacy” – a right-wing antisemitic trope and a favorite of David Duke himself – drew considerable ire from Jews and even from progressives. And for good reason: it is Archie Bunker-level ignorant bigot-speak, more so than anything else she’s ever done. In response, she quickly took the video down and made a weak apology (in actuality, just a long list of lame, dishonest excuses) on her Twitter timeline. 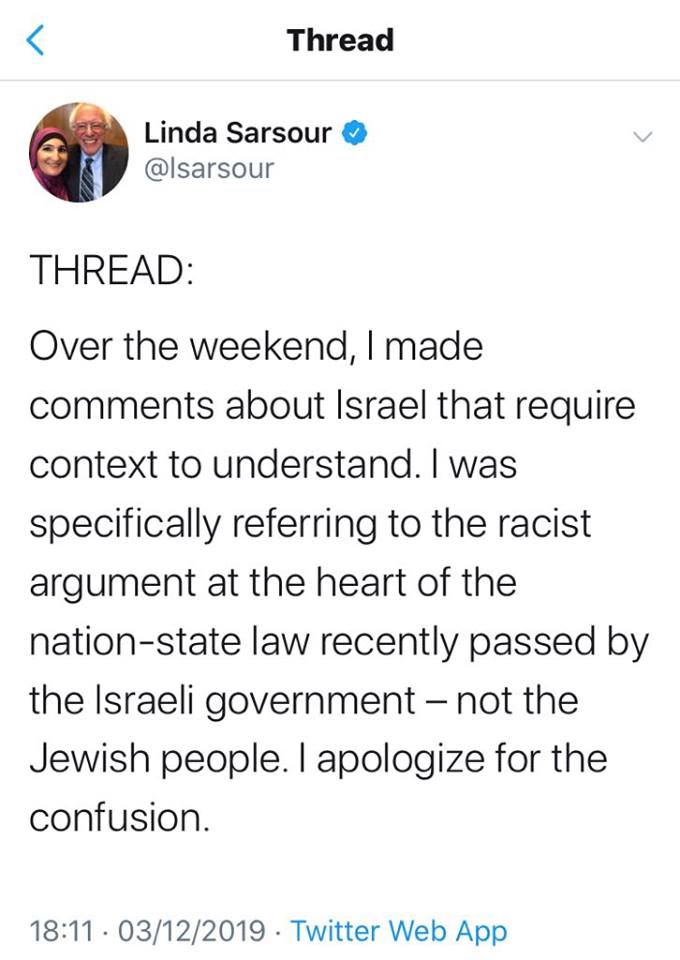 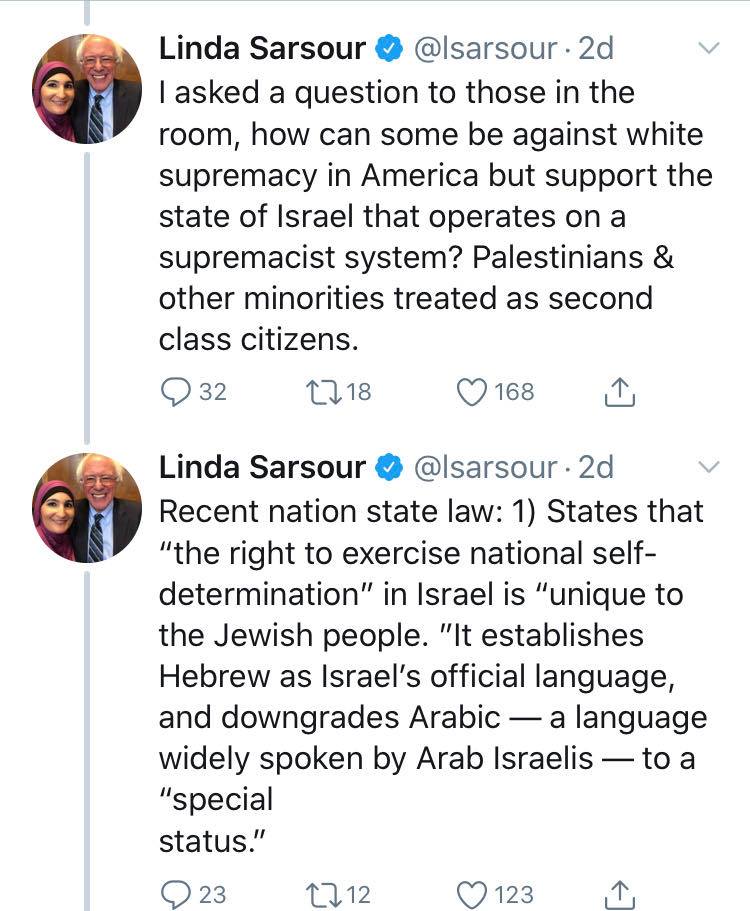 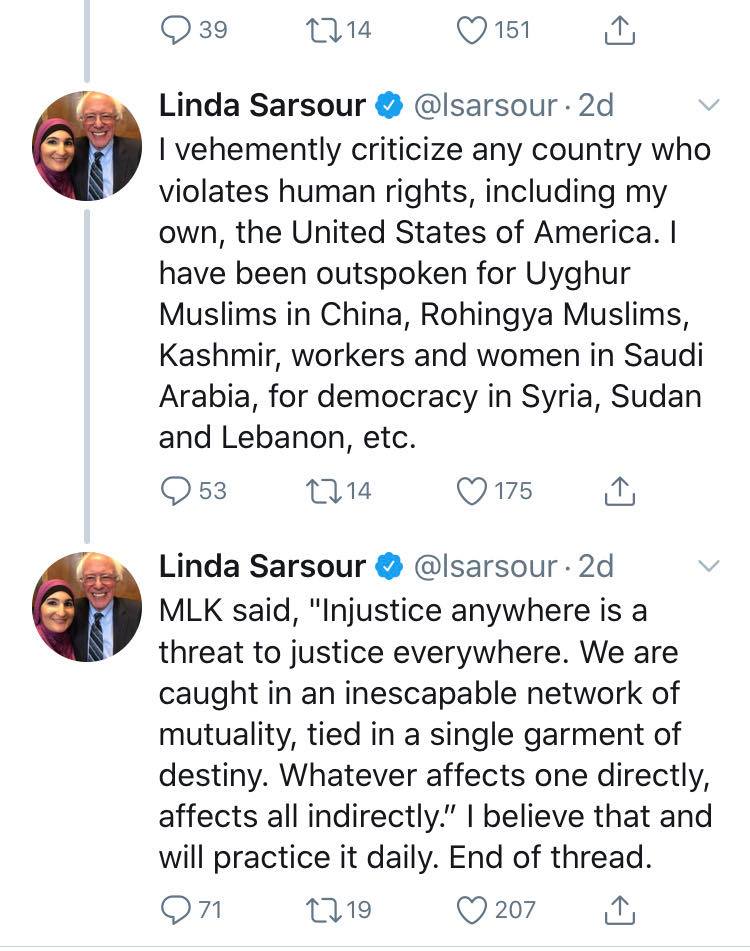 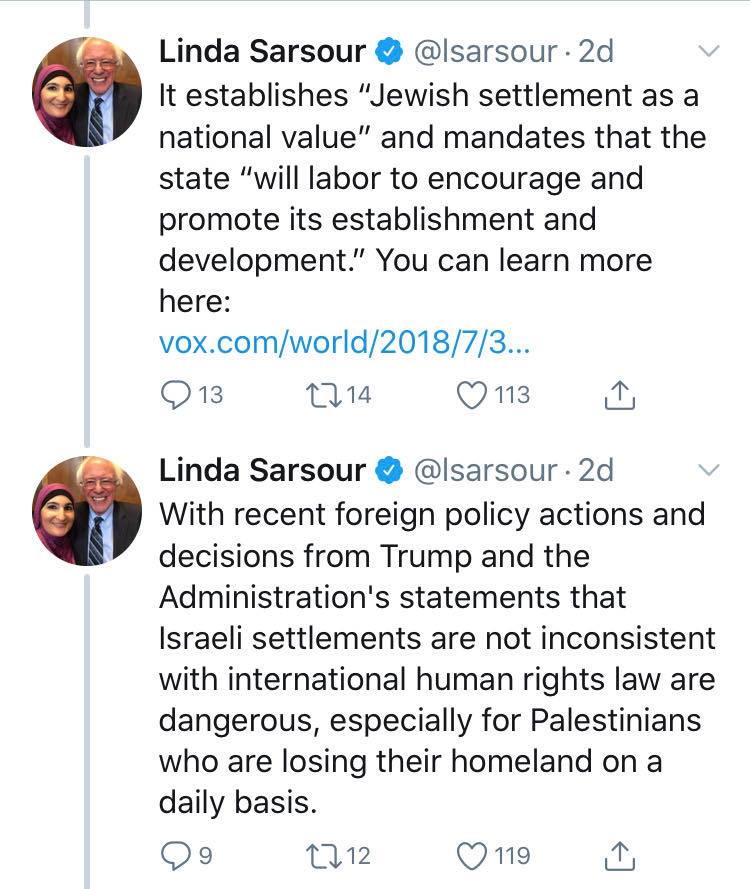 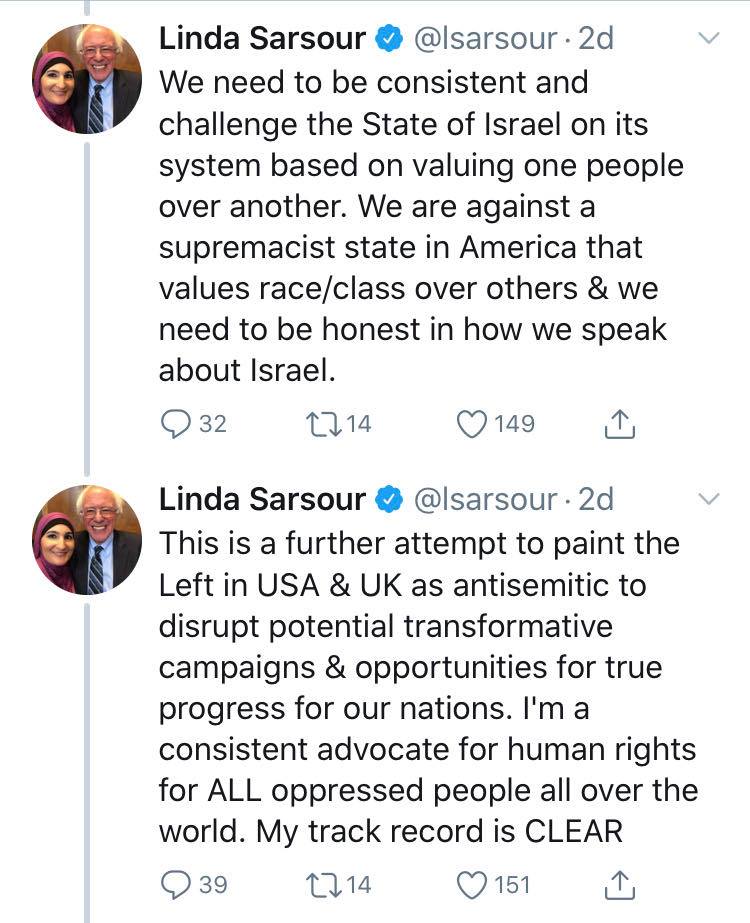 There is a lot to unpack here.

For one, there is absolutely nothing supremacist about an exiled indigenous people returning to their homeland. Indigenous rights is not supremacism. She must be thinking of pan-Arabism, an ideology that WAS built on supremacism, expansionism, and land theft. That is the ideology Sarsour herself champions.

Furthermore, many Zionists had a positive view of Arabs. Einstein described them as our “brethren” (referring to our common Semitic/Near Eastern origin). Chaim Weizmann was able to win over the heart of Iraqi King Faisal himself because he believed, as Weizmann did, that Arabs and Jews are kin – equally native to the region. He understood that Jews are not “guests” in the Middle East, but natives returning home after centuries of exile. Ben-Gurion, Herzl, Jabotinsky (the founding father of right-wing Zionism), etc were all sympathetic to the plight of Arabs under Ottoman rule.

Second, she claims that her comments pertained to the nation-state law, not with the State of Israel. This is obviously a lie. She said, at her speech, that Israel was BUILT on supremacy. BUILT. As in, she believes supremacy is integral to Zionist movement. This is yet another example of Sarsour’s dishonesty.

Third, comparing victims of white supremacy (i.e. Jews) to white supremacists themselves is absolutely disgusting, and only a half-step removed from calling us “Nazis”.

Lastly, it is ironic that she tries to invoke Martin Luther King’s name in her venomous screed, considering MLK was a committed Zionist.

Linda Sarsour is not an ally to the Jewish people. She is not anti-racist. She is not even a progressive. She is a viper, and it is incumbent on anyone who belongs to any of the above groups to disassociate from her at once.