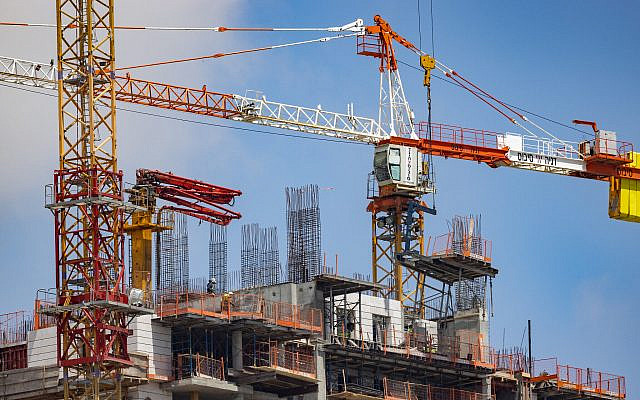 Construction site for a new skyscraper in Jerusalem on April 26, 2021. (Nati Shohat/ Flash90)

Armed with the largest budget in the city’s history, Jerusalem mayor Moshe Lion is leading Jerusalem through an unprecedented scale of physical change. Tens of thousands of new apartments have been approved or on their way to approval, some 10,000 are proposed for the Atarot area alone, along with new hotels, commercial and industrial uses. Dozens of new roads are under construction (Route 16 through the Jerusalem Forest — megalomania), new light-rail lines underway.

Given the city’s increasing population, the need for increased urban density is obvious, the scarcity of available land well-known. Public housing that has aged needs to be built anew, replaced by modern buildings of greater capacity. The problem is that most of this high-speed building is responding mainly to the temporary demands of the real-estate market and not grounded in sustainable values, such as respect for the existing physical and natural environment, human scale, and aesthetic considerations, which are entirely ignored. The utter lack of comprehensive, long-term planning and urban design has led to appalling so-called “urban renewal” monstrosities such as that for the Kiryat Menachem neighborhood. Building well at this gargantuan scale demands high talent, which is nowhere in sight. Unintegrated, lacking diversity, and oblivious to their neighbors, the great majority of these projects are anti-social, sterile, and dull.

In selecting Yoel Even, a civil engineer, as his city engineer (a misnomer remnant of the British Mandate period), as his main adviser on architecture, urban design, and planning, Lion, in effect, gave up on his professional planning team. Major decisions on land use, transportation, building, and open space are today influenced by a man who does not have the slightest knowledge of these subjects.

Assistant Mayor and Chairman of the Local Planning and Building Committee Eliezer Rauchberger has become known for his marathon meetings. In a recent interview, Rauchberger proudly presented the number of building permits his committee had issued. Numbers, cold statistics seem to be all he knows.

Intent on fast-tracking their plans, the municipality has, whenever possible, resorted to creating “policy plans,” allowing it to build with zero transparency, thereby preventing public involvement and participation. The Beit Hakerem Master Plan, which I find to be a clear case of malpractice, was never checked properly by the municipality over 13 years, and was magically transformed into a policy plan. State Comptroller Matanyhu Engelman has strongly criticized these plans, stating that they are no substitute for statutory town planning schemes, which allow for public review.

A key element in the municipality’s present plans calls for 30-story towers to be constructed along all existing and proposed light-rail lines. As free-standing towers are thick columns, set back from the street, the street will become lifeless. Interrupting the continuity of the street, they will look like a man who has lost half his teeth.

Accessing parking to properties adjacent to light-rail lines is both difficult and dangerous, at times necessitating crossing the rails. The example of Herzl Boulevard in the Beit Hakerem neighborhood will suffice. Most properties adjacent to the existing light-rail line are not accessible at all. The road behind, Hameshorret Rachel, is just nine meters (nearly 30 feet) wide and already clogged up. And too, more private cars are being sold today than ever before. No one can be sure that people will give up their cars once the new light-rail lines, which are being built at enormous public expense, are in place. Unlike the existing Red Line, which has 50 bus lines tied to it, the new lines presently being constructed may prove unhelpful, economically.

And while destroying gentrified public housing — namely, replacing these projects with buildings of larger volume — is eminently reasonable, the city’s policy of building towers in their place may well prove extremely destructive.

A case in point: the existing public housing along Hatomer Street in Jerusalem’s Yefe Nof neighborhood consists of two buildings that are four or five stories in height, 60-80 meters (some 197-262 feet) long, wonderfully define the adjacent and recently renewed Hatomer Park opposite. Towers here would most certainly destroy the entire character of the area. Proposed instead are new and modern eight-story buildings, similar in length to the existing buildings, but broken up by vertical circulation elements, their terraces responding to the park. Urban design.

Moshe Lion’s New Jerusalem has a most serious problem at the top. Not one of the city’s four major decision-makers has any previous education and experience in these important matters. Lion studied economics, accountancy, and law. Assistant Mayor Eliezer Rauchberger was a journalist for a Haredi newspaper, CE Yoel Even, a civil engineer. District Committee Chairman Amir Shaked is a lawyer. The teams serving them have proved absolutely incompetent as well. When all is in place, we will find that Lion’s New Jerusalem has irresponsibly destroyed the historic character and skyline of the Eternal City.

It is high time for committed and gifted design professionals to enter politics and take their place.