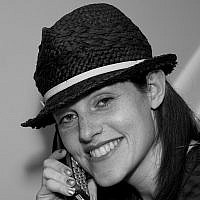 The Blogs
Rochelle Garfield
Apply for a Blog
Advertisement
Please note that the posts on The Blogs are contributed by third parties. The opinions, facts and any media content in them are presented solely by the authors, and neither The Times of Israel nor its partners assume any responsibility for them. Please contact us in case of abuse. In case of abuse,
Report this post.

Those words have been ringing in my ears for the past week.  I couldn’t stop thinking about that awful meeting. He was 15, a boy whose life hadn’t been easy. He had lost his home and his grandmother to a natural disaster when he was 3. Relocated to a new city a few years later. Lived in overwhelming poverty. Had a very difficult family situation. Was a smart kid but had significant learning disabilities. Suffered from anxiety and depression. Now here he was.  Failing six out of eight classes as a 10th grade student in a public school. Protocol said that we had to have a meeting with teachers, administrators, special ed team, parent and student to discuss the failures. As the boy’s speech therapist, I was invited to the meeting.

The meeting went from bad to worse.  We were a large group sitting around a small table.  There were two administrators, a case manager, his mother, his teacher, a special ed teacher, me (the speech therapist) and the student himself.  The meeting started with the teacher smugly announcing to the group that she really cares about the student and she’s tried to help him, but he’s not interested in getting help. He has no motivation, won’t do the work she gives and she’s sure he wants to fail. “Really?” I thought to myself, sarcasm dripping from my thoughts, “Because that’s what most people want — to be a failure.” An administrator then jumped in, asking the student if he heard what the teacher just said (because maybe he hadn’t heard in this silent room with the teacher talking loudly, directly at him?!)  This was followed by a barrage of criticism from his mother, “Do you hear what they are all saying?!!!” There it was again — wondering if he can hear. “You’re going to end up in jail!  And I won’t visit you!!!  This is enough. You are going to start doing your work. You are going to hand in your assignments. I will not put up with this anymore!” All eyes were on the boy. I could see the anger growing inside him. I was feeling angry, too.

The case manager then turned to the student and said, “Legally you have to participate in this meeting. What do you want to add?  We will put it in the meeting minutes.” The boy looked directly at his mother and said, “You don’t listen to me! Not now, not ever!” Then he turned away from everyone, folded his arms and I knew we had lost him. The case manager jotted these words down. Etched into the minutes of the meeting, in his file forever. His mother’s nostrils began to flare. She began to scream back, “You think I don’t listen?!  I listen when you lie to me and tell me you did your homework and you didn’t. I listen to you when you talk back to me.” A smart administrator quickly stood up, suggested we take a short break, and took the boy out of the room to cool down.

At this point I was feeling so angry — I felt humiliated for the student and so upset at the mother who wouldn’t defend him. But as the student left the room, the mother began to cry. Cries turned into sobs.  And the anger I was feeling began to subside. Through her sobs she told all of us in the room that all she wanted was for her son was to make it out of the awful life they lived. She didn’t want him to end up homeless or in jail or suffering the way she had.  She wanted to him to graduate high school. She wanted him to be able to settle into a life without financial strain. But she didn’t know how to do it!  She took away electronics, she grounded him, she commanded him to do his work! She didn’t let him play football unless his grades were good. But it wasn’t working!  She was overwhelmed and panicked about his future. After that, I felt more empathy for the mother. She needed guidance just as much as her son. The boy came back in the room.  The special ed teacher and I were able to pull out the student’s evaluation and show everyone in the room how difficult learning was for him, how hard he was working and how he needed more support.  The tone of the meeting changed somewhat.

But for days after the meeting, I just couldn’t stop thinking about what the boy had said. He had given his mother the answer. She was trying and trying to force her son to succeed.  But she was missing the most important part. She wasn’t listening to HIM. She wasn’t letting him tell her what his struggles were. There it was. You can’t force someone to succeed. That’s not the way it works…

Pesach is approaching and my mind began to wander to the seder.  For a few thousand years, we have used the seder to educate the next generation — where we come from, what our mission is, why this mission is so important to maintain.  Education is the greatest defender of our people. Our greatest secret. We have always placed the highest priority on education, schools, and the beis medrash. It is what has sustained us. But it is not just the fact that we value learning- it is how we learn.

The seder is interactive and is meant to be a response to the children who will ask.

“And when your children ask you, ‘What does this ceremony mean to you?’ then tell them, ‘It is the Passover sacrifice to the Lord, who passed over the houses of the Israelites in Egypt and spared our homes when He struck down the Egyptians.’ (Ex. 12:26-27)

In the future, when your son asks you, “What is the meaning of the stipulations, decrees and laws the Lord our God has commanded you?” tell him: “We were slaves of Pharaoh in Egypt, but the Lord brought us out of Egypt with a mighty hand.” (Deut. 6:20-21)

We pass down our values, we educate our children, NOT with an authoritarian forcefulness.  But by getting our children to question, to search and then to seek answers.

The seder makes a clear point in telling us about the four sons.  About understanding the differences. About responding according to these differences. Education isn’t about deciding what you want to teach and then forcing it on an audience. It’s about learning who your audience is, LISTENING to them and then responding to what they are seeking, what they need.

When we want to give over our most important values, the things we hold most dear, we must remember the lesson of the seder- we must first LISTEN before we can answer.

About the Author
Rochelle Garfield lives in Houston, Texas with her husband and six kids. She works as an SLP in a high school and as a freelance writer in her free time.
Comments