President Nausėda of Lithuania has announced that he will NOT attend the World Holocaust Forum on January 23. He objects to Russia being a speaker at the Forum, while he is not invited to speak. Lithuania accuses Russia of distorting history, so let us examine Lithuania.

Christmas 2019 presented bountiful gifts for Lithuanian fascists and Holocaust deniers. The Lithuanian Government presented a false report that Jonas Noreika had not murdered Jews; rather, he was a rescuer. It published this fairy tale through Baltic News Service. The story is as credible as Santa coming down a chimney with gifts.

Father Jonas Borevičius was a friend of the Noreika family in Lithuania while Jonas Noreika was perpetrating his war crimes. When Soviets entered Lithuania and put a stop to the murders of Jews, Noreika’s wife, sister, and daughter fled. USA declined them visas, so instead, they went to Argentina because Noreika’s older brother Stasys was living there on a farm. (Argentina was also openly accepting Holocaust perpetrators and their families at the close of WWII.) The Noreika’s remained in Argentina for seven years until Father Borevičius was able to assist them in obtaining visas to enter USA, possibly even as their immigration sponsor. He was a devoted friend to Mrs. Noreika and accompanied her to Lithuanian social events in Chicago.

Jonas Noreika was exposed as a war criminal in Germany in 1984. Lithuanians clamored to protect each other and ensure families were not deported back to Lithuania (then occupied by the Soviet Union) as war criminals. In 1986, Father Borevičius was interviewed regarding a different Holocaust perpetrator from Lithuania, and during his testimony offered unsolicited statements that Noreika rescued Jews. The Lithuanian Government found this testimony in 2019, altered it, added a few amendments of its own, extrapolated it, heaped on a large dose of creative writing and magically declared that Noreika was in fact, a rescuer of Jews!

They took disparate unrelated events from Father Borevičius’s testimony and tied them together. They falsified facts and constructed their own testimonies which they then used to support their positions. Where the Government lacked their own creativity, they took SS propaganda and used that as “evidence” to support their thesis. They did not bother to fact check, did not look for corroborating evidence, did not seek out those Noreika supposedly rescued, did not look at the context of the period, they blatantly and crudely re-wrote Lithuanian Holocaust history for their own purposes.

The author of this fairy tale is employed by the government to assist in public relations. He later admitted this revisionism was just his “opinion,” but the Government of Lithuania published it as a factual piece of research, and certified it as accurate.

This is Holocaust denial, officially published by a European Union Government that is a member of NATO.

Lithuania objects to Russia altering history, but has no problem in doing it themselves. 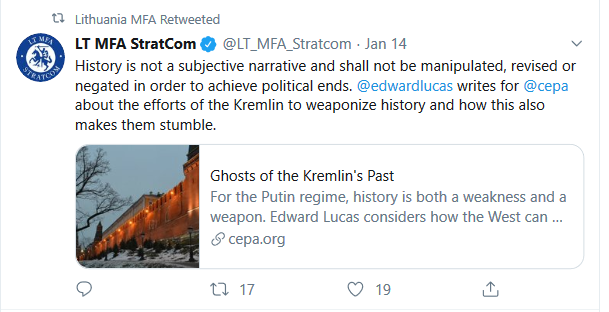 The International Commission for Assessing the Crimes of the Nazi and Soviet Occupational Regimes in Lithuania (academics doing research in the field of the Lithuanian Holocaust) issued a statement about Noreika on March 10, 2019:  “On August 22, 1941, and on September 10, 1941, Jonas Noreika, following the directives of Šiauliai military district Hans Gewecke appointed by the Germans, issued orders on removing the Jews of the military district to ghettos and on the confiscation of their property … Almost all of the victims arrested under these orders were later murdered. This is the historical reality, based on indisputable documented proof. If this is not participation in the genocide of Jews who were Lithuanian citizens, then what is?”

“We cannot understand why the [Center] is defending an openly racist and fascist political group, the Lithuanian Nationalist Party, whose members who served in police battalions were among the most active persecutors and murderers of Jews.”

The government has finally shown how far from truth it will veer in order to rewrite an inconvenient national history.

The new data about Noreika rescuing Jews was disseminated to the public at the same time as the Director of the Genocide Center falsely claimed that a court had found her Noreika research was according to “scientific methodology”. Representatives of the Lithuanian government lie about history compulsively and without hesitation. 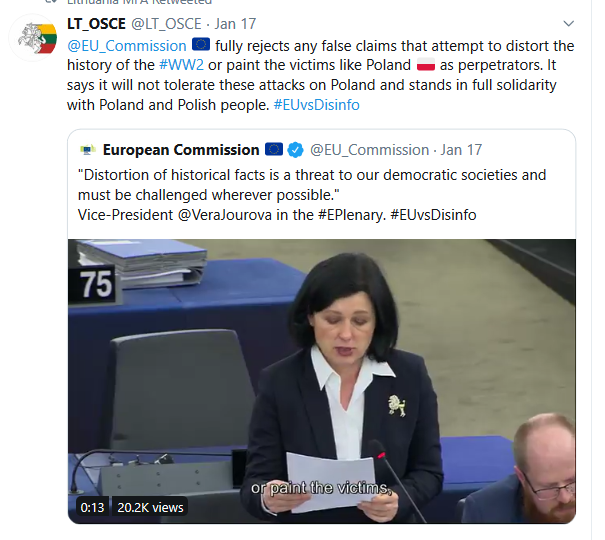 Winston Churchill said: “A nation that forgets its past has no future”. Lithuania has not forgotten its past, they have rewritten it. If Lithuania wants to be a trustworthy ally that others will willingly defend from the lies spread by its enemies, it shouldn’t be engaging in its own form of lying and dishonesty.