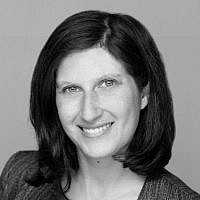 The Blogs
Erin Bistricer
Senior Staff Attorney , Shalom Task Force: Sarah's Voice
Apply for a Blog
Please note that the posts on The Blogs are contributed by third parties. The opinions, facts and any media content in them are presented solely by the authors, and neither The Times of Israel nor its partners assume any responsibility for them. Please contact us in case of abuse. In case of abuse,
Report this post.

Victims of domestic abuse face an uphill battle in any legal arena. They have the burden of establishing that abuse occurred in a system that is unfamiliar and not always understanding of their experience.  Jewish victims have the additional complication to prove their case in multiple systems. On top of the secular court, which COVID has made even more complicated to maneuver, Jewish victims also need to navigate the Beit Din (Jewish Court) to receive their Get (Jewish Divorce). According to halacha (Jewish law), only the man can grant the Get. When a man refuses to give his wife the Get, it makes his wife an agunah (a chained woman)?

One question attorneys at Sarah’s Voice, Shalom Task Force’s legal department, constantly hear from community members is “What can be legally done to secure a woman her Get?” The short answer: not much. Let us delve deeper in the long answer.[1]

In New York, the Courts cannot order a recalcitrant spouse to give a Get because civil law does not allow a court to interfere with religious matters. Moreover, forcing a recalcitrant spouse to give a Get is a violation of halacha.  However, the New York Legislature and the Courts have long been aware of the agunah issue.  Therefore, two major pieces of law were passed to encourage, not to force, the giving of a Get.

The first law requires all those who start a civil divorce (“Plaintiff”) to “remove barriers” to their spouse’s remarriage.  In cases where the parties are Jewish, this means that if the husband starts a divorce in the civil court, he must also provide his wife with a Get in the religious court prior to a divorce being finalized in the civil court.  In essence, a spouse cannot have the benefit of the civil divorce if he denies his spouse the opportunity to remarry religiously.

The second law allows the court to consider Get refusal when determining financial issues, such as spousal support (in the past referred to as “alimony”) and the distribution of assets and debts (“equitable distribution”). This enables the court to consider the financial ramifications that the chained party experiences.  Although the judge cannot order a recalcitrant spouse to give the Get, the judge can say that if it is not given, there will literally be a price to pay.  The choice is left to the Get refuser.

For example, the judge considers that the chained spouse cannot remarry and establish a dual income household.  The judge can also order the husband to pay spousal support for a longer period since he is forcing his wife to remain married to him.  Similarly, a judge could order an imbalanced distribution of assets so that the wife receives a larger portion of the marital assets than she otherwise would have.

While these laws made tremendous strides to combat the imbalance of power between a recalcitrant spouse and the agunah, these laws are limited.  The first does not protect agunot when they need to initiate filing for a civil divorce.  The second is not helpful where there is no money or assets to distribute.  A party cannot be ordered to pay if there is no money to go around.

With the knowledge of the limits of the civil law, it is important pay attention to the impact that Get refusal has on an agunah litigating in civil court.  A pattern emerges in cases where the agunah has started the civil divorce and is seeking to enforce her legal rights, whether it is to argue what she thinks is best for the children, or to seek child support.  The threat that the Get will be withheld if the abusive party does not get his way is ever lingering over her head. A common thought I hear from clients is “I will never receive my Get if I ask for child support” or “Even though I do not feel safe from my husband, I rather withdraw my right to pursue an order of protection and figure out another way to protect myself from my abusive spouse if that will help me get my Get.”

The threat of Get refusal is not always explicit, but it is always present, filtering into every decision the wife makes. It is felt in every conversation, every decision, every appearance, and every court filing.  Sarah’s Voice attorneys ask for the Get in all cases and the common response from the opposition is ‘wait until the civil divorce is done’.

Many may view the giving of a get before the end of the case as premature because they would question why it makes sense to issue a divorce in the middle of the divorce. To correct that there needs to be systemic change and a shift in communal thinking. In the same way that we encourage people to do a prenuptial agreement to protect their friends, we should encourage all parties in a divorce to give the Get at the onset of the matter to protect the few who will be coerced by it.

Too often, it is argued that the delayed timing of the Get is necessary to ensure that the wife provides access to the children.  Too often, I hear the refrain “there are two sides to every story.”  When it comes to Get abuse there are no two sides. There is an implicit acceptance in these arguments that the Get is needed to keep the woman in line.

While the husband can always seek a remedy from the court if he feels that his wife acts in bad faith, the wife must always consider whether she is risking her freedom. Meanwhile, she has no “leverage” if the husband acts in bad faith.  The Get is a one-sided tool for abusers to utilize as they exert power over their spouse post separation.

The reality is that the Get is being used to prevent the wife from telling her side.  It is a form of coercive control.  It is domestic abuse.  The Get was never intended by religious law to be used as a weapon or a “check” on a woman and yet that is the agunah experience.

The parties are not on level playing fields.  On one side, the husband can argue the merits of his claims before the judge and utilize an implicit threat to prevent his wife from freeing herself religiously if he does not like the outcome.  On the other side, the wife can argue the merits of her claims but only if she feels secure that her husband will not punish her if the judge agrees with her.

The nature of Get refusal, that it is a tactic that can only be utilized by one side, exposes the fallacy of the “two sides” argument.  This is a weapon predominantly used by a man, and yet recalcitrant spouses claim that it can be justified because a woman acts in bad faith? When arguing this, there is no balance. What is the wife’s remedy when the husband acts in bad faith? Can forcing a spouse to remain married to a partner they wish to divorce ever be considered an appropriate remedy?

The coercive nature of the abuser’s actions may in this context be cloaked in the language of civil justice, be it fighting for more access to the children or paying less support.  However, underneath the rhetoric, there is the common dynamic of domestic violence: if you do not do as I wish, I will punish you and you cannot escape.

How does the Beit Din factor in?  The answer is complex.  Unfortunately, many women feel that they are denied the opportunity of having their Get heard by a Beit Din that they feel comfortable with.  For a rabbinical court to become involved, the parties first must agree on the Beit Din.  Often the parties cannot agree on the forum or unreasonable and unethical demands are placed on the wife as a price for her Get.  For these women, the Beit Din is not a source of help.   Without adjudication before a Beit Din, many agunot never receive a seruv (a Beit Din contempt order) against their husband.  These women privately suffer and may not be comfortable taking further action because of countless considerations, whether it be religious, personal, or financial.  Yet, they deserve their freedom as much as anyone else.  They are the most silent of cases, but we must hear them too.

When a woman does succeed in appearing before a Beit Din and the husband refuses to abide by the ruling of the dayanim (judges) to give a Get, a seruv is issued. However, the seruv is not useful and holds no weight without communal support for the wife and pressure to enforce the seruv. In these cases, the dayanim have done their part and it is up to the community to support the enforcement.  This too requires a shift in communal thinking and practice.

The experience of being an agunah is a personalized one. Every woman will have a different background and perception about her situation.  What we can do as a community is support these women in their stories, no matter what their journey entailed.  To ask whether they first tried offering “fair” terms misses the point.  To think otherwise not only permits the arbitrary chaining of a woman to her husband but allows a remedy to men that is not available to women.  It reinforces the concepts of inequity and coercion.

Shalom Task Force supports the immediate giving of a Get upon request and without conditions.  Only then can we combat this injustice in our community.

Please join us for a webinar on April 21, 2021 at 9pm that will explore the overlap between the Get and the civil courts.  For more information, please visit our website at https://shalomtaskforce.org/litigating-while-chained.

[1] A brief note on this article’s scope: while it is possible for a woman to refuse a Get, my experience has involved cases where the husband is the refusing party. Further, the social ramifications of a woman refusing a Get and the potential solutions available to the man by halacha are different.  This article therefore focuses on situations involving a recalcitrant husband, though the suffering caused by Get refusal transcends gender.   Moreover, as it is halachically impermissible for a couple to continue residing together once a Get is received, this article is also limited to cases where the parties have already separated.

About the Author
Erin Bistricer, ESQ, is a Senior Staff Attorney for Sarah's Voice, a legal project of Shalom Task Force that provides free legal services to New York domestic violence victim-survivors from the Orthodox Jewish community. Erin is passionate about bringing awareness of domestic abuse related issues to the court system. Erin has litigated complex order of protection, custody, support, divorce, and immigration cases. Her work often involves the intersection between the civil courts and the rabbinical courts (Beth Dins). She has helped numerous callers navigate the differences between these two forums and has strategized and advocated for clients on issues relating to the religious divorce (“Get”). If you are interested in speaking with Sarah's Voice, please contact us by calling or texting 347-592-2124 or emailing us at legalintake@shalomtaskforce.org.
Comments