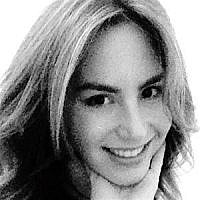 The Blogs
Hila Karmi
Apply for a Blog
Please note that the posts on The Blogs are contributed by third parties. The opinions, facts and any media content in them are presented solely by the authors, and neither The Times of Israel nor its partners assume any responsibility for them. Please contact us in case of abuse. In case of abuse,
Report this post.

I don’t bother to stretch my legs before they lengthen their stride and I bolt down the palm tree lined, freshly laid boardwalk, passed the touristic restaurants. it may be my imagination but there seem to be more runners out tonight than usual, despite the thick cloud of desert dust hanging in the air. The wind blows in from the Mediterranean, the foam of the waves on the breakers the only indicator separating sea and sky. My lungs take a moment to adjust. I have asthma. When I was in high school they gave me an inhaler. I hated the way it would make my hands shake so I began running because I heard it would help my lungs expand. If I stop, I’ll have an asthma attack. So I don’t stop.

I pass a group of chinese tourists pointing at a statue. ahead the lights of the ancient city of Jaffa are blurrier than usual. about 2km later I turn back around, fighting against the wind. The runners passing me come in all shapes and sizes, they’re also breathing in the heavy air.

Taking the slope down hill I naturally speed up. A random guy running alongside me throws me a glance, I smile, noticing our pace has matched for several seconds. We spontaneously break into a race, all the way towards the stairs, where we high-five and part ways. He continues towards the cliffside, I take the stairs in twos just like Mihail Sebastian did. I pass by the strip club and don’t take off my head phones, I don’t even lower the volume, unlike the way I’d feel in nyc, I’m sure I’m safe. As soon as the thought passes over me, I feel guilty.
Just this morning a young man from the West Bank stabbed four civilians not 50m from where I am. It’s amazing what people can get used to.

At the bar near my house a crowd of young people, city slicked, some of them still with their laptop bags slung over their shoulders, sit and listen to a Holocaust survivor tell his story. The bar is packed. The barstools full until the curb of the sidewalk. Last year I was one of them. After all, today is the Israeli Holocaust remembrance day, celebrated to commemorate the Warsaw ghetto uprising. To celebrate defiance.

In this paradise I’ve called home for the last 3 years and 2 months roughly 50% of the population is a result of those who lived defiantly, against the odds, against hatred. And we continue to build, advance, and grow, a blip on the map but the main event of world politics, the kid everyone loves to hate. We’re living defiantly.

As I unlock my front door I can’t help but think: if we are what they say we are – the ones controlling the banks, the media, and even Hollywood, it’s only as a result of 3,000 years of Social Darwinism. Hatred has bred our strength. We’re only as good as you’ve made us.

About the Author
Hila Karmi holds a BA in English and an MSc. in Environmental Science. She has written many things.
Comments