I was born and lived a lot of my life in New York City. Museums — and the Statue of Liberty and the Empire State Building, etc — were things that other people traveled the world to see, but, for me, they were always things I could put off until the “next weekend” to go to. Sometimes, the “next weekend“ ended up being 10 or 20 years down the line!

But when you live in a tiny country like Israel, you run out of world-class museums real quick. You start to dream about going to Amsterdam, only five hours away, just for a day or two to go to the Van Gogh museum. Even the country of your birth – America! – Starts to morph from a place to live into a collection of museums and other tourist spots.

Or, at least that’s the way it’s been for me the last 10 days or so. I came to the States for a 2 1/2 week trip, a combination of business and going to some bat mitzvahs (pleasure?).

But quickly, as I planned my trip, I started to salivate at the idea of going to museums. America, I thought, what a great country for museums! 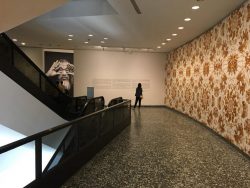 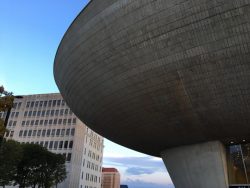 So, when I was in DC — the museums are even free! — I got to the new National African-American Museum and an old favorite of mine from childhood, the Hirshhorn. And in Albany I took the time to see one of the wackiest architectural features in New York state – the Egg! And in nearby Western mass I took an impressionist masters at the Clark Institute, and large pieces of contemporary art at MASS MoCA.

The highlight was definitely the African-American museum, which was a lot more like going to synagogue on the high holidays then anything else – a truly holy experience amid a community also finding it holy. I felt honored that the African American community would let me in to share their holy space with them.

I really enjoyed the Clark. I spent a whole hour just in the one main gallery, sitting on different benches and contemplating the Impressionist Renoir’s and Monet’s. These works seemed so appropriate to the physical setting, especially in the fall in the Berkshire hills. The beauty of both the paintings and those hills is so often not in anything spectacular or dramatic, but in the same kind of subtle, misty, colorful depth. 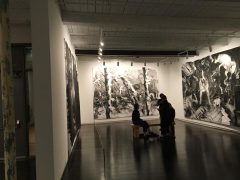 And Laurie Anderson’s work just “down the street” at MASS MoCA in North Adams was truly mind blowing. I could’ve spent an entire day in just that one room. It’s something that I think kind of has to be seen, especially if, like me, 9/11 was a major part of your life.

It is so great to be able to see the United States this way – to see it with fresh eyes as a tourist, as a place of opportunity for visiting the most interesting spots. It’s one small additional gift of having made Aliyah, that I am able to appreciate the United States in this way.

What is hard to appreciate, however, about the country of my birth is the guns and the seemingly completely senseless violence. Just an hour or so before I started to write these words, I heard about yet another terrible, terrible shooting, this time in a church outside San Antonio.

I pray for this country, to see the light. And to become a place that I can think of more for its museums than for the blood that seems to be spilled almost endlessly in mass shootings.

About the Author
Alan Abrams is a spiritual care educator who made Aliyah in 2014. He and his wife live in Jerusalem with their two "sabra" children. Alan is the founder of HavLi and the HaKen Institute, spiritual care education and research centers based in Jerusalem. A rabbi, Alan received a PhD in May 2019 from NYU for his dissertation on the theology of pastoral care. He was a business journalist in his first career.
Comments
Advertisement