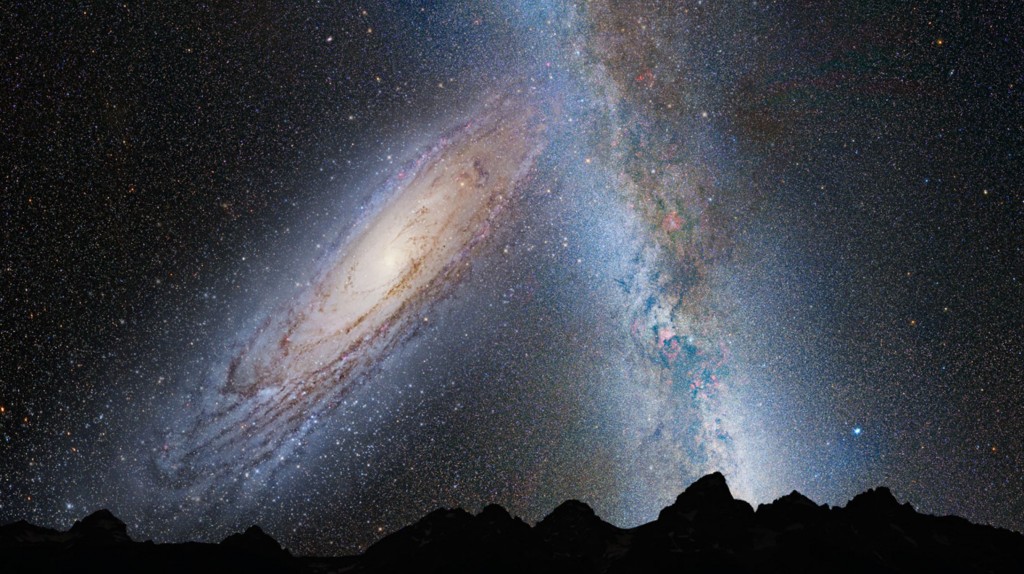 The Earth’s night sky in 3.75 billion years when the Andromeda galaxy begins to distort the Milky Way with tidal pull (Wikimedia Commons)

Christian Smorra is the lead author of a paper published last week in in the prestigious science journal, Nature, concerning a parts-per-billion measurement of the antiproton magnetic moment. He concluded, “All of our observations find a complete symmetry between matter and antimatter, which is why the universe should not actually exist.”

Okay, I admit that living in a universe that shouldn’t exist is quite exciting. My heart rate increased as soon as I saw the headlines in the popular press. Apparently, the measurement of an antiproton magnetic moment with no discovery of asymmetry was not enough of an attention grabber.

Why shouldn’t the universe exist according to Smorra? Physicists making extremely precise measurements as part of the Baryon Antibaryon Symmetry Experiment (BASE) collaboration at the European Organization for Nuclear Research (CERN) found no asymmetry between matter and antimatter. This apparently is a problem.

Why is there such a fuss? We see a lot of matter around us. Antimatter, in contrast, is quite scarce. Particles and antiparticles annihilate each other when they come in contact. So why did all the matter and antimatter in such close proximity at the time of the so-called Big Bang not completely annihilate one another? Scientists have long postulated some kind of asymmetry of particles and antiparticles to explain the relative abundance of matter that we observe in the current universe.

Antimatter usually doesn’t exist for very long because it is destroyed if it comes in contact with any matter such as atoms in air or the sides of any conventional container. Thus, antiprotons had to be artificially generated at CERN and then cooled to approximately absolute zero. Electrical and magnetic fields were then used to capture the antiparticles in a complete vacuum with 10 times fewer particles than even interstellar space. This research took 10 years and is very important despite the startling conclusion.

The experiment really was more about what was not discovered instead of what was discovered. Just because the desired asymmetry was not yet discovered does not mean that it does not exist. Or is it possible that all of this undiscovered knowledge could lead to a paradigm shift?

Researchers have looked for a difference in mass, electric charge, and now magnetism, but so far the particles and antiparticles have proved to be amazingly symmetrical. Researchers are now hoping to study antimatter’s antigravitational effect. In other words, would antimatter fall up?

Everyone should be able to acknowledge that certain patterns do repeat in nature. If a pattern repeats with enough regularity that no exceptions are observed, then a scientific law is formulated to make predictions about how similar natural phenomena will occur in the future. Yet the absence of observed evidence to the contrary is not necessarily the evidence of absence. In other words, just because we have not observed something does not mean that it cannot exist.

Smorra had not mentioned God or miracles, but for many theologians, his conclusion was a vindication of the belief that the creation of the universe was miraculous in nature. If something shouldn’t happen in nature, and yet in happens anyway, then it must be a miracle according to many traditionalists.

God is great and God is good. Yet living in a universe that shouldn’t exist seems akin to the well-worn God of the gaps trap. In other words, if something happens in nature for which science currently has no rational explanation, then it must be miraculous. Who said that God has to be miraculous? What does the word miraculous even mean? Why couldn’t God operate according to yet undiscovered natural laws that he created according to his nature that we do not yet understand?

Rather than living in a universe that shouldn’t exist according to the patterns that we’ve observed in nature, I propose that we live in an Infiniverse where anything that can happen, will happen an infinite number of times? Instead of repeatedly discovering the momentary limits of our knowledge and then exclaiming that the universe just shouldn’t exist like this, we should imagine an Infiniverse that can accommodate anything that we might discover or not discover.

In an Infiniverse we would have to acknowledge that we could never know or understand it all. Then there would be no reason to believe that we are living in a universe that shouldn’t exist. Yet the prospect that we can someday understand all the laws of nature is too tempting for some people.

All of this reminds me of what Robert Jastrow said in God and the Astronomers, “For the scientist who has lived by his faith in the power of reason, the story ends like a bad dream. He has scaled the mountains of ignorance, he is about to conquer the highest peak; as he pulls himself over the final rock, he is greeted by a band of theologians who have been sitting there for centuries.”

You may write to Yoeli Kaufman at yoeli@israeliupdate.co.il

About the Author
Yoeli Kaufman earned his bachelor’s degree in Near Eastern Languages and Cultures and then worked as an analyst and Arabic translator for U.S. Army Intelligence. His master’s degree was in Educational Administration from Temple University in Philadelphia. Eli now regularly writes for the Jerusalem Post, the Times of Israel, and Diario Judío México.
Related Topics
Related Posts
Comments
Advertisement