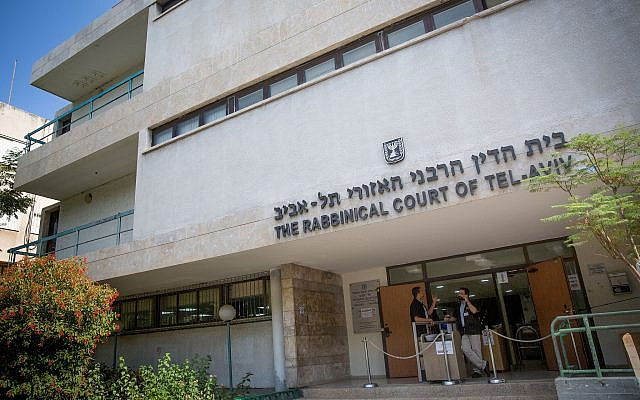 The Rabbinical Court in Tel Aviv on August 3, 2017. (Miriam Alster/FLASH90/File)

The Magistrate’s Court in Petah Tikva recently ordered a private rabbinical court judge in the town of Elad to compensate a woman who was threatened by him when she did not follow the orders of the court. This rare ruling sheds light on the widespread phenomenon of private rabbinical courts, which operate mainly in ultra-Orthodox society. This is a very central sign of the loss of state sovereignty, application of the law, and the ability to protect the ultra-Orthodox from a dictatorial community regime that deprives them of justice. Private courts may exist, but in order for them not to become a mechanism of community repression, the state must act by means of the law and enforcement to regulate distinct criminal sanctions and civil legal relief, in cases where the community casts fear on its sons and daughters.

Dozens of private rabbinical courts operate in Israel, all in the Orthodox community. There are those that operate among the national-religious public, but most of them are active in the ultra-Orthodox society, and engage in “monetary law” — usually small-scale financial disputes. Some of these courts also deal with marriage and divorce. The main motivation for their work, and the incentive for litigants to contact them, is religious. Since the courts in Israel operate in accordance with state law, and not on the basis of the laws of the Torah, there is a halakhic prohibition — “Issur Arkaot” — against turning to them in matters where there is a solution in Jewish law. Therefore, in the opinion of many religious people, the appropriate solution in the event of a dispute is to turn to a private rabbinical court that adjudicates according to rabbinic law.

This phenomenon in itself is positive. In a democratic and pluralistic state, it is appropriate to allow people to act in accordance with their faith, even when it comes to resolving legal disputes. In addition, the state benefits from the fact that disputes that would otherwise fall on the over-burdened legal system are directed to private courts, the work of which is funded out of the private pocket. Israeli law itself recognizes alternatives for out-of-court resolution of disputes and gives them legitimacy. Parties to a dispute may apply for mediation (within or outside the court) or for arbitration, which Israeli law has established through the Arbitration Law.

The problem is that the basis for the private courts’ legitimacy is the free choice of the parties to be heard by them, and in many cases, in ultra-Orthodox society, “free choice of the respective parties” is not the situation. This is a community that has worked for decades to build walls around itself; many ultra-Orthodox people have made it their declared aspiration to create a system of social, community, and religious services that is not connected to the state. “In return” for these “communal goods,” they require total obedience to the rules of the community from its members, no matter how extreme. Those who do not obey and deviate from the decrees of the rabbis and politicos, are severely punished. They are denounced in accusatory notices on wall posters. Their children are expelled from community educational institutions. If they study in kollel (an important source of income for many), they are expelled. They are not able to pray in the synagogue. And it can be assumed that their former friends are turning their backs on them by the next day.

This reality has a direct and dangerous impact on legal disputes as well. Apart from the religious interest of litigation according to Jewish law, the ultra-Orthodox community has a great interest in litigation within the community. It provides for “washing the dirty laundry at home” and keeping conflicts that show the community in a negative light within the community. In some cases, especially when it comes to cases brought by those in power (who themselves often rush to the courts) against ordinary people, it is not at all unreasonable to assume that the courts, which are subordinate to the community system, will be kind to those in power and rule in their favor.

Therefore, in a not insignificant number of cases, litigation in a private court instead of turning to the [secular] courts is not really the result of free choice. The litigants, especially the weaker ones, are forced to go to the private court because they know that if they do not, they will be cast out immediately and their world will come crashing down. In the ruling I mentioned earlier, and in other cases, the community regime is described as threatening and sometimes violent. Those who do not obey its authority receive threats, violent attacks, and shunning, in the form of “kitvei seruv” (a kind of contempt-of-court order) that turn their lives into hell.

The existence of a violent community regime will erode the sovereignty of the state. Applying to a private court is one thing; community coercion before that private court is something completely different. In order to preserve its sovereignty, and rescue the weak and the persecuted, even if they are ultra-Orthodox, the state must resolve to exercise its authority. One way to do this is by means of existing legal tools, but a better way is to establish unique articles in the criminal law that would make community coercion of this type an offense, as well as civil injustices that would be met with automatic compensation in cases where community coercion is used as a result of turning to the courts.

Ultra-Orthodox society strives to raise the walls between it and the rest of the country, and to continue to maintain a “state within a state.” This has legal ramifications that involve a serious violation of justice and sovereignty. If the state wishes to apply its sovereignty to the ultra-Orthodox as well, alongside granting rights of religious freedom, it must act resolutely when those rights are trampled on.