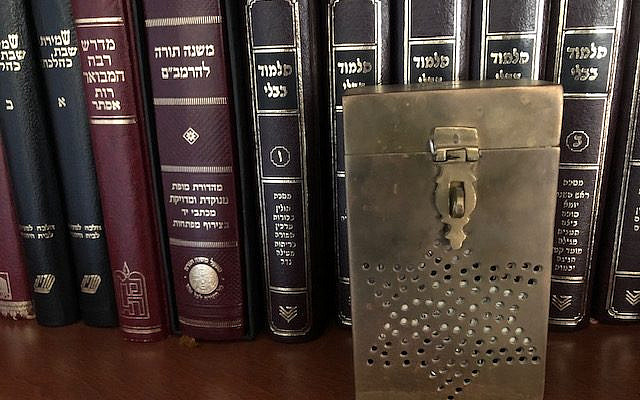 If you had the Holocaust education I did, in the 1980s, you certainly would have been assigned more than one essay with the list. The list of things you would put in your suitcase if you were given just five minutes to pack. Such an education would most definitely not pass muster today. We were constantly reminded that we were the beneficiaries of dumb luck, having ancestors who had ended up in the U.S., running from poverty, or pogroms, or towards the imagined promise of the Goldene Medina. That we could just as easily have been among those six million. That we should live our lives as if the Nazis were just around the corner, prepare for the eventuality. We played out week-long psychodramas where we pretended we were actually in concentration camps and told real feeling stories of being snatched from our homes, watching our parents shot in front of our eyes.

In an attempt to have us act as canaries in the coal mine, we were taught Holocaust history with an urgency that I never again encountered in my history education. We needed to know exactly what had happened, and when, and how. Unlike in later years, we weren’t being prepared to refute Holocaust deniers on our leafy college campuses. We were being taught so that we would be able to detect the stench of fascism as soon as we got the merest whiff. We were taught all of this with a desperation that said – we are comfortable here. We may be too comfortable. When they come again, in a new form, we won’t even take note. We will be like frogs in the water, completely unaware that the boil was on its way. The question, in the end, wasn’t if we would encounter new Nazis. It was when.

Nearly thirty years later, it’s hard to believe, but today I’m finding myself defending Arnold Schwartzenegger. He’s a man with many faults, both political and personal, and I don’t generally look to him for moral guidance. If you haven’t yet seen the video the former governor of California posted, you can find it here. Warning – it’s seven and a half minutes long, but it’s worth a watch.

In the video, Schwartzenegger recalls what it was like growing up in the direct and immediate shadow of the Second World War, with a father who had fought for the Nazis. He notes painfully that his father, and most all the other fathers that he knew, lived lives filled with violence, drunkenness and anger as they found themselves unable to assuage their guilt. He reveals with a great deal of candor how that violence and anger was often directed towards him and towards his mother.

Also notedly, the former governor compares the breaching of the Capitol to Kristallnacht. There is the obvious comparison of broken windows and loss of life, of mobs and state actors. And like almost all historical comparisons, it is an imperfect one. But there are aspects of the comparison that are apt. For a number of years, I lived in a community where all of the people of a certain age had left Germany right after the horrible events on that night in 1938 convinced them that there was no riding out the reign of Adolf Hitler. So they got out, and got out fast. But still in the weeks and months that followed too many German Jews and people around the world saw those deadly pogroms as an aberration, and failed to act, leading to disastrous consequences.

Certainly, with some investigation, we could find a more perfect analogy, taking into account the specifics of Wednesday’s coup attempt. TOI’s own pages have suggested that these events more closely resemble political violence in Bangladesh and Cameroon. On its face, this may be true. But Schwarzenegger here is drawing from his own experience, and, to be frank, using a reference readily accessible to an average educated American, which is something that would be hard to say about those other examples. In fact, assuming that his listener knows the specifics of the events on November 9,1938 is already a stretch. Imagine yourself how many Americans would be spurred to action with the mention of Cameroon. Exactly.

People, Jews in particular, who are upset by the invocation of the Shoah, point out that nearly 100 Jews were killed on Kristallnacht, that the activities were maybe more explicitly orchestrated from above, that there was no pushback by local, or national police. All this is true. But here’s my question. If we are ever to learn anything from history, do the comparisons have to be a perfect match? Can we never invoke the events leading up to the Final Solution, save if a guy named Shmadolf Shmitler rises to power and unseats Angela Merkel?

-Up until that night there had been lots of signs that the situation for Jews in Germany was becoming more precarious. Many willfully ignored these signs to their own peril.

-Kristallnacht was a turning point, or had the potential to be. If, in its aftermath, world governments had gotten together and taken a stand, if ordinary Germans had balked at the violence, if the Jews of Europe had seen this as the warning that it was, things might have looked very different.

-The events of November 9-10,1938 revealed that the cancer of antisemitism in Germany was not being held at bay by the forces of secularism and enlightenment, but rather had metastasized with the help of post WW1 populism and a new shamelessness egged on by Hitler’s own rhetoric.

-Kristallnacht was not dangerous because the attackers had too many guns. As terrifying as the prospect of a well-armed ‘militia’ certainly is, a mob of thousands can do tremendous damage without assault weapons. Take it from me, a victim of a violent attack that left me with forty staples in my head after I was attacked by a crazed man with my own family picture frames. Or from the example of the officer who was killed at the Capitol – beaten to death with a fire extinguisher.

There will always be people who misuse the example of the Shoah for their own purposes, something we have seen evidence of over the last couple of days, as right-wing pundits have invoked the Holocaust when decrying the fact that they can no longer Tweet with impunity. But we dare not let their shameless uses of our history keep us from learning from our own past.

Judaism has always responded to changes in the world around us. We reference our enemy Amalek even when it has a different face and a new name. Every year just before Purim we remind ourselves of the obligation to confront said enemy with the full knowledge that they will not be wearing ‘Camp Amalek’ t-shirts.

If the memory of the events surrounding the Holocaust is so precious that we leave it locked in a silver box on a high shelf, then we have utterly failed as transmitters of that history. My own teachers may indeed have gone too far, as steeped in their own trauma as they surely were. But if we are forever waiting for some sort of perfect fingerprint match to invoke the memory of that horrible time, polishing our precious locked box and putting it back on the shelf, there is little question it will be too late.